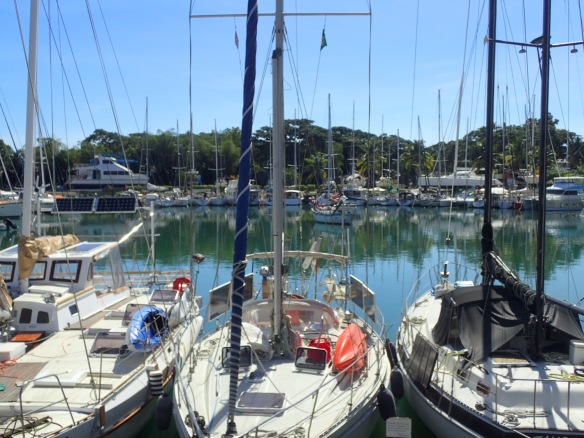 We have found the best spot to pass the time of day in the marina is sitting at the outer table in the Boatshed Restaurant and Bar. Not only is the view great but there seems to be a permanent cooling breeze even when there isn’t a breath of air onboard Raya. In the evening as the marina is full of cruisers, here to reprovision or get repairs, the atmosphere is very sociable, from 5.30 onwards the Boatshed is again the place to be.

View from the Boatshed Bar

The cruising community in the Pacific is really quite small, so when fifty or so boats are all in one place we can pretty much guarantee there will be boats around that we know. Just in the last week in the marina or nearby we have bumped into friends from Full Circle that had greeted us as we were towed into Opua last October, kindly giving us some food after the New Zealand customs had stripped our larder bare.

On the oppposite wall to us is Freebird II skippered by the engineer who helped fix our engine and having left Opua, the day before us, shares the experiences of the horrendous trip up to Savusavu.

Yesterday, Started with a Kiss sailed in, our first contact with them was on the radio when we spotted each other mid passage between Bora Bora and Tonga and have kept in touch ever since. We spent a convivial few hours together in the Boatshed when they lured us into an evening of rather too many Mai Tais and today they have shared their anchoring waypoints for the Yasawa Islands, our next port of call.

Finally, a few boats around from them is Taistealai who we haven’t seen since they arrived into the berth next to us in St Lucia in the Cartibean, eighteen months ago, having both just finished the Atlantic crossing.

We have also met a whole new group of boats, having been so tightly squeezed together it would be impossible not to make friends. To starboard there is a large yacht that helped guide us in to our tight berth, they have a three year old red head, as I glimpse him running back and forth I keep getting flashes of Matt at his age. On the other side of us is a boat from the World ARC, a rally that circumnavigates the globe in just 16 months. We had a very enjoyable evening with a group of them on Friday, their timetable takes them off to Vanuatu this Saturday, they will be in South Africa by Christmas, it’s exhausting just chatting with them.

Unusually alot of this chat has been about the unfortunate catalogue of medical problems that is besetting the crews at present. One person has been laid low with a horrible viral infection caught from a mosquito bite in Tonga, Dengue Fever. Another has a serious intestinal problem and is having to be flown out to New Zealand and yet another guy is in hospital with a badly broken leg having somehow fallen off the dock walkway into the water. The rustle of papers fills the marina as its occupants are prompted to check out that their medical insurance documents are in order.

Talking of insurance, Vuda is known as a cyclone safe haven. On the protected side of the island and with numerous cyclone pits many people persuade their insurance companies to allow them to keep their boats here during the summer instead of sailing to lower latitudes as we do.  The cyclone pits are long thin 6ft deep trenches cut into the ground, where wedged in with tyres, boats sit hoping for some protection from the violent winds. They have proved effective in the past but I’m not sure we would feel happy enough to leave Raya in one. We have met people who were here during Cyclone Winston, Vuda was not hit badly but nearly twenty yachts dragged on to the reef further east ﻿in Savusavu. One captain told us how he motored against 130kt winds and zero visibility ﻿for four hours to keep his boat from breaking away from its mooring. 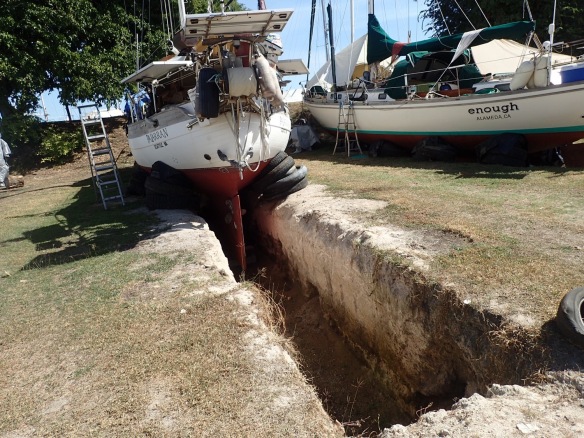 I think we’ll keep to our plan of spending the summer in Australia.﻿
﻿

3 thoughts on “Friends in Vuda﻿”