Lanzarote? We can’t quite make it out, it seems to be lacking in something but we just can’t put our finger on what that something is. We have had mostly very grey, hot and humid days, which have made us and many around us rather lackadaisical, I have picked up a tummy bug and living on a boat is not the best place to have one of those, perhaps these things are all colouring our feelings.

We have spent most of the week mooching about the marina. Marina life is rather odd, Raya is moored directly below the walkway by the restaurants, so we are permenanently on show and frequently the background of people’s photographs. We in turn watch back, as people seemingly from another world enjoy their holidays. We feel out of place trudging through the tourists, dressed to promenade or dine, loaded down with laundry or shopping or walking to the showers towel around your neck and hair dripping. But Marina Rubicon is better than most, we can swim, eat and shop all within the complex and on Saturdays and Wednsedays there is a lively handicraft market. Not too bad a place to be stuck feeling a bit below par.

After our arrival Friday, Ricks first job was to check out the hull for any damage caused by the mystery collision on the passage over here. He donned his scuba kit and braved the rather murky water. Thankfully the only thing he found was a insignificant mark on the keel.

On Tuesday we hired a car for a day to explore the island and visit some of its tourist spots. Being a volcanic island that had its last eruption less than two hundred years ago, a lot of the interior would not look out of place among the pictures sent back from the Mars Rover Mission. It is incredible, barren and harsh and not a sign of life for mile after mile. Unfortunately the only way to tour the interior of the Timanfaya National Park is by coach with its accompanying bad audio guide in Spanish, English and German. Coach tours are one of my husbands pet hates, his stony expression inside the bus was almost as severe as the landscape outside. 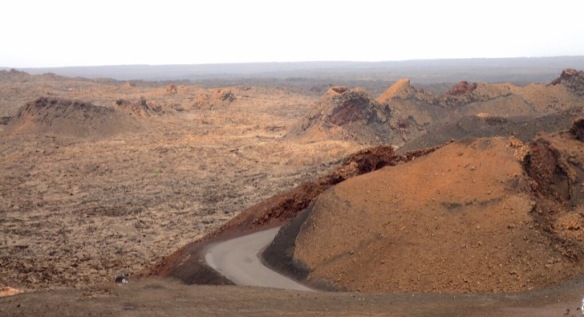 We stayed with the volcanic theme but with a brighter note, visiting a couple of sights where large air pockets created in the lava from eruptions 3000 yrs ago have been converted by the sculptor, architect and island hero Cesar Manrique, into useable spaces. At the Jameos del Agua an open tunnel through the lava has been converted into a garden/restaurant/concert hall. Inside the tunnel is a dark shallow pool containing a unique species of blind albino crabs and in the Jameos, a crater formed by the collapse of the tunnel roof, the garden was full to bursting with palms, cacti and succulents all surrounding a crystal clear blue pool.

Our next visit was to his home where he had imaginatively created rooms and incredible outside spaces in the bubbles that had formed in the lava. It has been preserved as an attraction and holds a collection of his work and pieces of other artists including Miro and Picasso that he had gathered during his life time.

The red bubble at the Cesar Manrique Foundation

We have ourselves been dabbling in the art scene this week, finally buying a picture for the salon wall. As yachts aren’t really good places for fine art we decided we would use it as a place for a rolling display of the pictures, fabrics etc we pick up along the way. Well that was all good in theory but hard to fulfill in practice, a blank space has been staring at us since Raya became our home in March. Then a couple of days ago the oil below caught our eye in a local gallery, it fits the bill exactly.

We did plan to sail onto Las Palmas tonight but I’m still feeling a little fragile, so we have our feet up and our books out. We shall sail tomorrow.

6 thoughts on “Languishing in Lanzarote”