We have left ARC World, in Rodney Bay, for a few days to take Roz B, who flew out to greet us, for a couple of days sailing. It feels great to have escaped the heat and intense activity of the Marina and fantastic to finally be swimming in the warm Carribbean sea but we sit in a place of contrast.

Anse Chastanet is a beautiful bay surrounded by steep wooded cliffs that drop right down to th sea. In the foreground is a pretty resort that sits nestled in the vegetation and where we had a very nice lunch yesterday. The background is dominated by Petit Piton – the pitons are the symbol of St Lucia, volcanic conical peaks that create a very dramatic landscape. The sunlight twinkles off a green sea reflecting the trees that enclose it, we are tied to a mooring bouy with just two other boats, it should be extremely tranquil. 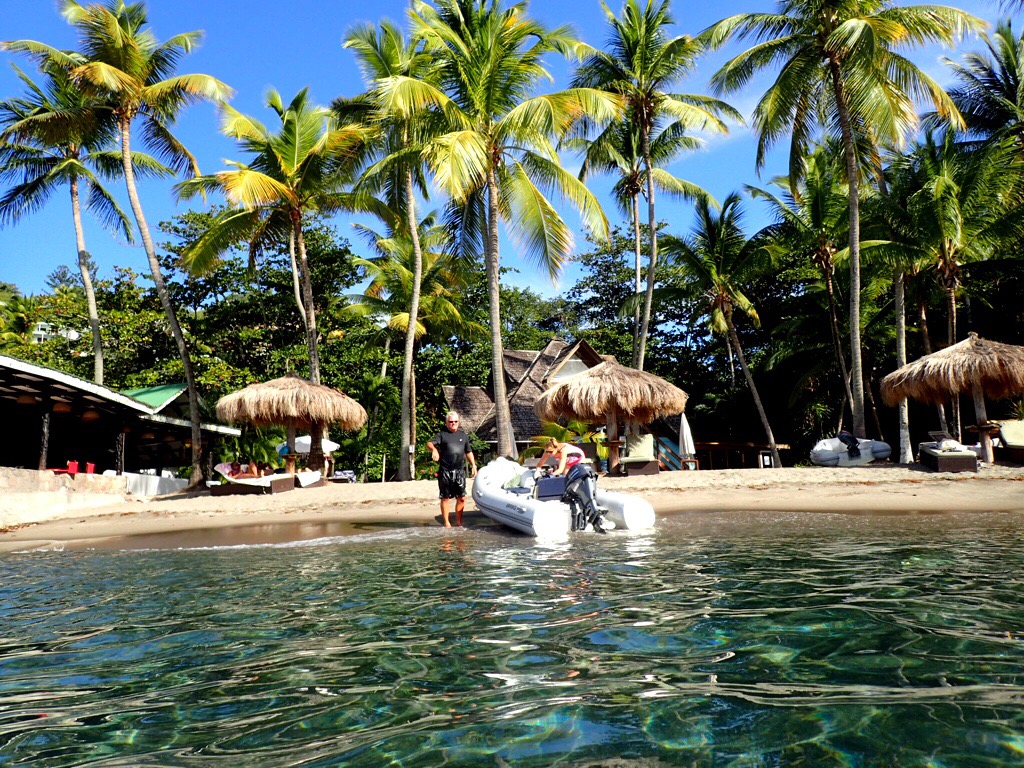 Unfortunately our relaxation is tempered, there is a small swell that is rocking the boat just a little too much and we have been plagued by a swarm of tiny flies that has found us and our food.

The real tension however comes from the boat boys that aggressively insisted on helping us pick up a mooring, demanding money for their service. They have been followed by others that continually buzz past us in a selection of rickety craft showing more interest in our boat than feels comfortable. Last week we were visited by the General Manager at Rodney Bay Marina, the day before Eric, Roz and I had dragged one of the security guards from the water, he was completely out of it, not having a clue where he was or what was happening, had we not been passing when he wandered oblivious off the end of the pontoon I’m not sure he would be with us now. I felt obliged to report the incident not just for the security of the boats he is meant to be protecting but for his own safety. So it was that the English marina head came onboard for a cup of tea and we discussed amongst other things the perception of crime on St Lucia that is damaging the tourist trade. Sitting in this lovely bay, although nothing untoward has happened, that perception is unfortunately being re-enforced.

For the first few days after our arrival, life past in a daze of exhaustion and  excitement. We revelled in our achievements and the congratulations of others, as all our fellow competitors, sorry participants, began to arrive and the emails and messages from home flooded in. Our smugness only increased, when wandering the dock we discovered Pixel, the boat and that had pushed us the most, was a full on, open cockpit racing boat, with eleven professional crew hot bunking and surviving on a minuscule ration of water to save weight. Bonkers!

In quiet moments we reflect on the crossing, we all agreed the ‘racing’ had added to the fun, but overall that the whole experience had been more straightforward than expected. It seems we had very few breakages or problems compared to most and that most boats had used much more complicated routing than ourselves. Our success seems to be down somewhat to our ignorance, a lot to our meticulous preparation but mostly to the brilliant boat we have in Raya.

7 thoughts on “Reflections on an Island”