We spent a couple of days in Shelter Bay Marina, going through the process of admin and queuing for our turn to go through the Panama Canal. Onboard, every yacht has to have four sturdy lines, a minimum of 125ft long to reach up the high walls of the locks, plenty of fenders to protect the boat and four line handlers as well as the skipper on the helm. You are visited by an Admeasurer, a Canal official who measure the boats dimensions, checks that the boat can motor fast enough to keep up with the Canal traffic, is in good working order and has all the appropriate equipment. Raya passed on all fronts except we were one man down, we spent a few anxious hours asking around to find someone available to come through with us and finally found an experienced local guy who could help. It was then a waiting game until a slot became available.

Shelter Bay is the site of an old American base, when they handed the running of the Canal over to Panama at the beginning of 2000 the area was abandoned and the houses and streets are being rapidly claimed back by the rain forest. Just a couple of hundred metres from the marina is a 30min walk around an old road called the Kennedy Loop. On either side of the road is thick encroaching jungle, full of animals, birds and insects. It was great fun being able to walk through the undergrowth and see it close up while still being on the safety and comfort of talmac. There was great excitement as we spotted a band of monkeys leaping high above us in the tree tops. We were fascinated by a trail of busy ants, hundreds of them loaded down with bits of leaf they were carrying back to thier nest, so industrious had they been in their task that they had worn a path through what to them must have been giant leaf litter and sticks on the jungle floor. We could hear many types of birds flying between the trees and spotted flashes of exotic colourful feathers and above our heads sored a dozen buzzards. Last but not least we’re the huge butterflies of turquoise, orange and yellow fluttering between the flowering bushes. 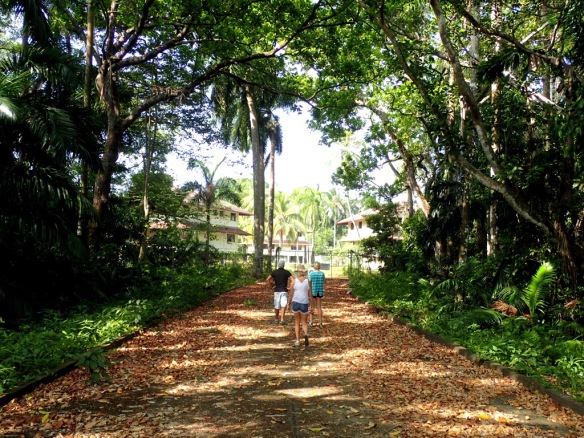 Rick our line handler also used his car as a taxi so we got him to run us to the viewing platform above the first set of locks we would go through, Gatum Locks. We watched as a huge tanker squeezed in through the side walls and was slowly lifted up ten metres. The scale of this incredible piece of engineering became clear, especially when we moved on to view the new locks they are building to accommodate even larger ships, where still in construction, we could see its massive bare bones. We came away more apprehensive than ever.

The marina itself promised much but delivered less. The entrance led from the Cristabal Harbour and was very close to the action at the beginning of the Canal but was totally isolated on shore and was miles from anywhere .The mini mart on site was always late opening and rarely had much for sale. Sheridan and Jonathan bravely took a taxi 30mins to the nearest town Colon, a rather run down place that supports the activities around the running of the Canal and where we were warned it was unsafe for tourists to wander on the streets but they did find a supermarket and picked up a few supplies.The marina staff were friendly and tried to be helpful but  everything was rather disorganised. The food at the one restaurant was okay but the service was so bad it was agony to eat there. There was a pool to cool off in but too small for lengths and a wifi service that at best was intermittent.

Luckily our agent Alex whom we had hired to organise our canal transit has got us a cancellation spot, we leave tomorrow.

2 thoughts on “Waiting our turn”