I’m on laundry watch, the sheets are drying perpendicular to the decks and despite each one having ten pegs attaching it to the line I don’t want to take my eyes off of them. Rick remarked, as the bun on top of his burger flew off accross the restaurant “you know it’s windy when there are waves in your wine glass”. For the last week at least, Panama City has been the Windy City.

We spent a couple of nights in the Hilton to say goodbye to Jonathan and Sheridan and explore. It was a big holiday here and most things were closed for four days, so it seemed a good time to take a small break. It was carnival time and each night there were fireworks and the main sea front highway was closed for entertainment and parades. The security was very tight, I have never seen so many police and to enter everyone was searched. It all seemed rather unnecessary as the crowd was mostly made up of families, everyone was happy and good natured. The floats in the parade were suitably over the top and the music set the Central American scene but it was difficult as outsiders to feel involved, we moved on to explore the old town. 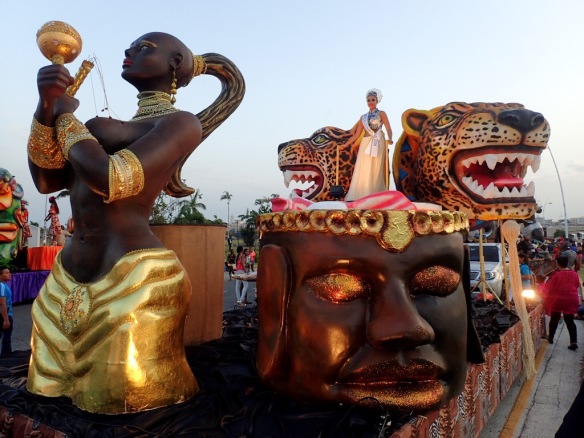 Dating from the seventeenth century, a time of Spanish domination, it almost feels European.  Until recently the whole area was very run down but as the rest of the city  went through a huge expansion, tower blocks springing up everywhere, gradually the value of this piece of land has increased. Entrepreneurial youngsters began doing up properties and soon the authorities and private investors moved in. The area is now very smart, full of trendy restaurants and beautiful houses, with the odd incongruous slum tucked in between to remind everyone the job isn’t quite finished.
Back at the boat we are moored in Flamenco Marina with Panama City as a backdrop. There are only a couple of other yachts here it is full almost exclusively with brash, high sided, sports fishing boats. Despite our bag of a dozen different electrical connections we can’t connect to the power supply and are having to rely on our generator. There are so few women here that the ladies shower block is kept locked, so to use the toilet I have to request the key from the marina office and once in, the facilities are clean but basic. We are moored right by the entrance and in these windy conditions the berth is rather bouncy and the ‘Free’ WIFI is non-existent. At over $150 a day it has to be the least value for money marina we have been to. However, we need to be tied up for a while to get everything done for the long passages ahead. 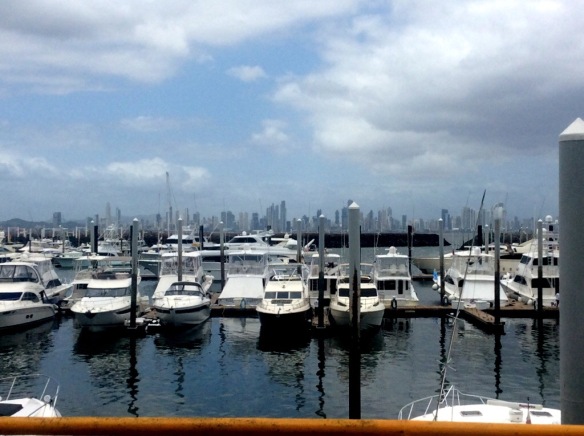 We look for the positives. It is fun to be back in tidal waters, we are rising and falling 5m each tide, the wind although strong, tempers the high temperatures and the bird life is incredible. Buzzards ride the thermals on the surrounding hills, flocks of Pelicans glide by and dive for fish feet from the boat, a multitude of seagull species take it turns to fill the pontoons, frigate birds lurk menacingly above us and there is even a small tame crane that patrols the docks. However, it is the prospect of what being here means that is the real source of our smiles – the Pacific adventure begins.

If we thought preparing to cross the Atlantic was a challenge we now have the prospect of there being little in the way of supplies or services until we reach Tahiti in about four months time.

We have pretty much sorted the boat out, the generated has been serviced, Rick has attached the new solenoid to the gas cooker and most routine checks are complete. However the domestic chores loom large, the boat needs cleaning top to bottom, the provisioning task is huge and there is the remainder of the laundry that needs watching.