The novelty of the sea lions on the swim deck wore off abruptly when in the middle of the night I popped my head up to check all was good with our anchor, only to discover a huge male lounging in the cockpit on our cushions. That he had managed to get up the back and on to the deck was a bit of a shock but we were to discover they are a lot more acrobatic than we thought. He was very reluctant to give up his comfy spot but he eventually moved back to the stern when I shoo him away. However he refused to retreat down to the swim deck, as I walked towards him he leapt towards me, barking and baring his teeth. I jumped back with a scream, grabbed the boat hook and a faux battle commenced, eventually after a few threatening stabs towards him I finally persuaded him to back down. I blocked the gate as best I could with buckets and tied lines across between the stantions. The most disconcerting thing was not my ten minute fight on the aft deck but the fact that none of my fellow crew members so much as turned over in their beds! I returned to nightmares of one falling through the hatch on top of us while we slept. What we ask ourselves would you do with 100kgs of angry sea lion below decks?
Rick tried tying a criss-cross of ropes across the swim deck but they just wiggled between it all until they found a comfy spot to sleep and then complained noisily when they had to untangle themselves to get back into the water. So then he tried hanging all seven of our large fenders off the stern but they just push them aside and slide underneath enjoying the shade they provided. However it does seem to prevent them getting up on deck, so we have come to an uneasy truce.

In search of less awkward wildlife we took a tour to the highlands. Here there is a fresh water lake in the caldera of an old volcano, El Junco lake. There is rumoured to be lots of wading bird life and extrodinary views across the island, unfortunately for us, we climbed up into the clouds and could see nothing more than a round body of water. We descended back down to our taxi and continued on to the Giant Tortoise Breeding Centre, La Galapaguera. These lumbering beasts are truly gigantic, many of them sixty or seventy years old. Each island has its own indigenous sub-species, all of which became endangered and some species extinct after years of providing fresh meat for passing ships and latterly by the introduction of goats that ravaged their food source. Most of the goats have now been irradicated and the breeding centres are making good progress at re-establishing sustainable populations. We spent a fascinating hour or two watching them wander about there large park. We found a large group at a feeding station, two of which were competing for the attention of a smaller female. To show you are top dog each tortoise stretches his neck as high as possible, the highest stretch wins the girl.

To finish the morning we stopped for a cooling swim at a beautiful cove, the waves crashed against the rocks and for a moment we almost could have been in Cornwall. Reality soon hit as a seal lion emerged through the waves and called for her pup, that emerged from the rocks and excitedly waddled towards her, the rocks themselves appeared almost alive as they heaved with a thousand small black crabs and then we realised some were actually alive they were small marine Iguanas. 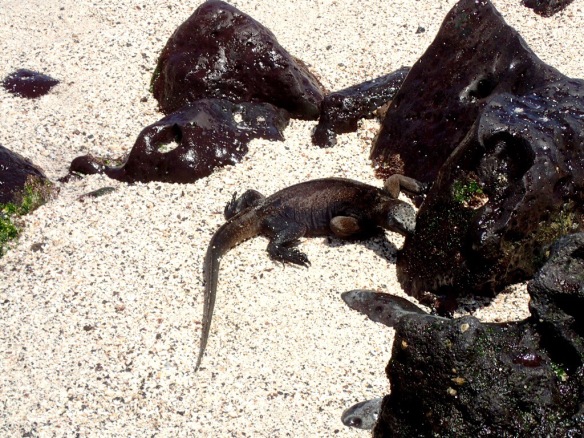 We returned to a busy Wreck bay, close in are thirty or so local fishing boats, to the east is the navel base and a couple of grey navy vessels, the yachts at anchor had increased to ten boats and there were a dozen small cruise boats busily transferring passengers on and off. All along the shore, on every rock, inch of beach, step and even sea front road are hundreds of sleeping sea lions and between them all buzzes three or four water taxis or ‘Taxi Aquatic’. We can call them up on the radio, and in the absence of anywhere to land our dingy, use them to ferry us to and fro from the dock, a dollar per person per trip. 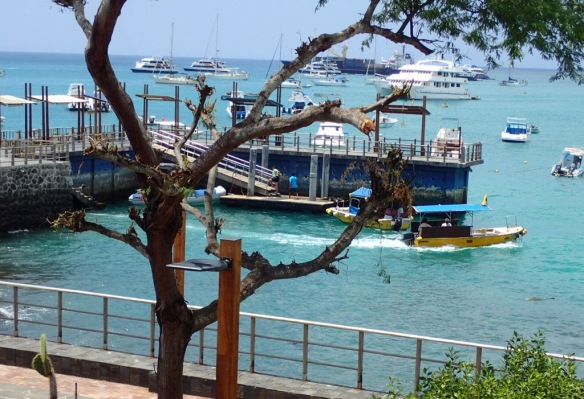