We have just finished the first one night sail we have done for a long time and we are both shattered. The problem with a single night sail is that it takes time to get into the rhythm of the watch system, we both had a sleepless night. We have arrived in Taiohae the main town on the island of Nuku Hiva and the administrative centre of Marquesas. There is promise of minimarts, restaurants and fuel. The anchorage seems calm so we plan to stay a few days, sleep and get a bit sorted out.

We have spent the last five days anchored in the Baie Hanavave or Bay of Virgins as it is commonly known, on the most southerly island of the group, Fatu Hiva. The bay is surrounded by dramatic columns of rock, it is startlingly beautiful. The water is clean, clear and dark blue over the black volcanic sand and when you look below the surface it as if you are swimming in a huge pot of transparent royal blue ink. 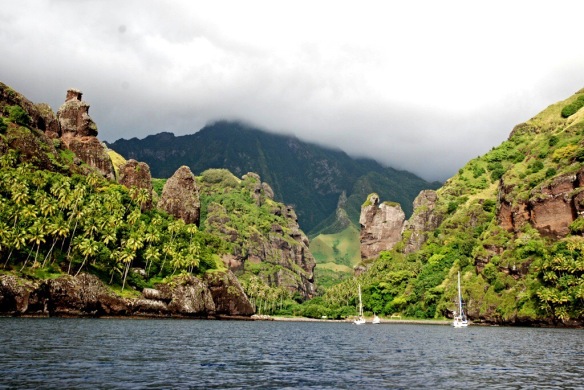 There is again a small village that straggles up the hillside away from the dock. There is a church, a school and a small shop. However the shop has little to sell, the supply ship we are assured will be in on Friday, come back then we are told. It doesn’t really matter with just the two of us onboard we don’t eat much and we have plenty of staples tucked away all over the boat and tons of fruit that we bought from a local boat that came out to the anchorage.

On Wednesday we joined an Australian couple, Margaret and Chris  from their boat Storm Bay, for the one hour trek to a waterfall. It was raining again but the scenery was as always wonderful, as the tall vertical cliffs on the coast gave way to forested hills the track got muddier and muddier. We abandoned all pretence of keeping clean and just splashed on through using the frequent fords we crossed to help wash the worst off our footwear. We had a sketched map that had been passed and copied between cruisers probably for years and when we came across a large digger we realised something was wrong. In fact it was creating a space in the forest for improvements to a hydroelectric plant, our path had been bulldozed, the driver pointed us back down the hill, we tramped on through even more mud, wary of falling coconuts as he cleared a swathe of forest behind us. 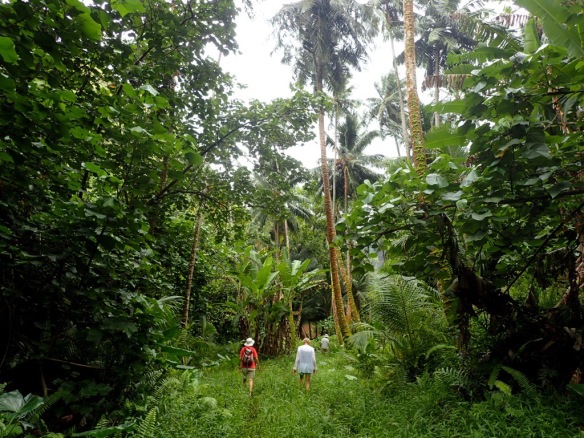 Finally we found the final steep path and we clambered over fallen trees, boulders and massive roots, every turn bought another intriguing view through the undergrowth down to a fast flowing stream. Our surroundings could have come straight from the set of Indianna Jones. The smell was fabulous, a mix of, sweetness from the hundreds of hibiscus shrubs that are everywhere, earthy tones from the rich soil and that ‘just mown lawn’ smell that came from the damp undergrowth. We reached the waterfall hot and dripping with sweat and revelled in the cool fresh water of the pool at its base. The diversity of plants was vast and tangled, definitely not the spot to drop your favourite sun glasses, despite a extensive search Rick’s will I suspect be lost forever to the jungle.

The next day we explored the coast line, the only word I can think of to describe the steep mountainsides here is corrugated, sharp ridges alternating with deep valleys created by the seemingly constant rain, the water plummeting down from the peaks above us. As they run down to the sea the valleys often end in small coves and we spent a pleasant hour or so motoring in and out of them admiring the shear faces of the massive cliffs and the trees that cling precariously to them. The trip was made especially memorable however by the large pod of dolphins we came across. Two meter long males right down to tiny babies swam all around us, low in the dingy we could almost touch them. We considered getting in to swim with them but didn’t want to frighten them off, so just floated quietly while they investigated us.

We woke Friday to a hubbub of activity in the normally quiet bay. Preparations were in full swing to welcome the supply boat, the Aranui, which has a second function, doubling up as a cruise boat. At midday it anchored at the entrance to the bay and using what looked like WW2 landing craft disgorged a multitude of boxes and hundreds of visitors. The villagers put out stalls of crafts and performed a traditional dance. We took the dingy into the very busy dock and tired up to some rocks. Mingling with the tourists we joined them to watch the girls of the village do their bit on the playing fields of the school but it seemed incongruous having so many people in what had been such a quiet place, we escaped back to the peace of the boat.

Saturday it was as if it had all been in our imagination, a couple of locals chatted on the dock, a few chickens pecked at the grassy verge and a lone dog walked up the street. We revisited the shop and here there were changes, we bought onions, eggs, cheese and biscuits just enough to get us to Nuku Hiva.

2 thoughts on “Bay of Virgins”