Today we have woken to clear blue skies and a bit of a hangover. We are anchored in what is described in Charlie’s Charts – a guide to anchorages in the Pacific – as the calmest bay in the Marquesas. Baie D’Ahona is narrow and indented about a mile into the northern coast, we are tucked into a cove at its furthest end that is completely protected by a headland from the ocean outside. We are surrounded on all sides by jagged steep mountains, on the shore is a beach of yellow sand, topped by palms and hibiscus trees, a typical Marquesian landscape in fact. A ghost of a moon is setting in the west, the morning sun is already feeling hot. 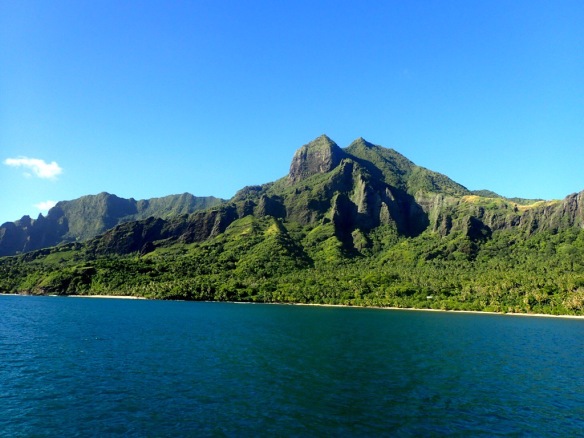 Last night, and the reason for the hangover,  Bob and Heather from Crazy Daisy who had sailed up to this bay with us and Scott and Tracy an Australian couple from their Catamaran Yolata who we have been bumping into ever since our arrival in Marquesas, came over  for a sundowner onboard Raya. Bob had spent most of yesterday with his head inside the seat where our freezer compressors are, trying to coax some life into them. He seems to be an expert on all the systems on the boat and we now have one compressor slowly cooling the freezer back down. We managed to repay him, in part, with an oval hinge that had cracked on his freezer that had made it rather dangerous to open. We are finding that cruisers are very generous with their time, expertise and spares.

We had the stern light shining on the swim deck to help people in and out of their dingies, with three dingies bobbing out the back Raya resembled mother duck with her brood of ducklings. When it was time for everyone to leave, gathered in the pool of light off the back of the boat was not just ducklings but a form of life that we had never seen before. Tens of wiggling, huge flattened worm like things, 6-8 inches long and about an inch across they had red and white stripes with sucker type legs. Everybody entered their dingies with extreme care and strangely nobody has gone in for a morning swim yet today.

Friday night, the night before we left Taiohae Bay we had monsoon levels of rain. The guys from Toothless were full of a plan to get up at 4am to track down the rumour of fresh vegetables, a rarity in Marquesas, at an early Saturday morning market stall. Chris persuaded me to join him – it’s all part of experience of being here, he encouraged – but we agreed if it was raining we would leave it. My alarm woke me to the sound of torrential rain crashing down on the deck above us, I got dressed but with no let up in the downpour I retreated back to bed. Chris did go ashore an hour or so later and kindly picked up some stuff for us as well, hooray we have tomatoes!

The rain had had a dramatic effect on the bay, muddy water flooded out from the rivers turning the water brown and carrying flotsam far out to sea . As we returned to the boat armed with fresh baguettes we had to weave the dingy around the coconuts and branches that threatened our outboard. The mountains above us were streaked with a dozen waterfalls, thousands of gallons of water cascading off the the peaks. 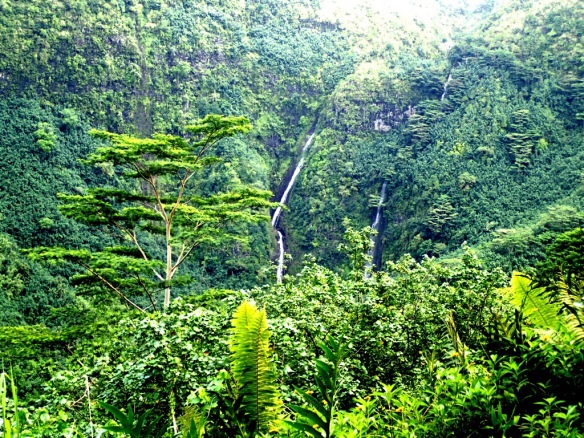 Water cascading down the hillsides

To complete the scene, onshore, a crowd had gathered under marquees above the beach to watch the inter island school canoe regatta,  indifferent to the conditions the boys battled hard in a series of races encouraged by the loud cheers from the crowd. Music came from the community hall behind them and women were setting up stalls of food.

We considered staying another day to join in the fun but our water tanks were nearly empty and we didn’t fancy making water from the now murky bay and we were keen to swim and explore somewhere new, so we set sail in search of cleaner, calmer waters. We sailed out of the bay straight into choppy seas, the wind was good but right on the nose, we motor sailed uncomfortably to the north of the island, wondering if we had made a mistake.

We haven’t, in Anaho Bay we are still, the water is clean and the view spectacular. And hopefully the wormy creatures of the night before have returned to the depths from which they came.

7 thoughts on “Wine, worms and waterfalls”