Good weather is still in short supply. The South Pacific Convergence Zone or SPCZ would normally sit just below the equator but since late April has drifted further south and is producing unsettled weather all the way from Fiji to the Marquesas. So it’s a bit of a cat and mouse game anchoring in the atolls, as I’ve mentioned the fetch across the lagoon can bring choppy conditions if you are caught at the wrong end of the atoll for the current wind direction. However with no accurate forecast for the local weather good decision making is more luck then judgement. So we have decided to just carry on with our plans the best we can. Thursday morning we set off for the southern end of Fakarava, being one of the larger and more frequented atolls there is a buoyed channel leading from the north anchorage to the anchorage 25nm away in the south, our plan however, was to join our friends onboard Toothless off the pretty beach at Hirifa in the SE corner, where, they told us it was very calm.

About halfway down the channel we would have to leave it and follow the East coast, this also had buoys on the main obstacles but we had no reports as to how good the charts were here. This route would require, what they call in the cruising guides, eyeball navigation, or ‘looking out’ to you and me. We scanned the sky for dark clouds and deemed the conditions good enough for the sunlight to penetrate the grey, for us to see the dangerous coral heads. Sea with depths of over 15m is blue, below that it turns increasingly to shades of turquoise, the paler the turquoise the shallower the water. I stood on the bows, Rick steered and studied the chart. It was quite a tense hour or so but turned out to be quite straight forward, I was managing to spot the turquoise patches at about half a mile and the Navionics chart was impressively acurate.

We had chosen this spot because it was calm and quiet, with few other boats, Toothless were here so they could relax while their two small boys swam off the boat. The South pass is famous for its shark populations, it is one of the scuba worlds “must do” dives and our next stop. Toothless however had just come from there and after a fantastic few days diving and snorkelling they watched a large tiger shark chase a turtle around their bows and decided it perhaps wasn’t the best place for the boys to swim.

Shark tales fill the VHF and inter boat chatter here almost as much as the weather, so when we took the dingy ashore to do some snorkelling and saw two black tips swim by, we entered the water with some trepidation. They were only three foot long and had no interest in us, we told ourselves to stop being stupid and had a pleasant swim amongst the shallow coral heads. At this stage I would often swim the three or four hundred metres back to the yacht but here, even though I know it’s illogical, somehow I don’t fancy the open water.

We have our now normal clutch of remora under the boat. They are great fun and shoot out for any scraps we throw to them. In the Caribbean a few years ago Stephen and I witnessed them scoop up a small tube of toothpaste ( don’t ask it’s a long story ). Well we have another one with tummy ache, while replacing an anode on the propeller shaft, (an anode is a sacrificial piece of metal that you attach to important metal fittings under the water to divert the degradation caused by electrolysis…phew!). Rick had tied the appropriate alan key to some string hung from his dive jacket, when he came to use it, it was gone. He swore at himself for toying such a weak knot, came back to the surface and I got him another one. With the job finished he noticed that the knot had not come loose, the string had been bitten through!  It definitely discourages you from dangling your toes in the water.

Another thing in short supply are our provisions. In the luxury department things are dire, beer is down to six cans, we have no white wine, no gin, no limes or lemons, only four squares of chocolate, no biscuits and the only fruit is one rather tired pamplemousse. The fridge looks very empty, although a fun challenge to start with, it is getting quite tiring each day trying to work out something tasty to eat. It is not that we haven’t got food, we still have lockers full of cans and jars, we are not going hungry, as our waistlines will attest to, its just the lack of fresh food. We haven’t seen  staples such as mince or chicken breasts since Galápagos and fresh fruit and veg have really been a challenge since we left Panama.

Sunday I stood staring into the bare void of the fridge, a couple of carrots and a few potatoes stared back, we had a whole chicken in the freezer, Sunday roast, l thought. 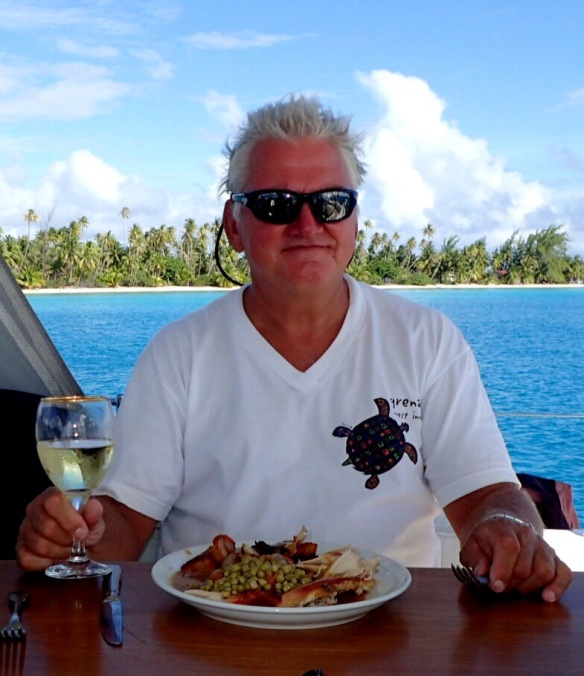 1 thought on “In Short Supply”