As we entered Faihava passage Rick spotted more whales, I rushed to the bows with the camera but they dived and were gone. The islands of Vava’u surrounded us, compared with French Polynesia they are relatively low and flat, but there are hundreds of them, some tiny, all topped with trees and encased in deep blue sea. We wound our way down a channel and motored through the narrow pass into the protected harbour of Neiafu.

Our first job was to check in at customs to formally enter Tonga. The concrete dock looked high and unforgiving, we did a circle as the two yachts already there squeezed up for us, Rick parked us perfectly as I rushed around lifting the fenders as high as I could to protect the rail. The wharf had deep grooves for the fenders to slip into and a lip perfectly placed to catch a yacht on the rising tide. Luckily the formalities were achieved quickly by the friendly officials and within an hour our passports were stamped, Raya had passed her health inspection, we had drawn out 500 Tongan Pa’anga and the yellow quarantine flag was lowered.

The customs inspectors informed us to make sure we attended Vava’u’s premier event of the year, to be held tomorrow, the Royal Horticultural Show, the King of Tonga, King George Tupou V, would be there to officially open it. The Tongan people dress conservatively and we were advised to ensure our knees and shoulders were covered. A ripple of panic spread through the cruising community as the normal uniform of shorts and T shirts was discarded.

Dressed in our Sunday best we walked the fifteen minutes to the high school playing fields. The show was delightful, a small version of a county show, with rows of stalls displaying fruit, vegetables, fish, and handicrafts.

Islanders ware set out for the judges, the odd things strung out in the lower right picture are squid.

Food stalls BBQ chicken kebabs, hotdogs and other less recognizable fare, the cake stalls had cinnamon buns, coconut cake and drinks, people milled around the attractions and jostled for patches of shade, all waiting for the Kings arrival. About a half an hour late his cavalcade of jeeps and cars drove right into the centre of the show ground and escorted by a large entourage he took his place in his especially decorated small pavilion. The Tongan national anthem was played and a series of long speeches ensued. Flagging in the heat, after about the sixth one having not understood a word, we quietly slipped away back to the boat.

We are hooked up to a sturdy mooring bouy in the middle of the mooring field close to town. It is very settled with land on all sides it feels like we are tied up on a lake. The surrounding hills are covered in trees out of which fly rather strange, large black birds. On closer inspection we notice they land oddly in the fruit trees, out come the binoculars, they are large fruit bats and the source of the high screeching we can hear.

Town planning and health and safety have yet to reached Tonga. Visually at least it appears less sophisticated than French Polynesia and without the European influence feels a lot more ‘foreign’. It is an independent Kingdom, with a close relationship to New Zealand who help with defence and foreign affairs. The GDP struggles, the largest part of the countries income comes from money sent back from relatives abroad, the most profitable export crop is vanilla but world demand fluctuates wildly. The majority of buildings are made of concrete, all different shapes, sizes and colours and all occupying ground at different levels. They are accessed up short steep hills, down winding staircases and over uneven kerbs. Dogs and pigs wander the streets, cars often old and rickety pass by slowly.  There is a sense of higledypigeldyness. 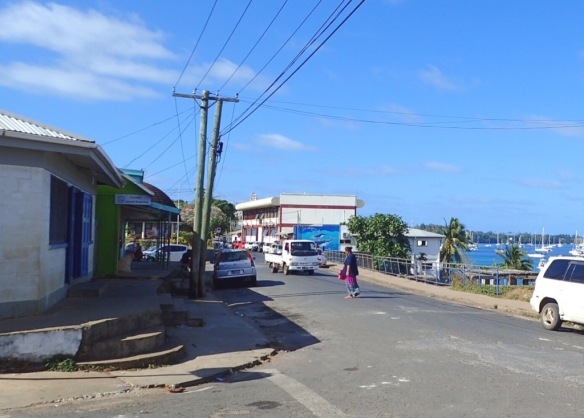 Main street in Neiafu, with the yachts moored in the bay

Having been weaned off Waitrose months ago the empty shelves of the small stores no longer horrify us, if we see something we may need we buy it there and then, menus are set once the shopping is completed and stand-in ingredients rule. Rick’s phone won’t connect to the local network and you have to pay for the local businesses to take away your rubbish. Strangly although as I said there are pigs in the streets, you see them in people’s garden and scavenging along the shore, pork is the ‘special’ on every restaurant menu but we can’t find any to buy. Smillarly there is the continuous chorus of cockerels wherever we go but no fresh chicken and rarely eggs. On the upside there are plenty of restaurants around and the fruit and veg market is quite well stocked, here in town we have expensive but reasonable internet and with few tourists the town focuses on being well set up to help the yachts and their crews.

We have plenty of time to enjoy Tonga so we have spent the past week slowly sorting ourselves out, Internet, laundry, charts etc… We have cleaned the boat and carried out routine maintenance and there has been a lot of socialising with the many friends, we have met along the way.

This weekend we are going to play the tourist game, joining a Tongan feast on the beach and at great expense, going on a whale watch boat with the hope of swimming with the hump back whales, that as we have already seen, frequent these waters at this time of year. They come to enjoy the warm calm sea to rear their young and are apparently unphased by people swimming close by. We can’t wait.

6 thoughts on “The King Comes to Town”