The travails of yesterday’s trip were soon forgotten. As we entered the anchorage off Ha’ano Island at the most northerly tip of the Ha’apai group, it’s crescent shape protecting us from the turbulent ocean beyond, we sighed with relief. As a large red sun set dramatically highlighting the perfect volcano shaped island of Kao, thoughts of our rough sail began to fade. This morning when whales joined us for breakfast we would happily have sailed it all again. 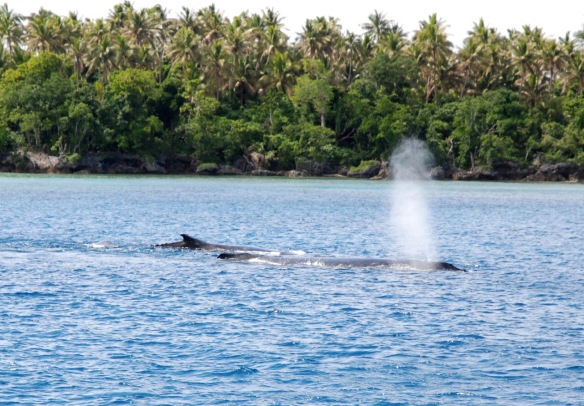 Our departure from Vava’u started on Friday. We very slowly, using as little petrol as possible, went into Neiafu to check out at customs and do a final shop. At the dock things were getting heated, four yachts including our friends on Nina were trying to fill up with their ordered dutyfree diesel before departing to Fiji. Unfortunately diesel was now also getting low and the tankers of fuel were being restricted. So started the long process of carrying it all by jerry can, from the petrol station up the road back to the dock. Finally full, Nina joined us in Port Maurelle for a last night in Vava’u. Port Maurelle is the anchorage of choice for departing yachts as there is clear deep water leading safely out of the island group. Most boats, on the normal route across the Pacific to New Zealand, were going to Fiji, but we wanted to explore the more remote islands of Ha’apai, we will return to Fiji next year. 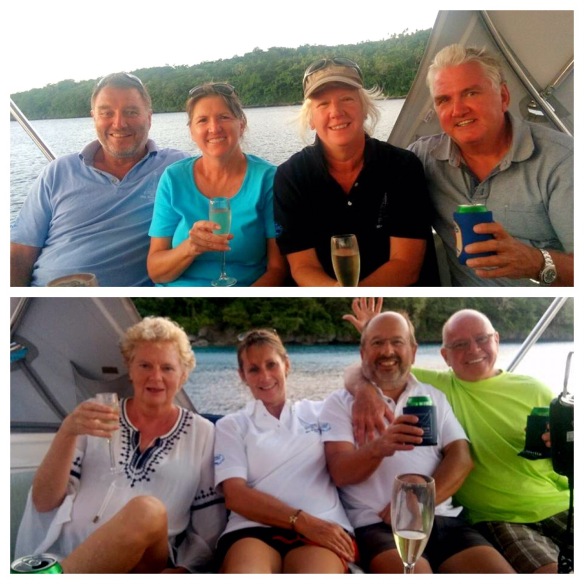 It was quite emotional watching the boats sail off Saturday morning especially Nina who we first met in Las Palmas at the beginning of the Atlantic crossing. It felt a bit like the last day of school with everyone having supported each other and experienced the Pacific together, now going there own way. Most of the friends we have met are now ahead of us, the majority of Australian boats, with further to go, left a few weeks ago, many more have departed to see a bit of Fiji before dropping down to New Zealand, hopefully we’ll bump into some of the boats again somewhere on our travels

We were expecting the sail 70 nm to Ha’apai to be challenging and we weren’t disappointed, after six weeks motoring around the protected waters of Vava’u and a year of down wind sailing, we would now be heading south and pretty much into the wind. We left at 4 am and before we had even cleared the islands things felt wrong, suddenly it dawned on me what was different, the sun was rising in the wrong place, the lightening of the horizon was happening off our beam, we have been sailing so long heading west it felt completely odd not to see it rise off our stern.

As we entered open waters the forecasted winds of 17kt were actually in the low thirties, we were well reefed and sailing fast but the sea was lumpy with a 6ft swell and choppy wind waves. We were unused to the movement and the heel of the boat, we found moving about difficult and despite the seasick pills after an hour or so I became sick. Rick not wanting to risk the same, made trips below only to grab water and biscuits. If this is typical of our sail down to New Zealand we could be in for a tiring and hungry week. Luckily my second line of defence against nausea, pills I tuck under my top lip where the drug is absorbed through my gum, did the trick and suddenly I began to feel better. But we were very pleased after nearly ten hours to see the low, palm clad islands appearing in the distance.

The shore line on the stretch of Ha’ano where we were anchored is dominated by a large top heavy rock commonly known as The Mushroom, behind it lie small beaches and craggy inlets. We sat eating our breakfast admiring the view, but the toast was forgotten when we spotted three whales, a 15m mum, a 10m male and a 3m calf, just 50m away. We jumped up to watch as they leisurely swam past and tucked themselves up behind the reef, stopped and seemingly went to sleep on the surface. A whale swim boat arrived and its lucky occupants had a marvellous snorkel with the whales hardly moving. About half an hour later they swam out from the reef and turned back towards us. We could hardly believe our eyes as they swam straight for us going under the boat and just a few inches from our stern. Up close they looked so big, their black shapes and white flippers clear as they passed beneath us, we were tempted to get in the water but with the whale watch boat so close we couldn’t really flaunt the law so obviously and we stayed on deck, cameras clicking, big smiles on our faces. 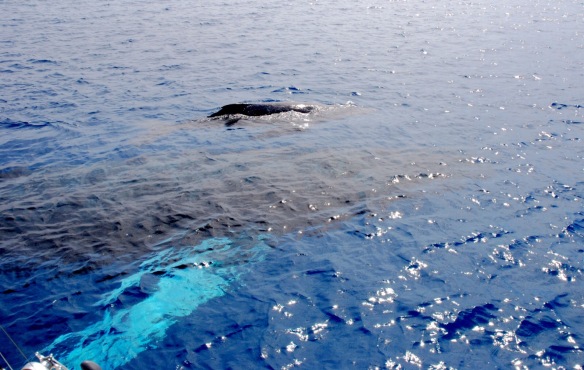 Mother and calf passing the stern

Once we had come back down to earth we prepared to lift the anchor and set off on the short trip down to Pangai the capital to find customs and check in. The route through the coral looked torturous but turned out to be straight forward and we had the anchor back down less than two hours later. The small town was sleepy and hot, the roads dusty, the buildings in patched up disrepair. There was a slow gentle feel to the place, everyone was friendly, the customs officers helpful and the local Mariners cafe, the only place to eat in town, had cold beer and good curry. What more could we want, oh yes, petrol, we found the fuel station and they had that as well. A fantastic day and worth every moment of yesterday’s discomfort.

4 thoughts on “Whales for Breakfast”