Yesterday, we spent an amazing couple of hours aboard the enormous US military support vessel USNS Pililaau. The night before we happened to be spending the evening with Russ and Gwen on board their yacht A-Train, when three of the slightly inebriated US crew whom Russ had befriended the night before, came by to invite them to have a look around. Rather surprised to be invited on a military vessel and with a three mile dingy ride across open choppy seas we nearly declined. We were so glad we decided to go. It was a completely, in the original sense of the word, awesome experience, the whole environment was totally alien to us in almost every way, but for the occasional feature that reminded us this was a ship that had to moor up, anchor, navigate and stay safely afloat just like us. 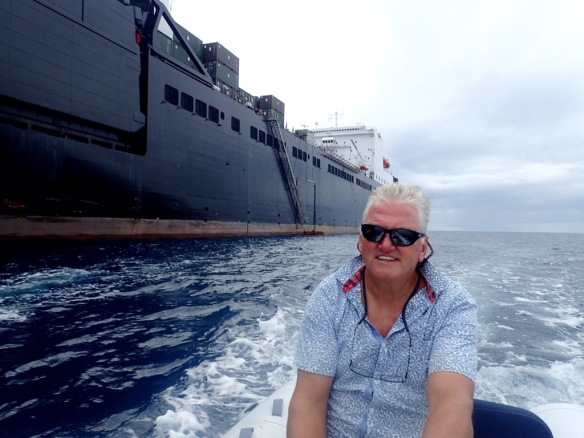 USNS Pililaau is 950ft long and 106ft wide, the deck stands about 100ft above the water. She is run by a civilian crew of thirty and Mike our friendly and enthusiastic host is the First Mate. Her task in life is to keep the US military flexible, by being one of 18 supply ships that are held in constant operational readiness around the world. Currently she has 40 Marines onboard that are involved in training exercises with local military units throughout the Pacific Islands.

We arrived at a landing pontoon on her port side, the dingies minute against her massive black hull and climbed a long steep ladder to a gate in the rail high above us. We stepped onto a clear area of her enormous deck, the helipads for two helicopters, the rest of the deck was jammed packed with containers and equipment required in the logistics of disembarking and loading all the military cargo she carries in her massive hold. 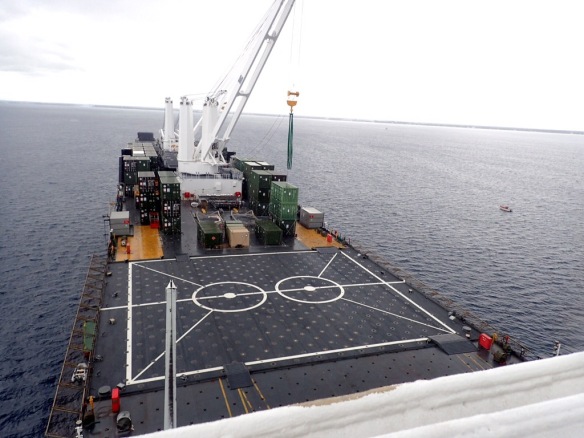 View from the bridge

We went through a small door in the superstructure, entering into a maze of corridors and steep steps. Here is housed the bridge, offices, hospital, cafeteria, and living quarters. Mike’s cabin was surprisingly large, the Marines however were crammed twelve to a small room containing just bunks and lockers. The bridge was huge, with large windows giving a clear view of the deck below and the surrounding area,  but was surprisingly un-hightech. She was controlled with just two throttles, two bow thrusters and a tiny wheel. What the rest of the switches, knobs and lights that filled the 50 ft control panel did was a mystery but the chart plotter was just a larger version of ours with a route plotted between waypoints exactly as we would do.

The five floors of cargo holds run the length and breadth of the ship. Mike took us through two of them and the scale of the operation became clear. Talk about boys toys, they were jam packed with military vericles, armour plated jeeps, bomb proof troop carriers, cranes, diggers and much more, at the far end were about fifty containers of just ammunition. The whole space felt like the set of a Hollywood movie. We resurfaced at the bows where two mighty anchors had been deployed on massive chains each individual link being about two foot long. The scale of everything on the ship was mind blowing, the industrial surroundings severe and the noise in some areas deafening, a stark but fascinating contrast to our other recent exploits. 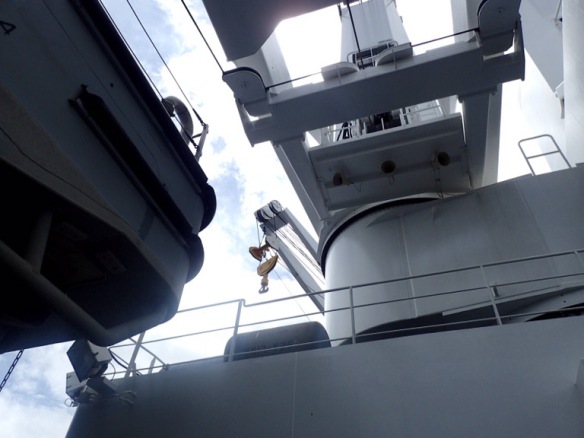 Our tour ended on a light note as Mike proudly led us the nearly quarter of a mile back to the stern to show us the ‘swimming pool’. Tucked in a corner was a cut down container Mike had purloined, lined with fibreglass and painted blue, it was complete with steps to a raised deck and homemade sun loungers.

Back on Raya we are sitting out a low pressure system, bringing rain and high winds to Tonga, busily preparing for the trip down to New Zealand. We have taken a few trips into town, much bigger and more crowded than Neiafu but equally lacking in any town planning. A few areas have been modernised and a lot of building is taking place, as far as we can see totally under the control of the Chinese. The supermarkets and shops were as empty and uninspiring as we have come to expect, the bank as chaotic but we did have an extremely good lunch at the Friends Cafe.

And exiting the dingy, tied up in the small boat harbour, we immediately realised we have another candidate to add to our growing list of dodgy docks.