Motoring up a narrow river was certainly novel for us after over a year of the open sea. We had one eye on the fantastic landscape that slipped closely by either side of us, while the other was firmly and anxiously on the depth gauge.

Motoring down the Mahurangi River

Wednesday morning we said a final farewell to Gulf Harbour. It hadn’t been our favourite spot, we seemed to have been plagued by cold SW winds for most of our stay that had whistled into the cockpit and kept us often huddled below and our berths location would have been a complete disaster without the use of Ricks sister’s car. But having been there since the middle of November it had come to feel like home, our boating neighbours have been great as always, full of friendly advice and generous with offers of help, it has been useful to be relatively close to a big city and all that brings with it and of course was a safe and secure spot to leave Raya while we were back in the UK.

And it did feel great to be out at sea again especially as the day was bright, warm and sunny. There was little wind and what there was, was not in a great direction but we were unworried, we had decided to use the two hour trip as a sea trial for the newly refurbished engine. It certainly sounded great, smooth and quiet – hooray.

Robertson’s yard, where Raya will be for the next few weeks, have a mooring bouy at the entrance to the Mahurangi river, we picked it up and relaxed. Conrad would be joining us tomorrow to pilot us the final few miles up the river on the midday tide. We were surrounded by rolling hills, holiday homes were scattered through the woodland, each with fantastic views, many with inviting seating areas and steep steps leading down to rickety jetties. Flocks of White Fronted Terns fed on the obviously plentiful fish and Australasian Gannets, looking rather like large, white, ungainly ducks, drifted by contentedly on the tide.

For us this same tide was at first rather disconcerting. When at anchor or on a mooring buoy in the absence of any significant current, the normal situation for us in a bay or nontidal harbour, the boat swings to windward, so we are use to the wind coming over the bows. However being in a river estuary with significant tides the currents are strong, so along with all the other boats we swung with the cycles of the tides, it felt odd to have the wind often hitting us on the beam.

At 11.30 the next day Conrad was dropped at the boat and took the helm. We motored up the rapidly narrowing river surrounded by reedbeds and now hidden by the high water, lethal mud banks. At its shallowest the depth gauge read only 0.3m under our keel. We held our breath anxiously but Conrad confidently pushed on winding down the narrow central channel. With a sigh of relief we arrived at the boatyard and Raya was safely lifted from the water and chocked securely ready to be cleaned, antifouled and polished.

Raya being hauled out at Robertson’s Boatyard

Rick spent the next morning discussing a myriad of other jobs to be done, amongst other things hopefully  we will return to a working fridge and freezer, a regalvanised anchor and chain, replaced seals on a leaky electric winch motor and staysail furler, a couple of new stopcocks and a retuned rig.

Shuddering at the potential cost and a little worried about leaving while all this is going on, we packed our bags and waved goodbye. We have a busy three weeks ahead, first stop Rotorua. 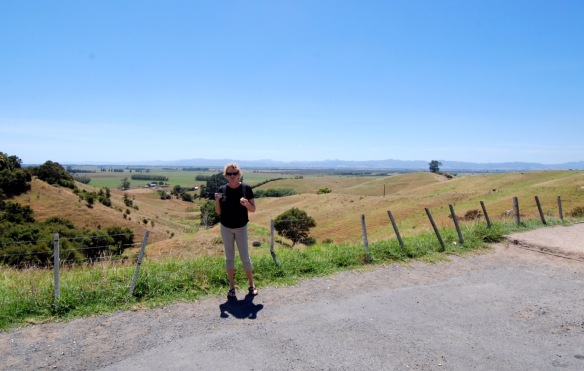 Enroute to Rotorua, a cup of tea with a view.

5 thoughts on “Up the River”