We are on our way back to the North Island, having had a fantastic time in the South but looking forward to getting back to Raya. Sitting on the Interislander Ferry I finally have time to catch up to date with the blog.

Wednesday as we drove through the  Hass Pass towards the West Coast the clouds thickened, the rain started and the biting sand flies came out. We pushed on, this was one of the longest drives of the trip and the conditions discouraged us from stopping more than necessary, even if the rain eased up as soon as we opened the door the pesky biting flies were on us in seconds.﻿

The West Coast﻿ is a thin strip of land that runs nearly the whole length of the Island sandwiched between the Tasman Sea on one side and the Southern Alps on the other. Except for the odd glance we could see neither, the first part of the road was cosseted by high banks of ferns and moss covered rocks. If a couple of pixies had appeared from the undergrowth they would have seemed completely at home. Instead of pixies we passed a young Chinese couple, their car very much stuck in the ditch. We had had no phone signal for hours even in the small town of Hass where we had stopped briefly for lunch, we had past very few cars, so we put on our hero hats turned around and drove them the half hour back to town so they could organise a tow.

Finally we reached our lodge in Okarito, a wetland area famous for its bird life. Unfortunately, our rescue mission had meant we had missed the low tide that reveals the mud flats that attract the birds but the rain had stopped and I enjoyed a walk along the beach that was made up of the most wonderful pebbles. With the pale grey of the beach, the darker grey of the sea and the bleached white of the strewn driftwood, all bathed in the low hazy light of the early evening it was as if all the colour had been washed out of the world. The scene was surprisingly restful, if slightly stark.

The beach at Okarito

It has to be said that the lodge here was also rather stark. Little more than a metal clad wooden shack, it was nicely decorated in places but it was as if someone had stopped the process a third of the way through. The advertised ” wake up to wetland and forest views ” was only true if you happened to wake up stood peering out of the small corner window at the other end of the room. Luckily the bed was comfortable, the shower large and all was clean and tidy.

The next morning we continued our drive north on State Highway 6, stopping for a coffee with some old friends from Cranbrook who we had discovered would, bizarrely, be driving the same road, at the same time but south, as we have experienced before this is a small world. As the day wore on, the sun fought through the haze and the road became more exciting, climbing around headlines, dropping into valleys and often clinging to the very edge of the coast. 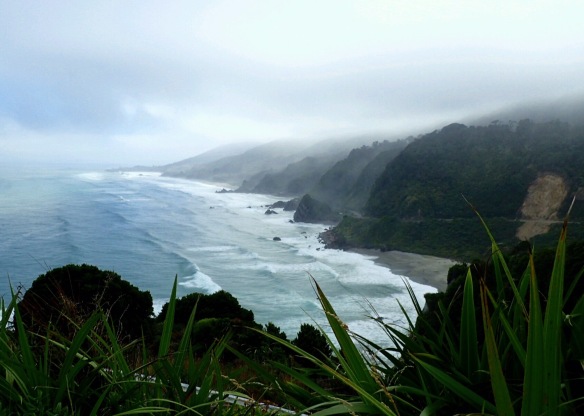 We stopped to admire the Pancake rocks, a headland composed of layered sandstone and mudstone. The softer mudstone has corroded away more quickly than the sandstone leaving rocky stacks that look a bit like piles of pancakes

Finealy Thursday afternoon we reached Blenheim our final stop on the South Island. This is Marlborough wine country and you know you have arrived because suddenly every acre of suitable land is planted with vines, rows and rows and rows of them.

Miles of vines in the Marlborough region.

But before exploring the vineyards we headed out to the aviation museum. A large collection of restored and replica first and second world war planes. Another superb New Zealand museum, each aircraft was shown along side personal stories from the airmen who had flown them and many of them had been displayed like film sets with figures and props made by the Weta Cave Studios. 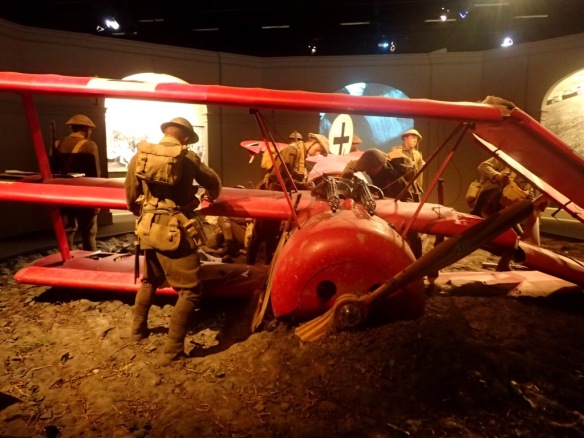 A portrayal of the capture of the WW1 flying ace The Red Baron, the plane is an exact replica.

Culture requirements ticked we head for the wine trail, each vineyard has a cellar door open for tasting and it is easy to drop into one after another, a bit like a posh pub crawl. Between the familiar names of Cloudy Bay and Stoneliegh are smaller boutique producers and it was these we selected to visit. We had a great few hours trying out everything from the  Sauvignon Blanc this area is famous for, through a few reds, half a dozen sparkling wines to my current favourite crisp dry Riesling. We were very restrained the car boarded the ferry only a couple of boxes of wine heavier than our crossing a few weeks ago.