It’s funny how only bad weather forecasts turn out to be correct, it is now Sunday and we have had nearly five days of high winds and continuous torrential rain, the complex low pressure, dishing up today, as a final fling, a lively northwesterly storm.

We had moved around to Nagal Bay on Saturday, ostensively because it was sheltered to the north and west but really because we just wanted a change of scene. We had sat in Port Fitzroy confined below playing scrabble and rummikub, reading, watching movies and obsessively checking on the weather. On the couple of occasions the rain stopped for a couple of hours we dingyed in and walked up to the shop, one evening we escaped and went to eat at the restaurant. The rough weather had however stopped the ferries, so supplies dwindled quickly, a chocolate ration has had to be imposed onboard. 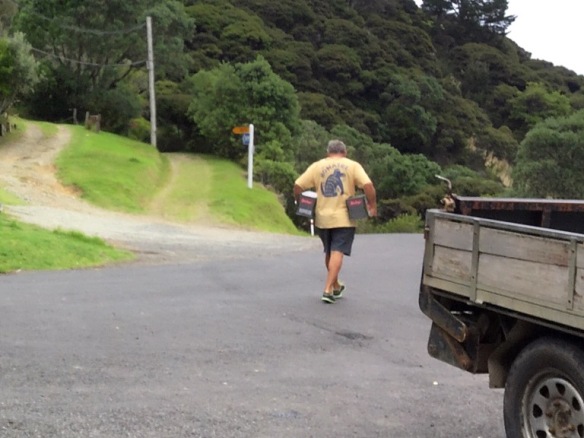 Stocking up on essential supplies

Friday after a morning of high winds, suddenly, all was calm, the quiet was wonderful after the noise of rattling halyards, wind whistling through the rigging and waves hitting the stern. The stillness after the violence of the last two days felt precious and sitting in the fresh air, on deck, was a delight. The rest of the crew were snoozing having retired to their bunks in disgust a few hours ago, I enjoyed the peace knowing the rain would be back very soon. We are using the NZ Met Office, live time, rain radar images, good as you watch the rain move away but depressing as you watch it build back up yet again.

The whole boat feels damp, we are working hard to keep everything dry because once something is wet that’s the way it stays. As Rick discovered when he dived in fully clothed to rescue the dingy, which a crew member, who shall remain nameless, had inadvertently left unsecured. His washed sweatshirt hangs festering and dank two days later.

It really felt like we’d had enough when,﻿ checking first thing, we saw the Gale warning for this morning had been upgraded to a Storm warning. We let out another 10m of anchor chain, tied down the Bimini and everything else that was lose on deck and held on tight. Our wind gauge peeked at 48kts even in the protection of the northerly hills. Water was whisked up from the surface of the sea, waves crashed on the leaward side of the bay and the rain fell horizontally. As we twisted and rolled, we watched our smaller nieghbour being battered and were glad of our full 33 tons. 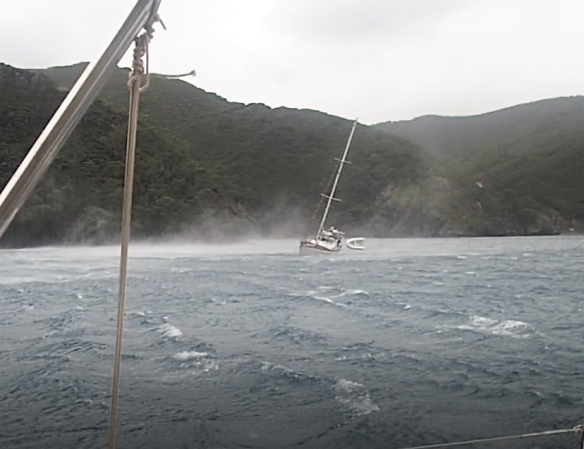 Forty knot winds toss our neighbours dingy in the air

Gradually things have calmed down, ﻿the sun even made an appearance this evening. The forecast is for a much better week ahead – a good forecast, can we trust it?