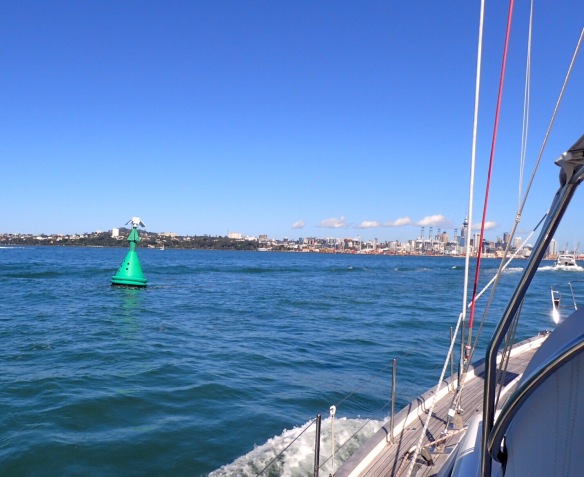 As we sat waiting for the brilliant Adele to come on stage, I realised how quickly our time in New Zealand has passed. I bought the tickets for Adele Live back in November just after we had arrived. Then this concert seemed such a long time away and was a marker for the final part of our New Zealand stay. The plan now being to start slowly working our way north, back to Opua, where we will look for a weather window early May to sail up to Fiji.

Adele was of course worth waiting for, belting out her familiar songs, joking with the crowd and making the most of her extensive set, she was the true showman. Add in the buzz from the near 50,000 people seated in the Mt Smart Stadium, the chance for a good sing along and the mostly efficient organisation – we had a great evening.

It has been a very busy week, Sunday morning we sailed into the centre of Auckland. It was maybe not the best of days to have chosen, Auckland has the nick name ‘City of Sails’ due to the large number of marinas, one in three Aucklanders own a boat, on this pleasant Sunday morning I think most of the them were out enjoying the sunny weather. Navigation was hazardous through the crowded channel and the water choppy with wakes. We eventually worked our way through all the craft, big and small, everything from a car ferry to a guy fishing from his kayak, and tied up at the Viaduct Marina. We are stern to the dock underneath the main walkway through this busy city waterfront area. It’s a bit like being the exhibit at the zoo as hundreds of people wander past looking at all the boats. Although the smallest yacht in this part of the marina, our Southampton registration is attracting attention from the many Brits who are visiting or live here. 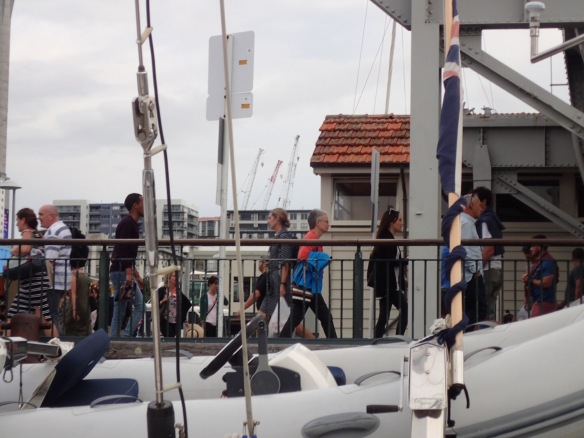 Rush hour past the boat

Fun as it is to be in the middle of things, restaurants and shops a mere stroll away, the true attraction is the large chandleries and miriad of  yacht services at our finger tips. For the first time in over a year we can get things done quickly and easily, Rick has jumped at the oppotunity. Amongst other things the generator has been serviced including refurbing the injectors and hopefully sorting out the last of the problems caused by the dirty Tongan fuel. The dingy engine has also been serviced. Rick has replaced the seized dingy gear cable and the broken main outhaul and furling buttons in the cockpit.  The boxes of spares have been sorted, topped up and the inventory updated. We have cleaned inside and out, everything was ready, Raya back in tiptop condition for another season in the Pacific Islands.

Well, until last night that is, on our return to the boat, to our dismay, we noticed the fridge had stopped. Days more at the zoo were imagined, disapointed guests, friends Taryn and Greg arrive this evening, having to waste precious days of their holiday waiting around, doom and gloom accompanied us to bed. But no, this is the centre of Auckland we had an engineer onboard by 2pm, a small leak and blocked filter discovered by 2.30 and a working fridge by four. Plan A back on track.