It has been a rather tense twenty four hours, the whole of NZ battening down the hatches in anticipation of yet another storm. Tropical Cyclone Cook took a dramatic south turn from the tropics and is currently skirting down the east coast of the North Island. We are tucked away in Orakawa Bay in the Bay of Islands and thankfully so far the storm force winds have stayed out at sea, here it is suspiciously calm our wind gauge mostly hovering between 0-7kts. We have had plenty of rain, infact almost continuos heavy rain, I’m sure once we have enough i﻿nternet to see the news some poor areas will have had a much worse time than us and flooding and land slips will be plaguing the mainland yet again. It is slightly ironic that having sailed south to New Zealand to escape the tropical storm season, Tonga and Fiji are coming out of the summer relatively unscathed while we have spent the last six weeks hiding from one storm after another.

Tuesday lunchtime we waved a fond farewell to Taryn and Greg at the fuel dock in Opua. Their last few days were rather drizzly and grey but we did manage a few final adventures. The most pleasant of which was spent in what I think is my favourite of the bay’s we have visited here – Oke Bay. We had spent a lovely couple of days there in November and it didn’t disappoint this time either. Dramatic hills almost completely protect it from most directions of wind, it is open to northerly swells but last Friday was calm there was just a gentle roll creating a relaxing rock. The beach at the head of the bay is sandy and dingy friendly, as we stepped ashore we were greeted on the beach by an affectionate dog who followed us around demanding strokes and tickles. We were not sure where he came from but he obviously couldn’t read, on the track leading down to the beach it clearly stated ‘ no fires, tents or dogs allowed’.  Walking up the track we were surprised to discover how narrow the peninsular was, just a hundred metres away, over the top of the hill, was the rest of the Bay of Islands. Taryn and Greg climbed higher into the hills and were rewarded with fantastic views. 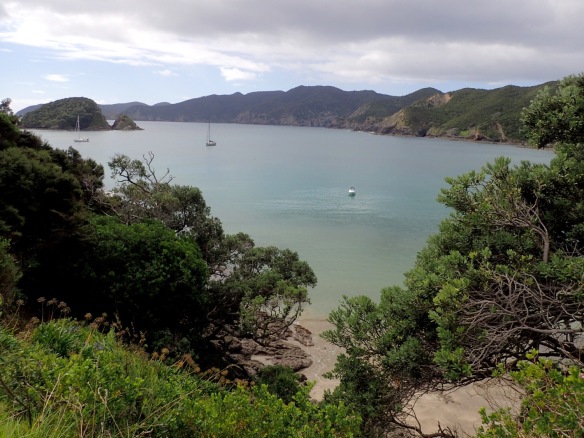 On Saturday we set off for the Cavalli islands and Whangaroa Harbour, the wind was light and directly behind us, so disappointingly, yet again, it was on with motor. It was a scenic trip however, the sun put in a hazy appearance, the islands are surrounded by striking craggy rocks and the cliffs of the mainland are topped with green rolling hills. We spotted, on top of one of the cliffs a distinctive sculpture, after a bit of research we discovered it was the memorial to the Rainbow Warrier. This Greenpeace boat was sunk by the French Secret Service in Auckland Harbour in 1985 while it prepared to set sail in protest at the French testing of Nuclear weapons on remote Pacific Atolls. It was salvaged, towed and resunk in 26m of water off Motutapere Island, to create a new home to colonies of coral and shoals of fish and an exciting dive site.

We passed through the narrow entrance to Whangaroa Harbour to find yet more incredible New Zealand scenery, deep inlets encased in dramatic rocky formations. It was extremely quiet, there was hardly any movement of boats and the small quaint town was almost deserted. We did find some life at the friendly Sports Fishing Bar but there was a definite feeling of being in the back of beyond.

Most evenings since Taryn and Greg have joined us, with the weather not clement enough to be on deck, we have settled down at the salon table and played bridge. Despite all being very much beginners we’ve had great fun, our brains struggling to keep up with rules that Rick delights in reading out to us from the Learn Bridge book, just when we think we are getting the hang of things. I can see the mantra of. “come over for a sundowner” spoken by all cruisers when anchored in a bay together, will have to be increased to “oh and, do you play bridge?”.

The sail back to the Bay of Islands was messy with the swell ahead of the cyclone effecting the coast. Yet again, I was caught out not keeping my level of sea sickness medication high enough and spent the last hour of the journey feeling terrible. However it was great to give Taryn and Greg a final trip with the sails up. We even managed to deliver a goodbye sighting of dolphins, a spectacular display, the dolphins jumping high into the air.

It felt odd to have Raya back to ourselves, we anchored off Russell and stocked up with food. We both felt tired, it’s been a busy few months, so treated ourselves to an afternoon of TV. We regretted not sailing on, we were woken the next morning to the boat rocking violently in the wake of the early morning ferries from Paihia and the start of the rain. We avoid sailing in the rain if we can but we needed to get ourselves somewhere well protected from the forecast high winds so we dug out our wet weather gear and in deteriating visibility motored around the headland to Orakawa Bay where we have sat more or less windless but wet for the past day and a half.

Checking the forecast it seems we have escaped the worst of the cyclone which is now just south of us and I can even spot a bit of blue sky!

3 thoughts on “Cyclone Cook Passes Us By”