It was a relief to finally find calm waters as we entered the area known as the Blue Lagoon. We had had two rolly nights and we were all ready to be rid of the swell and to enjoy some flat seas. It was a shame we had had to move on so quickly because the previous two anchorages had both been very picturesque and inviting.

Thursday morning we left Vuda, via a top up at the fuel dock and headed out towards the Yasawa islands, a string of volcanic islands that run down the western side of Fiji. It was a lovely sunny day, not quite enough wind to sail but onboard with us, were Matt and our friends freshly arrived from the UK, Tony and Gilly. Five eager people enjoying being out at sea and looking forward to a couple of weeks cruising. A great morning was topped off when the boys landed a large Wahoo just as we rounded the reefs off the Island of Navandra. 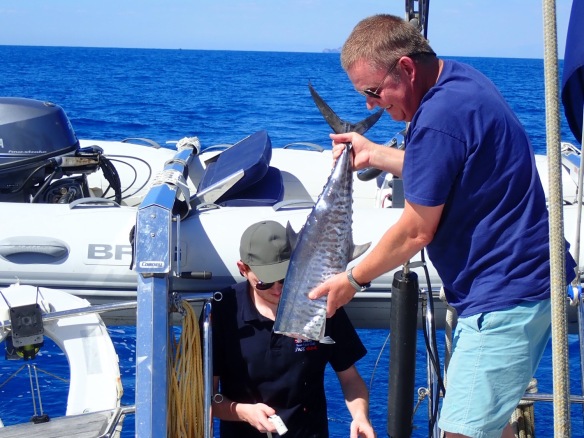 Navandra is two small islands at the south of the Yasawa chain, they are uninhabited and have white sand beaches surrounding a rocky interior, true 'out of the guide book', South Pacific scenery. The anchorage was a bit uncomfortable but it was too beautiful to leave. We settled Raya at anchor, made a salad and were eating the Wahoo about as fresh it comes, just an hour after it was caught.

It was great to be back swimming from the boat and the reef off the beach gave us some good snorkelling. That evening we joined cruisers from the half dozen boats in the bay for drinks around a beach bonfire. We discovered this was a very special island, the fading light cast a pale grey wash over everything, slowly it turned to pink in the setting sun, our surroundings made the rocky water worth while. 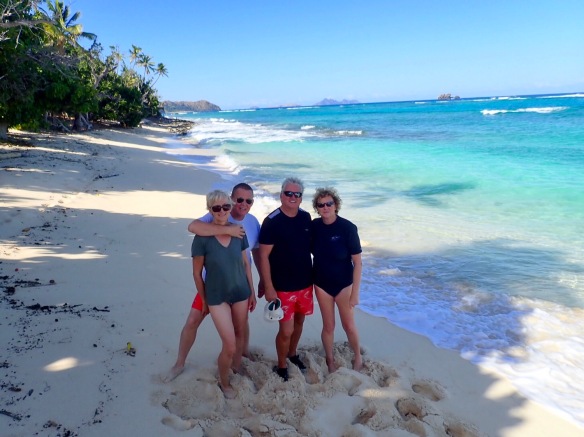 The morning brought more swell and the surf breaking onto the beach gave for an interesting dingy landing, but with five of us to control it and drag it clear up the beach we got ashore. The sand was powder soft and the huge boulders in the centre of the island gave the place a rugged feel. At one end a big jagged lump of rock was joined to the main island by a spit of sand. We paddled, shell spotting, watching hermit crabs and tiny white crabs that tumbled along the sand in the breeze.

Once back on the boat we reluctantly upped anchor in search of calmer waters. The plan was to gradually make our way north through the chain and the nearest likeliest looking bay was on the north end of the island of Waya. From the chart Nalauwaki Bay looked well protected from the forecast wind and swell direction. On arrival we found the dramatic hills, reminiscent of those in the Marquesas Islands, delivered visually and did a great job blocking the wind, however, the swell somehow was creeping around the headland, deflecting on the opposite shore and making us roll more than ever. Two late in the day to move on we made a bid, in the dingy, for a few hours ashore. There was a village, a nice beach and paths leading up into the hills, but despite the enthusiastic arm directions from a villager on the beach, the crunch of the bottom of the dingy on the coral dissuaded us from venturing in.

Early the next morning we left and postponing stops along the way we headed for what has to be the most protected bay in the Yasawas, we are anchored off Nanuya-Sewa and very lovely and flat it is too.

1 thought on “Rock and Roll”