We stayed in Manta Ray Bay one more night, not only to swim again with these wonderful creatures but also in the morning to fulfil Matts ambition to dive with sharks. Sharks and many other large fish often gather in areas of the ocean where, in a form of symbiosis, much smaller fish swim around them removing parasites and algae. These smaller fish, often small varieties of wrasse will even enter and clean inside the sharks gills and mouths. One such cleaning station exists on the reefs that run in the passsage just south of the Manta Ray Resort and is almost guaranteed to have sharks present.

Matt and I signed up for two dives, it was a bit early on the tide for the sharks so they took us first for a cave dive. Personally I find caves a little barren, much preferring the coral gardens and walls with all their colour and life, but it was fun twisting our way through the narrow passages, each turn revealing a change in the light, dark corners or bright shafts of sunshine. Unfortunately near the end of the dive the route took us sharply down and through an archway, Matts ear didn’t equalise adequately and he was left in a lot of pain. Between dives I called Rick and he bought us over some chewing gum, Matt desperate to do the shark dive chewed energetically to loosen the ear area as much as possible. Still in pain he managed to clear his ears enough to get down to the cleaning station and was rewarded with close encounters with white and black tip sharks and a large grey shark that cruised back and forth with his mouth wide open allowing the tiny yellow wrasse to clean his teeth.

Saturday dawned with hardly a breadth of wind, we were headed to Musket Cove where Tony and Gilly were leaving us for a couple of days of luxury at the resort there. It had been a shame that the wind had never been right for us and they never got a proper sail. Especially as when we started to approach our destination and its surrounding reefs, where it’s too tricky to sail, it suddenly picked up. By the time we were anchoring in the cove it was blowing 20kts and white horses topped the choppy waves. Not the best conditions for dinging people and their suitcases into shore but all were landed safely, if a little damp. Later that evening we joined them in the resort restaurant for a final supper and discussed what a good couple of weeks it had been. They had been perfect guests. 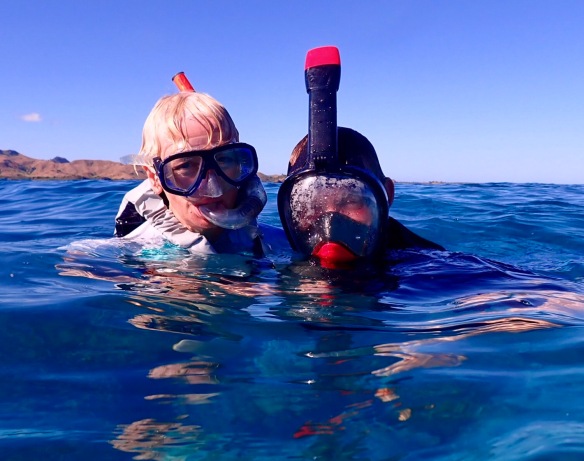 Tony and Gilly enjoying the snorkelling

The next evening it was time for a last meal with Matt, now back in Vuda we had an enjoyable time listening to another really good band playing at the Boatshed. Still with earache we waved him off armed with Ibuprofen for the plane. We will miss him, especially his enjoyment and knowledge of the fish and coral and his youthful energy helping around the boat and dingy.

Great having Matt onboard

Our second reason for returning to Vuda was to overhaul our high pressure pump for the watermaker. Just as we were leaving a few weeks ago Rick discovered an expert in Laukota, a town just fifteen minutes up the road, the pump was beginning to become a bit unreliable, a service was overdue. With a bit of nudging, they finished the job in two days and Wednesday afternoon Rick with our ever helpful taxi driver Abdul drove up to pick it up. Then a complication, there always seems to be a complication, the company would only except cash. Since our return to the UK we seem to have triggered multiple security alerts and our cards are being continually blocked. After no luck at the ATM Rick tried the bank but they had no facilities for international exchange. While, frustrated, Rick called me to see how much cash I had, Abdul appeared out of his bank with F$2000 to lend us, what amazing generosity. While Rick recovered the pump, I called the banks in the UK and armed with a stash of all our cards I managed between them to make the marina ATM give me just enough money to pay him back.

We are now back at Musket Cove to catch up with friends before heading back up to the Yasawas and a bit of a break before our next guests arrive.

2 thoughts on “Fairwells and Favours”