We have spent a pleasant four days in Musket Cove sat in the resort’s small marina. With three restaurants, a large pool, beaches to explore and a bustling activities centre it feels like being on holiday. Some of the time at least. Unfortunately we have had a lot of cloud, some rain and a cool wind that has, due to the direction we are tied to the pontoon, been screaming into the cockpit, at times, keeping us hiding below. Jumpers have been worn! 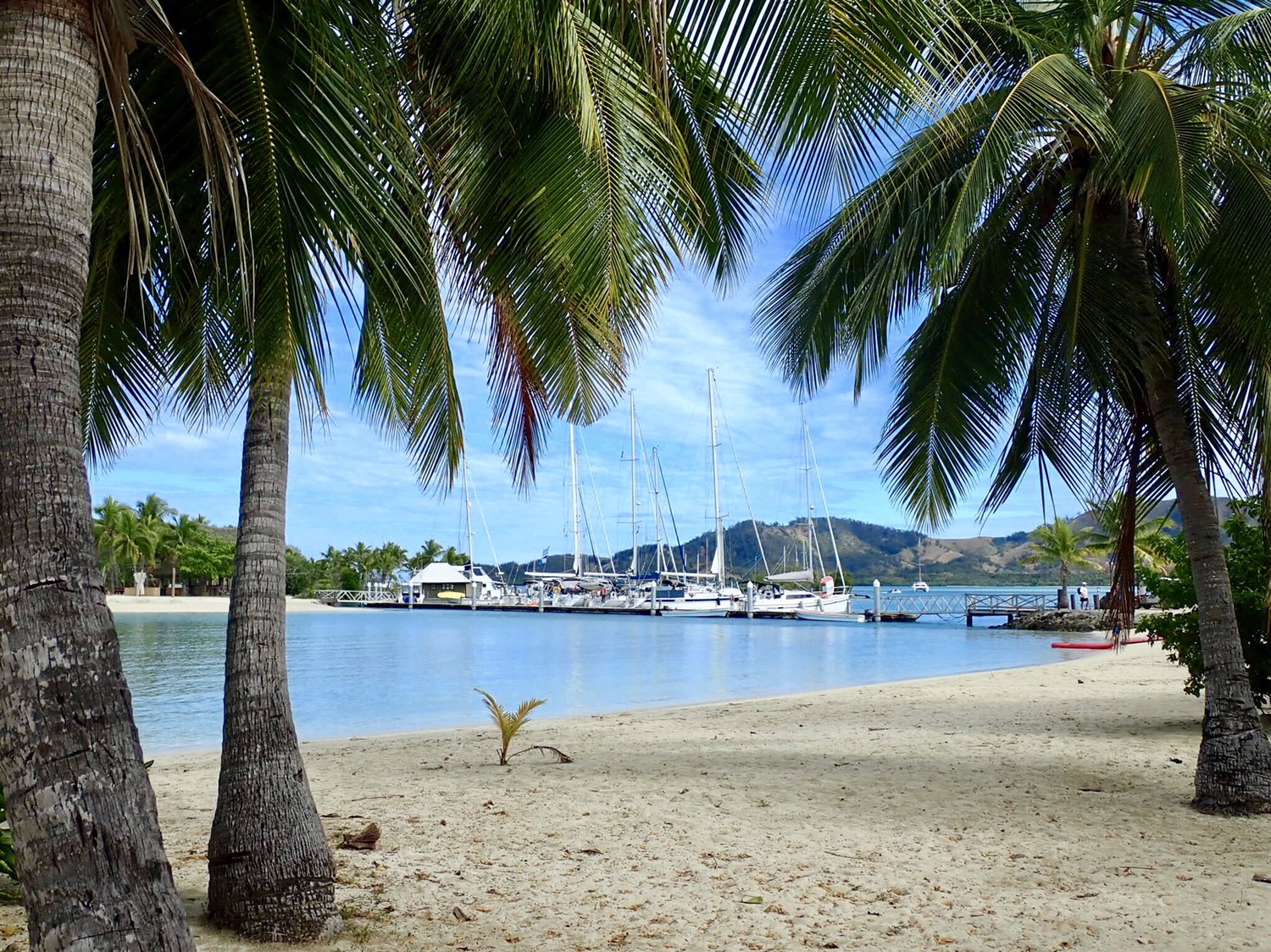 Pretty place to tie up to the dock – Musket Cove Marina

The weather started to change last Sunday. After a nice day spent Saturday off Octopus resort, meeting up with our friends from Crazy Daisy, Sunday morning we headed South. There was zero wind, the calm flat sea was dark and oily and with clouds building, the atmosphere was heavy and oppressive. Rick slightly under the weather with a tummy bug, snoozed in the cockpit, everything was so still and the ocean so empty it felt like I was the only living thing around. Then has happens in the tropics, the rain starts and the world comes back life. So it was, a very bedraggled Raya and crew tied up at the dock.

Monday dawned dry but windy. Musket Cove is connected to the mainland by the Malolo Cat, an hour ferry journey across to Denarau Port. While I stayed aboard cleaning and preparing for the arrival of our next guests, Charlie and George, Rick took the ferry across to complete some chores and have a look around the chandlers. With a shuttle from the airport to the ferry it was also an easy way for the boys to reach us the next day.

Moored one boat down from us on the dock were Clare and Darren from Knockando and frequent visitors to Musket, over a drink at the bar they filled us in on all the local information, including the best snorkel spots, a run down on the restaurants and how to buy cheaper beer.

This turned out to be invaluable, Charlie and George arrived exhausted from their exploits in Indonesia and Sydney but still able to sink a can or two of Fiji Gold and keen to get into the water. A mile off the marina is a long sandbar, as the sunshine appeared from the morning cloud, the white sand glowed in a turquoise sea. We took the dingy, sluggish under the load of four people, out through the shallow marina channel, through the anchored cruising yachts and past four or five super yachts. One giant, Dragonfly, is a sleek 240ft long by only 32ft wide motor yacht and Google tells me is the fastest superyacht around and Google should know, it is owned by one of their co-founders. 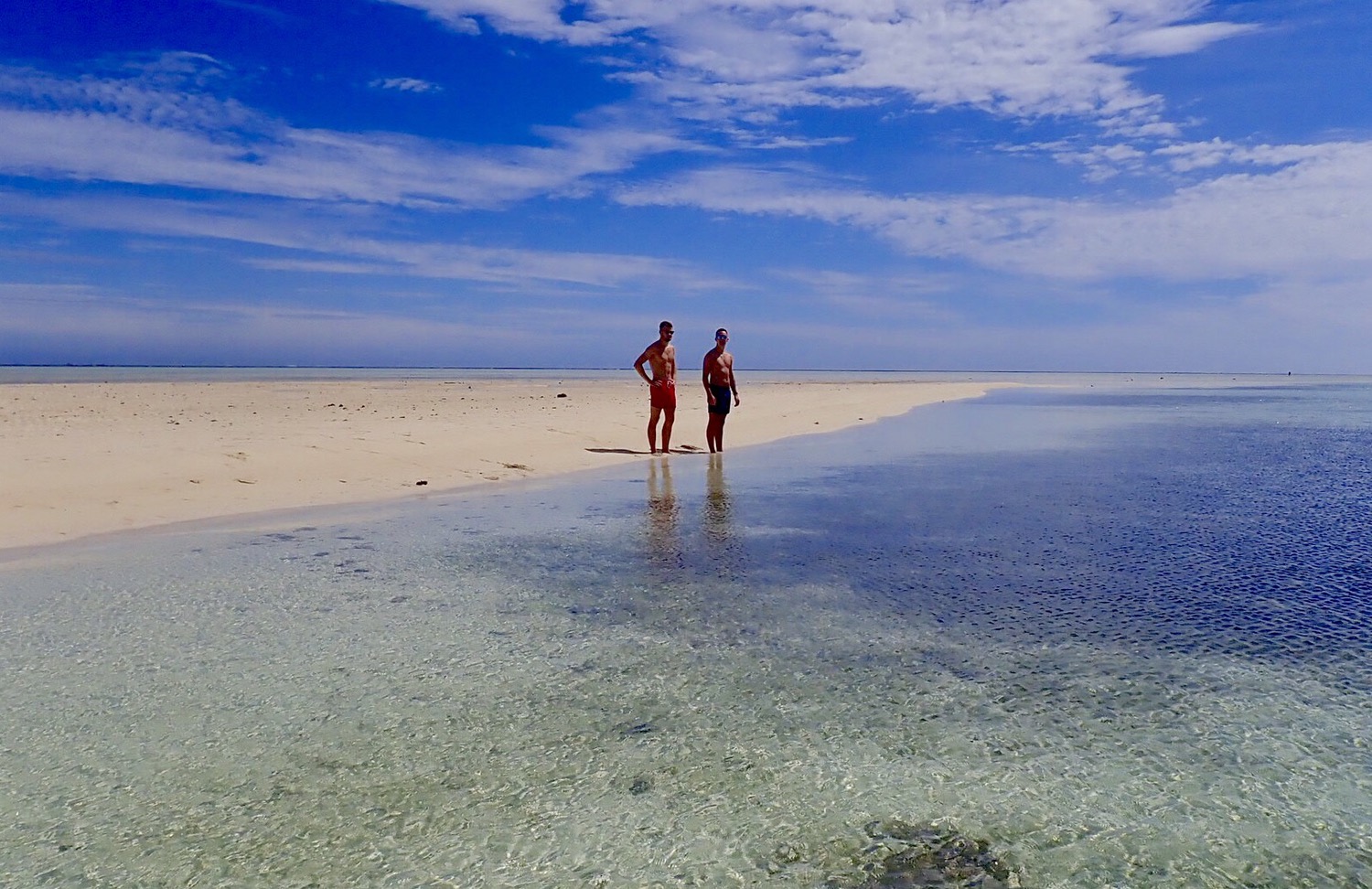 Charlie and George on the sandbank, Musket Cove

The snorkelling off the bank was murky but the lack of visibility was compensated for by the thousands of fish. Along side the normal array of reef dwellers we spotted a group of 2ft long trumpet fish and numerous trigger fish, including a group of my favourites, Picasso triggers. 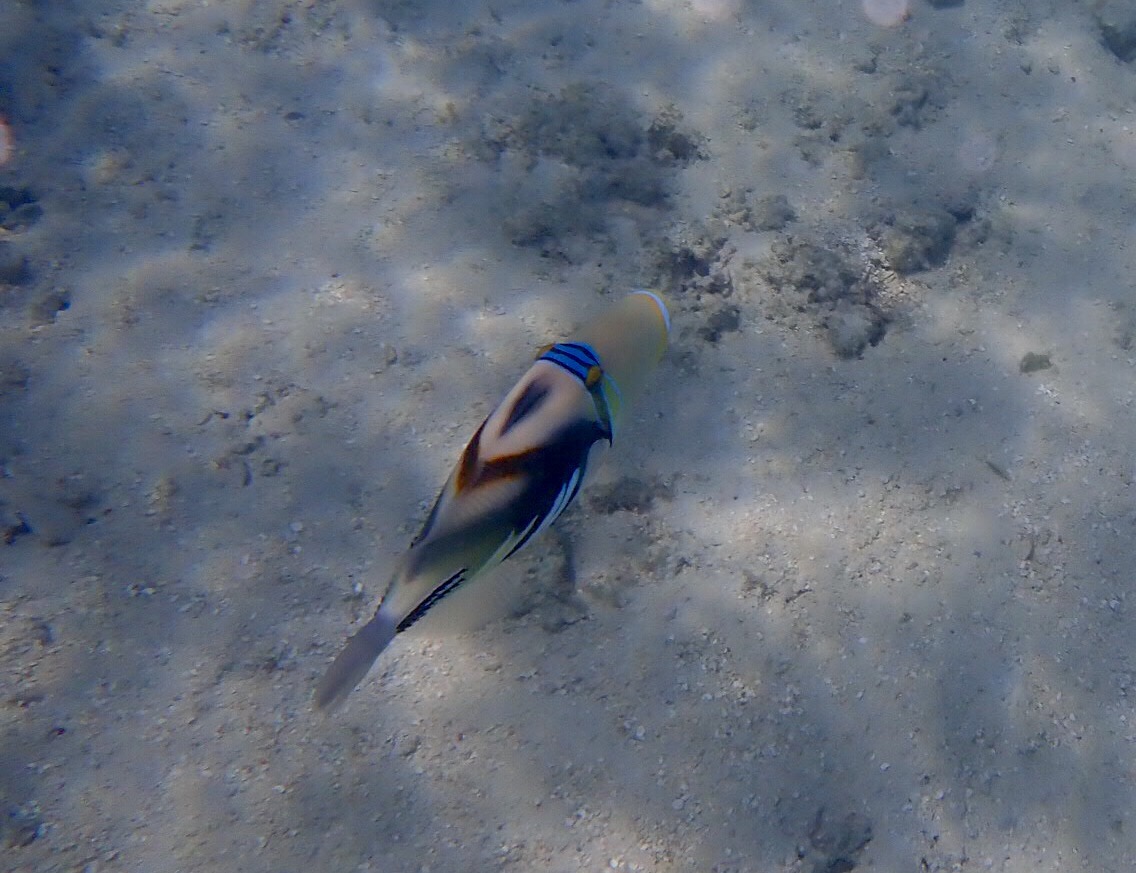 We availed ourselves of the resort facilities for another couple of days. The boys went diving, we all enjoyed the self cook BBQ at Pirates bar, we swam in the pool and stocked up on the slightly pricey supplies at the shop. Then having made Raya shipshape yesterday evening, we plan to leave on the high tide at 9am this morning and head for a night at Navandra.

A last thought, I spotted this article on the BBC news website and it made me smile. The problem of having to ration your energy requirements to make that essential cup of tea was big news in the real world, for us in Raya World, this is an everyday feature, just replace electric car with water maker/water heater/toaster.