We are cocooned far up the aptly named Smiths Creek. It is very, very still, the mirror like water reflecting the trees and slabs of rock that cover the almost vertical sides of this waterway. The sun, yet to be high enough to appear above the steep hills, highlights their tops in a magical yellow glow, bird song and the incessant high pitched drone of the cicadas fills the air. I love this early morning tranquility, despite and possibly because of its fleeting nature.

A large passenger jet crosses the sky, it’s noisy engines breaking the spell and reminding me that regardless of the appearance of being deep inside the bush, we are in fact only twenty or so miles from one of the Worlds major cities and just around the corner from busy Pittwater.

We left the RMYC marina Wednesday morning and headed out of Pittwater back into Broken Bay and then down into Cowan Creek, a seven mile narrow tidal creek with a dozen or so bays and inlets joining it. Our first stop was Jerusalem Bay, where near it’s deserted head we dropped the anchor and took in the scenery. The water was deep and dark, flourishing but spindly trees appeared to grow straight from bare stone, dramatic striated outcrops of limestone rock and vertical cliff faces line the shore. 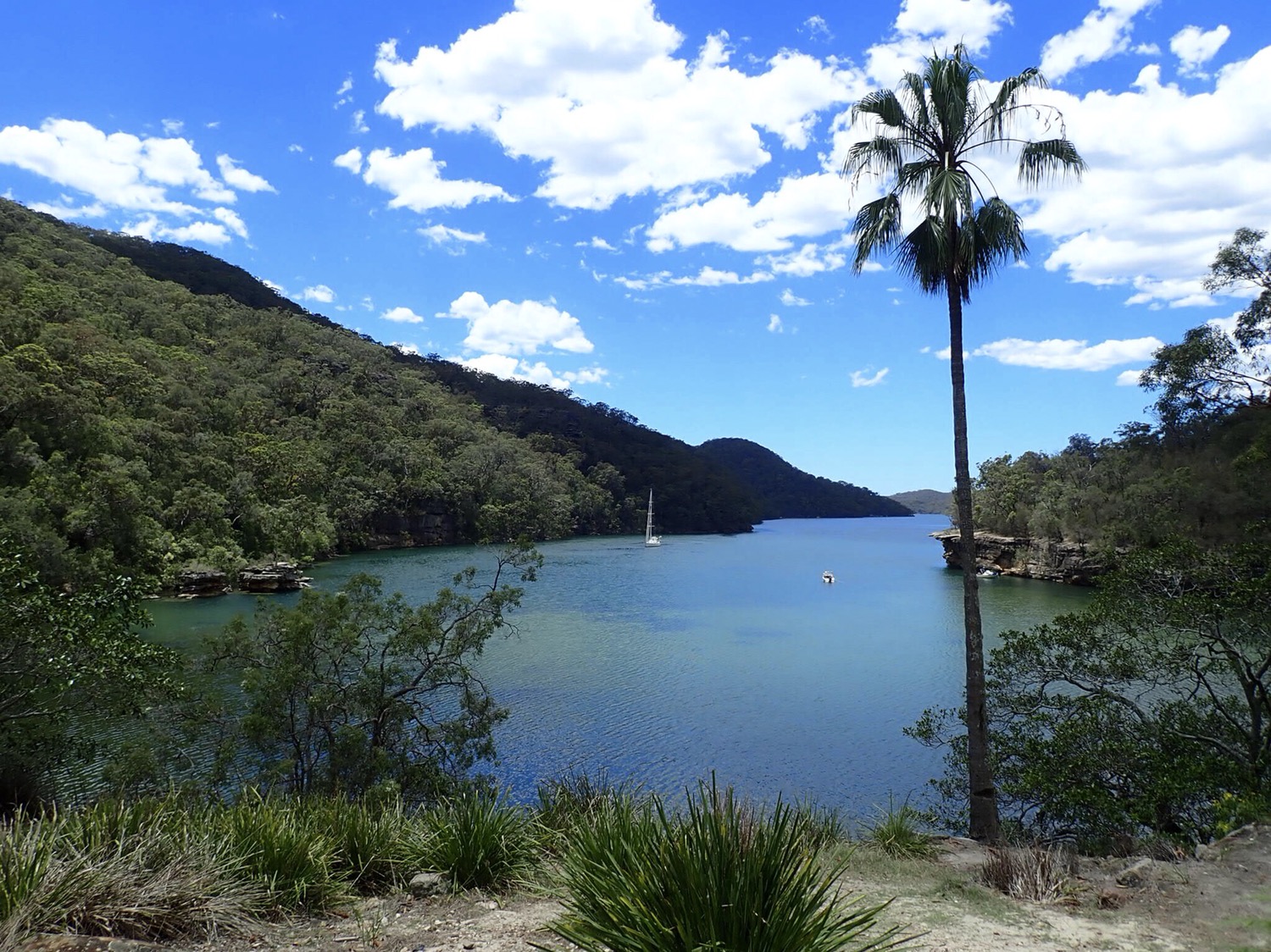 A white breasted sea eagle, sits on nearby branches, king of all he surveys but we see few other birds. The odd splash and the success of a group of local boys with their rod, suggests the presence of fish but in the rather murky water all we see are large plump jelly fish. A few boats come and go, the attraction is a rope that hangs down the cliff face on the opposite bank, once climbed the youngsters jump the 30ft from a rocky overhang back into the water. We guess this means the jelly fish are harmless but the green water doesn’t tempt us in.

Frday morning the still water, overcast skies and light wind, instead,were perfect conditions for a trip up the mast to check the fittings, do some cleaning and a get great picture of Raya.

Raya from the top of the mast

At dusk as the angle of the sun lengthens and the light changes we appear worryingly close to the stone walls that surround us and with the dragging of our anchor a few weeks ago, even a small amount of wind keeps us nervously fixated on the anchor alarm. Our canyon like setting funnels the breeze along its length, but luckily it’s protected location amongst the complex of waterways that make up this area means that even as an infamous East Coast Low came in the winds were never too high. Our two position tracks have had us holding steady at both anchorages.

The low did however disrupt lunch with our friends from Moonshadow. Luckily we had opted not to have a BBQ, but just a few mouthfuls into our meal we were scuttling quickly below with our plates and glasses as what proved to be torrential rain started to encroached into the cockpit. Soon the downpour was accompanied by thunder and then, for a time, by marble sized hail.

With the sunshine back and the weekend in full flow the hordes have arrived, Smiths Creek appears to be a popular spot. The local boats definitely prefer to tie up to moorings, with the few available buoys snapped up early, all around us boats jostle for a space with shallow enough water for there rarely used anchors and shortish chains. Hopefully things will quieten down by nightfall. Then for us it’s on to Sydney.

4 thoughts on “Up the Creek”