Nooooo! Was the plaintive cry, as clambering from the kayak to the swim deck, our beloved much used camera slipped from Ricks shorts into the water and sank almost immediately out of sight. Being too deep to dive down after it and with the evening sun low in the sky, too dark to scuba, our hearts sank too. Why hadn’t we invested in one of those snazzy strap flotation devises, why hadn’t I downloaded all last weeks photos, why hadn’t we passed the camera up by hand as usual!?!?

We pulled ourselves together and swung into action. With the boat swinging back and forth in the brisk breeze I tried to keep my eye on the spot it went in, Rick dug out our marker bouy and dropped it at our best guess of the cameras location. With nothing more to be done until we had more light the next day, we consoled ourselves with a gin and tonic trying hard to enjoy the setting sun.

The next morning we were glad to see the orange buoy still bobbing nearby. Rick kitted up in his scuba gear and descended through the murky water, miraculously after just five minutes he was back camera in hand.. It is waterproof and rated for depths of up to ten metres we were anchored in about nine, but was that ten metres for just an hour or could it survive being at that depth overnight? Apparently yes it could, it seems to have suffered no damage at all from its extended visit to the seabed. 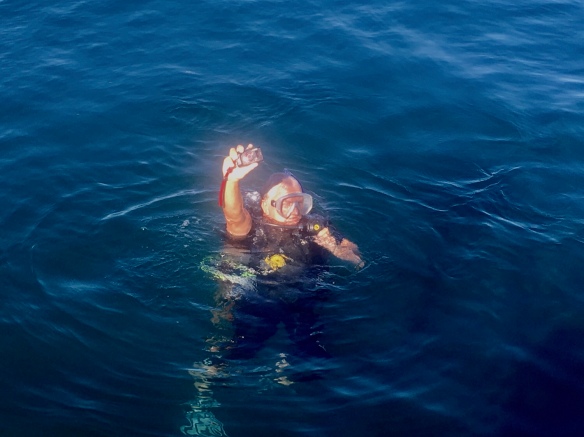 We continue to spend our time criss crossing Sydney Harbour as weather, provisioning and activities dictate. We started this week in Blackwattle Bay. The southerlies from the weekend continued to keep the temperatures cool, so being in the city centre we took the opportunity to be tourists for a couple of days.

We wandered around the maritime museum which displays Australia’s rich maritime history. Then went outside to look around the 1970’s submarine they have on display. Basically just one long corridor from front to back with bunks squeezed in between a maze of piping, pressure gauges, pumps and engines. The mind boggles as to how 69 men lived so dreadfully cramped together for so long. We had first visited the HMAS Onslow about 15 years ago, now ocean going sailors ourselves different questions come to mind; How did they cope with all the heat from the massive engines? How did they make water and how on earth did they manage to fix that joint buried behind a metre deep tangle of pipes?

Not much more spacious were the conditions on the Endevour, the ship that in 1770 James Cook first sailed to Australia but at least the crew onboard her could escape on deck. The ship in Sydney is a replica of the original and actually still sails, in fact she is off to New Zealand next month, we’re certainly glad we don’t have all that rigging to contend with.

The Endeavour moored in Darling Harbour.

Wednesday we walked to the Rocks, an historical area with many original sandstone buildings and cottages from the first development of Sydney by the early settlers. Historically it was a rough area occupied by convicts and run by gangs, even up until the 1970’s it was so run down it was nearly demolished. Now properties are snapped up by wealthy Sydneyites and being next to the cruise liner dock, it is a busy tourist area full of museums, old pubs and art shops. Luckily there was no ship in the day we were there and we found plenty of room to sit, enjoy views of the harbour and eat a very nice lunch.

The promised improved weather moved in on Thursday and we moved out to Manly. We were there to pick up a friends daughter and a couple of her friends for a day on the boat. We filled up with goodies for lunch and picked them up from the ferry terminal.

We love the Push-me Pull-you ferries that run every half an hour between Manly and Central quay in the city.

We all had a great day, chatting, eating and drinking, in fact so pleasant were the beach anchorages. Rick and I decided to spend the weekend off Store Beach. A very popular spot but the crowds don’t seem to appear until around midday and all disappear again around 6pm and so even at the weekends there is plenty of time and space to enjoy a swim, take out the kayak or lose a camera.