With our time in Western Australia rapidly coming to an end, Friday we took a day to visit Fremantle. In the south of the Perth Metropolitan Area, at the mouth of the Swan River, it has been a main port for nearly 200 years and retains much of its original 19th century architecture. We found an eclectic mix of historic buildings, museums, craft markets, art galleries, trendy bars and restaurants.

As we entered the city we noticed the clocktower of the townhall had squares of yellow paint near its top, at first we thought it must be having some renovations done but as we walked down High Street we saw more seemingly random yellow daubs and then stripes curling up from the pavement and onto the buildings. Slightly perplexed we walked on until up the steps of the roundhouse at the end of the street we turned and all was revealed. It is the work of Swiss artist Felice Varini who creates 3D optical illusions in public places all around the world. Designed to be viewed from just this one spot, the yellow lines and squares come together to form a set of eliptical rings that appear to float miraculously above the street. It is mind boggling to imagine how the artist could even conceive such an amazing idea and impressive that the Fremantle council took the risk with one of its prime tourist spots to allow it to happen. 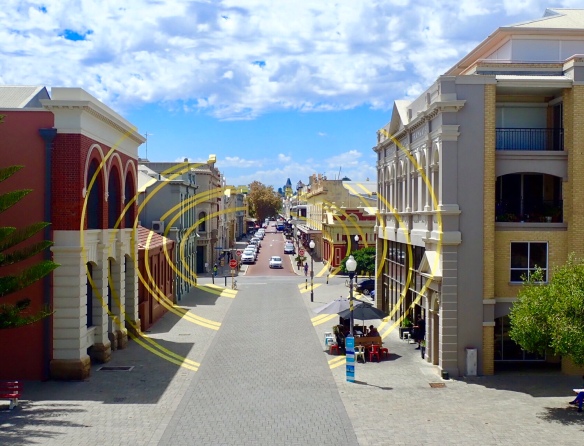 Still glancing back over our shoulders we wandered into an art gallery at the top of the steps displaying beautiful underwater photos, the photographer had done some wonderful things with his images of coral, tropical fish, sharks and rays. Not having the ability to paint whole streets but thinking that we had, maybe not quite of the same quality, but very similar photos, perhaps we could create some of our own Freo inspired artworks.

In complete contrast we then spent an enjoyable hour at the shipwreck museum learning about the early Dutch explorers and more specifically the story of the Batavia. Part of the Dutch East India Company she was wrecked off the WA coast in 1629 amid tales of mutiny and murder. The museum has on display a large section of her hull, salvaged in the early 1970’s along with many arifacts, including cannons, domestic items and part of her cargo, a large stone arch destined for Jakarta.

The next day we were lucky enough to be included in a gathering of Taryn and Greg’s friends for a Peeking duck night. Greg and friend Pete had spent the previous evening preparing the duck. Part of this preparation required the skin of the raw duck being unstuck from the carcass to allow it to crisp more easily. An ingenious solution to this problem led to the bizarre sight of Greg inflating the duck using his scuba tank and regulator. The technique proved its worth the next evening when, after a fun few hours decorating the terrace, we all sat down to delicious Peking duck. 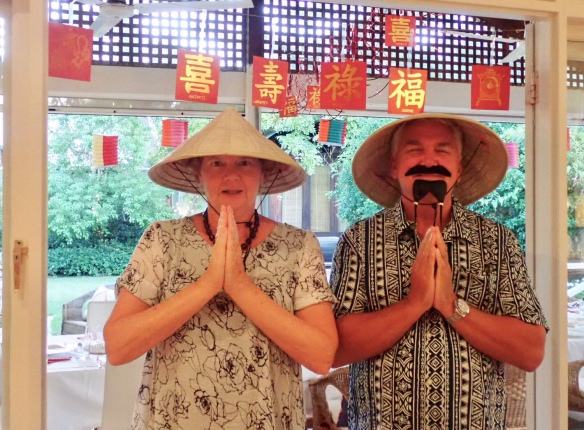 And then before we knew it it was our last day, we opted, before we started our packing, for one last swim in the Indian Ocean.. The surf was relatively small, the water warm and the colours as incredible as always. 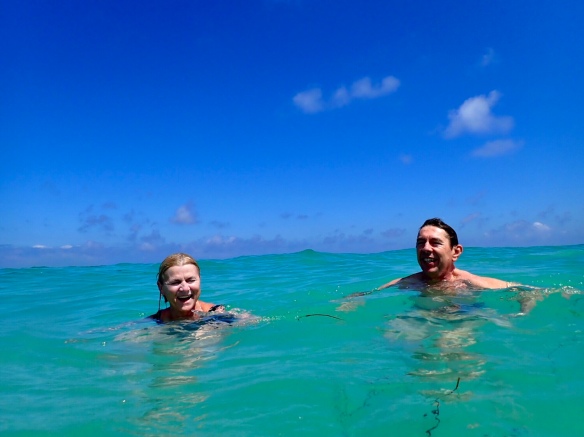 Thanks Taryn and Greg for a great break

Yesterday evening we flew back to Sydney and this morning its back to business on Raya. Rick has his head in the engine room replacing the alternator with a new one sourced in Perth and I’ve just returned from the supermarket with some basic supplies. In my bags there is a heavy emphasis on healthy foods, our stay in Perth did nothing for our already expanding waistlines. However all the walking and swimming we enjoyed has motivated us to start eating less and exercising more. Watch this space……….