I’m sitting below in the stuffy atmosphere created by high humidity and closed hatches. Excyclone Iris is just NE of us and is bringing squally winds and heavy showers. Up and down the coast of Queensland the ocean beaches are closed due to extreme high tides and dangerous surf conditions.

We are anchored off South Stadbroke Island back in the protected inner waterway of Broadwater just north of Southport. It’s Easter weekend so again the area is crowded with craft big and small. It doesn’t really feel like we are anchored as not only are we being continually buffeted by the wake of passing speedboats, we are also not facing into the wind. A two knot tide is flowing past us and we are laying with the current rather than with the wind, this in turn means the rain is coming straight into the cockpit and if not closed down through the hatch.

Last weekends confinent on the hardstand in Boatworks, turned out to be better than expected. The frenetic whirling sanders, polishers and drills and the continuous loud engines of the lifts, that set such a stressful pace to life, all fell quiet. The noxious fumes from the antifouling and painting of dozens of boats dissipated and with no contractors busy around Raya, it was easier to relax. On top of this we had a car. Boatworks not only have good toilets, showers and laundry facilities they also have curtesy cars and we managed to get a set of keys for the weekend.

We used this rare opportunity to hit the nearest shopping centre. While Rick investigated the DIY Warehouse and tool shops, I went into the supermarket and filled a trolly with as much heavy stuff as I could fit in. We restocked all our dried goods and cans, cases of wine and beer and bags full of cleaning agents. Rick bought the biggest adjustable spanner in the universe. Never again would he have to struggle so hard against recalcitrant seacocks or any other ginormous nut for that matter, how have we got this far without one?

Having a car also made it easy to join some friends for a bit of a reunion. Phil and Lynn who we linked up with on the Gold Coast last November, had a couple of other mutual friends, Kieth and Dianne, from our time living in Bahrain thirty years ago, visiting from Spain. We all met up at Sactuary Cove, a typical glitzy Gold Coast Resort, golf courses, gated communities, a marina and dozens of restaurants. We couldn’t work out why all the car parking spaces were so small, until it dawned on us that the people living in the resort mostly get around by golf cart. Real cars, such as our Boatworks Ute, were banished to the car park on its outer edge. Finally seated it was great to catch up with each other’s news, the food lost in the exuberant chatter. 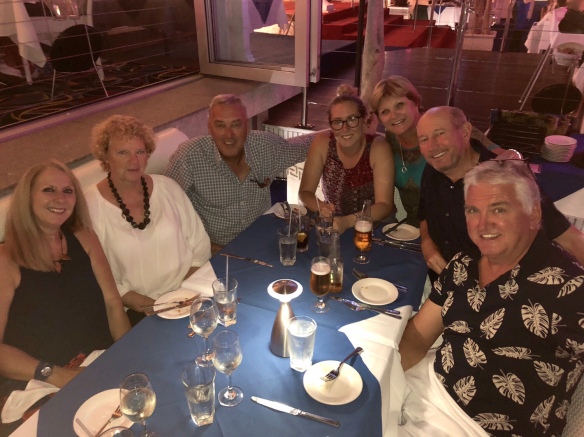 Tuesday morning, finally, Raya was lifted back into the water. The relief from the overheating fridges and freezer, that are water cooled, was almost audible and the comfort of having our sinks and showers back, a delight. A downpour however evidenced a blocked cockpit drain, we poked and rattled and finally blew it out with a hosepipe. One of the rags used by the antifoul team to prevent dripping from the drains during painting is the prime suspect. Luckily the problem was found sat at the dock not while waves were breaking over the boat as we battled a storm at sea.

The tide dictated that we leave early on Thursday morning despite the showers. We motored down the Coomera River observing the huge waterfront houses, so large and ornate were some that they were best described by a phrase coined by an American friend as Starter Castles. In the whole hour we saw nobody actually living in them, sun loungers were stacked and blinds were drawn. The rain turned into a deluge and by the time we had anchored we resembled a pair of drowned rats.

Motoring down the Coomera River in the torrential rain.

As Good Friday comes to an end, the weather has improved a little, the tide has turned and the stream of motor boats has stopped for the night. No doubt tomorrow they will be back but for now all is tranquil.

2 thoughts on “Rain, Repairs and Reunions”