We wake this morning after 12hrs of solid sleep, a little further north than expected. The decks are covered in salt, damp clothes fill the laundry basket and two shattered plates languish in the bin. Our attempts to enter over the bar of our planned destination of Mooloolaba thwarted, we sailed through the night and all the next day in uncomfortable and tiring conditions to reach the Marina at Port Bundaberg.

Tuesday had started with us happily wending our way through the sand banks that litter Moreton Bay, the sun was shinning and the sea was calm. We were taking advantage of a small window of good weather to move 35 miles north to Mooloolaba. We had been looking forward to a few days in Mooloolaba and not just because it has such a brilliant name, other cruisers reports had all been good, the town was close by and it had a great beach just a stroll from the marina. Also it was to be our gateway to explore the Sunshine Coast and the Noosa Everglades.

The entrance to the river and it’s marinas has another of the notorious East Coast bars and is currently being dredged to try and combat the effects of shifting sand across the river entrance. We spoke with the marina, who assured us it would be fine and we downloaded the map that charted the new depths that had recently been posted in the Notices to Marinas published by the Queensland authorities, we timed our entrance towards the end of the rising tide. However we hadn’t reckoned with the swell. As we approached what the charts had as the beginning of the shallows, with an apparent high tide depth of 4m, the swell picked us up and then dropped us with a thump onto the bottom, we ventured a bit further this time we stayed on the sand long enough for another wave to hit us and cause Raya to give a loud, rig rattling, shudder. We reversed quickly and spoke to the dredge master working in the channel, a lot of sucked teeth, he seemed very unsure about our 2.4m draft, depths were obviously not as reported. Probably with a bit of local knowledge or at least some lat/long calibration which strangely was not on the downloaded new Mooloolaba bar chart, we might have tried again. But after a bit of deliberation and watching other boats with much less draft than us struggle, we decided to push on.

Unfortunately pushing on meant an over 200nm sail further north to Bundaberg. 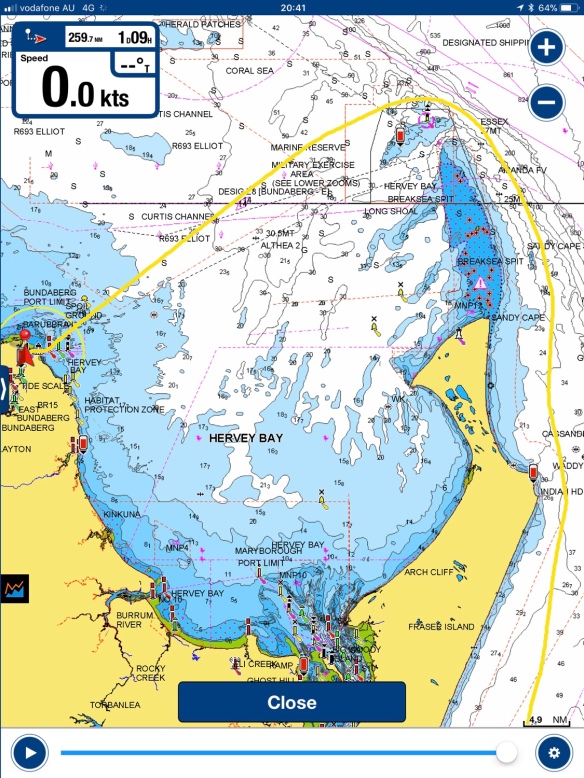 It felt like a long trek north around Fraser Island

I quickly put together a new passage plan, there was another entrance about 6hrs on but we would arrive after dark and it was quickly rejected. The weather forecast was for winds to strengthen and with it the seas to get rougher, not a delightful prospect. And this is the problem with sailing in this part of the world, with weather windows so tight and safe havens so far apart, often needing critical timings and conditions for entry, Plan B’s are always going to be difficult.

The first few hours were fine as we sailed away from Mooloolaba. We smiled in response to a surprise comment on sailraya.com, received from someone who spotted us sailing past. However as the winds steadily increased in strength it turned into a laborious 24hrs, in troubled, often beam seas. Sleeping, eating and everything in between became hard work and the cockpit began to be splashed enough to make everything damp and salty. At least it was warm and not raining we kept telling ourselves. With the odd gust up to 40kts, Rick gradually reefed and further reefed the sails until, still sailing fast, we only had up a small amount of main sail and a reefed stay sail. To add to the fun I was kept entertained during my 11-2 night watch by a dozen or so fishing boats, some with AIS, some without. At one stage one came so quickly towards us I was concerned he hadn’t seen us . Luckily we have good deck lights that light up the sails and make us very obvious. I flicked them on and he turned away.

With such messy seas we had to sail right the way around the 25nm long sand spit at the end of Fraser Island, so for a frustrating few hours we were actually sailing away from our destination. We arrived at the marina just minutes before they left for the day, two very tired and happy sailors. Our traditional ‘got here beer’ was enough to knock us out and by 7.30 we could stay awake no longer.

On the upside we are now far north enough to be in the region termed the Southern Barrier Reef which is rather exciting and after spending yet more money on our continually ailing freezer, that would normally give out after such a bouncy sail, I am pleased to report it is still working, hooray!

8 thoughts on “Barred From Mooloolaba”