We don’t really feel we are seeing Cairns at its best, unbelievably it is still raining. We dash around, heads down, trying to get from one place to another without becoming too wet.

Today, to escape cabin fever, I risked the drizzle and went out to stretch my legs on the waterfront boardwalk. When we arrived last week, we had one day of sunshine, this area was teaming with people, visitors and local families wandered along the paths entertained by buskers and street performers, today the paths were almost deserted. The attractive artificial lagoon sat empty and forlorn, a few groups of backpacking kids huddled under trees damp and dazed from the previous nights revelries, rain coated Chinese tourists shelter under umbrellas putting on a brave face determinedly continuing to snap photos, even the pelicans seem to have had enough of the weather. 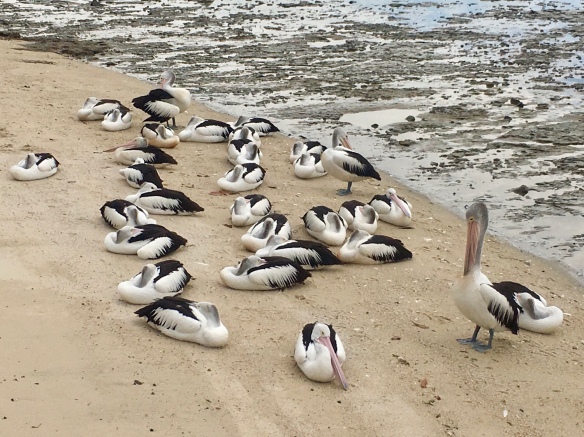 Pelicans on a rainy Cairns beach

Despite the rain we carried on with our plans to hire a car. Tuesday we used it for a last scout around the chandleries and for a final stock up on provisions for our trip to Indonesia. Every locker onboard now groans with goodies.

Wednesday we treated ourselves to a day out, driving up the coast to Mossman Gorge and the Daintree River. The coast road sweeps dramatically around bays and over headlands but the normally blue sea looked green and murky under the grey skies and the beaches damp and windswept in the drizzle.

On the upside the weather had kept many people away, so our visit to Mossman Gorge was relatively uncrowded. The gorge sits in the southern end of the Daintree Forest, one of the Worlds oldest continuing forests. Having escaped ice ages and volcanic destruction it is thought to have been around for 135 million years. A few of the plants are of ancient origin and found uniquely in this area.

The atmosphere inside the forest is extremely humid, creating a marvellous earthy scent, the sound of cascading water and an intense green surrounds you. Despite all evidence to the contrary this is the dry season and the Mossman River flowed gently through the boulders, tumbling over small waterfalls. All around however, signs and markers warned of the rivers potential power, after torrential summer downpours it becomes a dangerous raging torrent whisking away everything in its path and frequently breaking its banks. 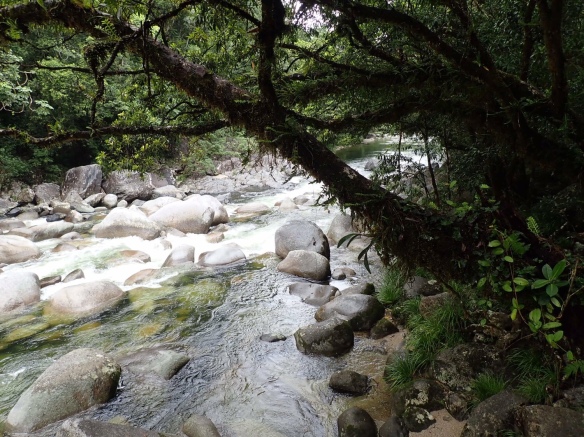 In the afternoon we travelled further north to a much more tranquil River, the Daintree. We had a river trip booked for 4pm in one of the smaller tourist boats. Boatman Daintree River Tours run trips at dawn and dusk when the birds and animals are more easily spotted along the banks. Unfortunately so dismal were the conditions I think most of the wildlife were sitting sheltering inside the densely forested banks looking out at us instead. However our prime objective was to see a crocodile and luckily Scarface, a large male, was obligingly sitting on his favourite patch of low tide sand. 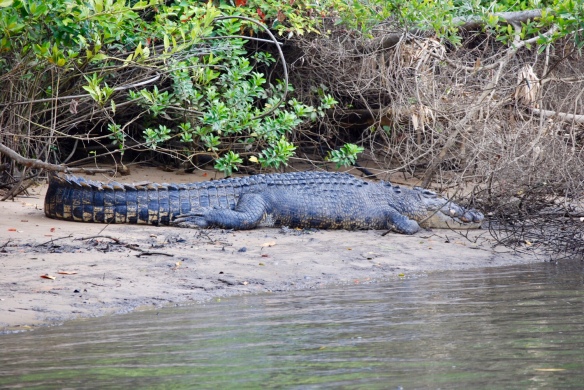 Being a small craft we were able to meander up narrower creeks, Murray our extremely knowledgable guide filling the void left by the lack of animals with fascinating information about the passing trees and shrubs. Who knew that the mangroves here survive their tidal salty homes by growing vertical aerial roots that act a bit like snorkels helping with the uptake of oxygen as the tide ebbs and floods. To cope with the excess salt, as well as filtering as much salt as possible through their roots, they sacrifice a proportion of their leaves to gather salt, the leaves turn brown and drop off taking the salt with them. 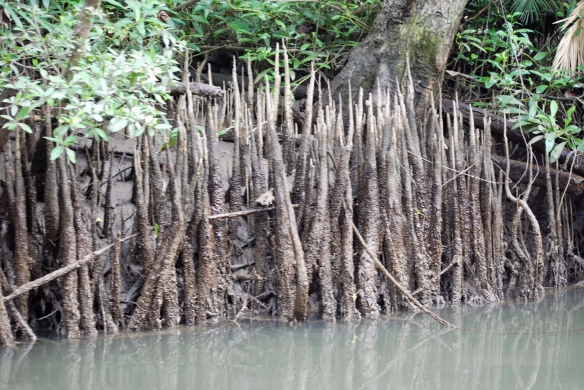 Aerial roots of the Mangrove trees

As we rejoined the river, Murray spotted a giant billed heron flying near by. A secretive bird, a sighting is much sort after by the birding community, which explained the excitement from our fellow passenger who set his camera, bedecked with a huge telephoto lens, into action. The heron settled on a nearby tree and we moved in for a closer look, to our surprise it let out a croaky growl, a sound as far away from bird song as you could imagine. Over a meter tall they spear fish in the shallows but have been known to eat small snakes and even baby crocodiles. 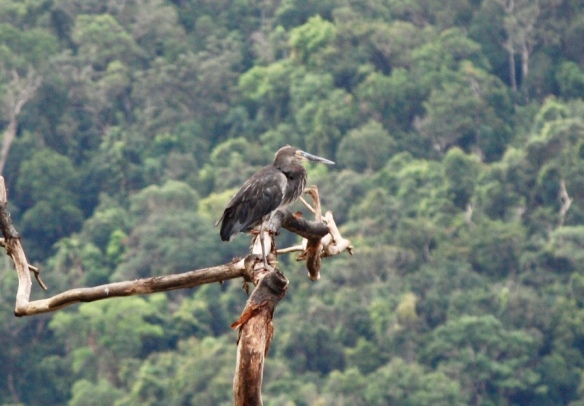 A rather damp and ruffled giant billed heron

Back at the marina it was time for the Indonesian Rally briefing, the blue sea and skies of our destinations, looking even more alluring against the backdrop of rain out of the window. The presentation was followed by a pirates party and the Indonesian Rally participants were joined in the Cairns Yacht Squadron bar by the crews from the Oyster Rally. Feeling rather betwixt and between, we wandered from one group to another and had a very enjoyable evening. 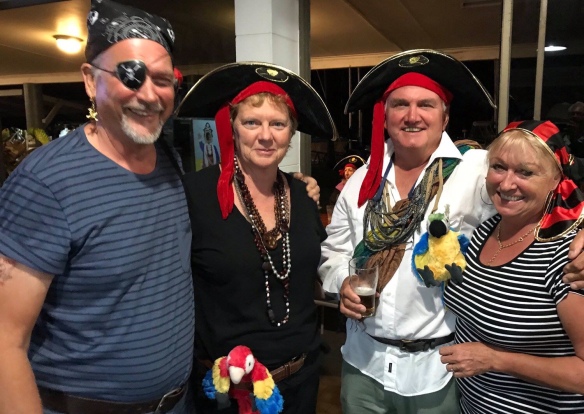 There are signs in the forecast for less rain next week, we plan to leave Thursday, it would be nice to see Cairns in the sunshine before we go..

4 thoughts on “Salties, Showers and Swashbuckling”