We have arrived at Thursday Island at the very most northern point of Australia. Towards the end of the week we will check out at customs and head for Indonesia, our Australian East Coast adventure completed.

You can find our track at http://my.yb.tl/sailrayatracking/

The anchorage at TI, as Thursday Island is known, is rather bumpy, so the fleet of the sail2Indonesia rally have congregated a mile or so southeast off Horn Island. As soon as we stepped ashore we knew we were back to Island life. The dodgy dock was crowded, the roads and pavements were full of pot holes and the supermarket, well let’s just say we need to reset our expectations. 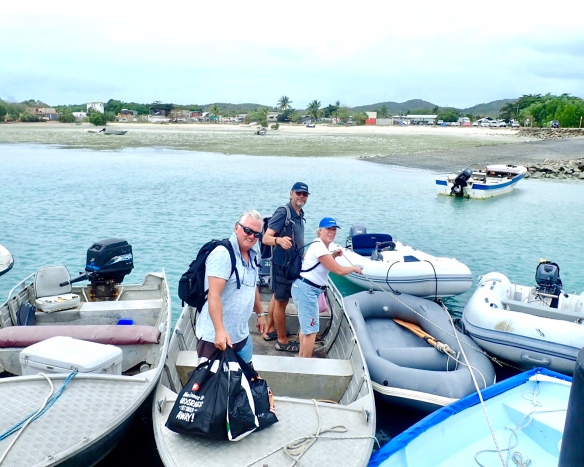 Getting the shopping into the dingy was a bit of a challenge for us and the guys on Alexandra.

The last few days of sailing up the coast continued to be good, although with the ever narrowing shipping channels winding their way through the reefs and islands, a good look out was required at all times and with the frequent changes of direction, sail changes made for a busy trip.

On the first night we stopped at a recommended anchorage off Morris Island. Just a tiny speck on the chart and not much bigger in real life, we were doubtful that it could give us any protection and prepared ourselves mentally to sail on through the night. Little more than a long sand spit about half a kilometre long, with just one palm tree and a bit of scrub there was no let up in the SE wind but surrounded by a large reef the swell disappeared, so we dropped anchor and got some rest. We had caught a large Spanish Mackerel in the morning but all plans of sharing a fish supper with our fellow cruisers was quashed, the wind deterring us from lowering our dinghies.

The next day, Wednesday, we set off on the 24hr sail up to Adolphus Island, just off of Cape York it was a good launching point to time our arrival through the tide driven currents of the Torres Straight. 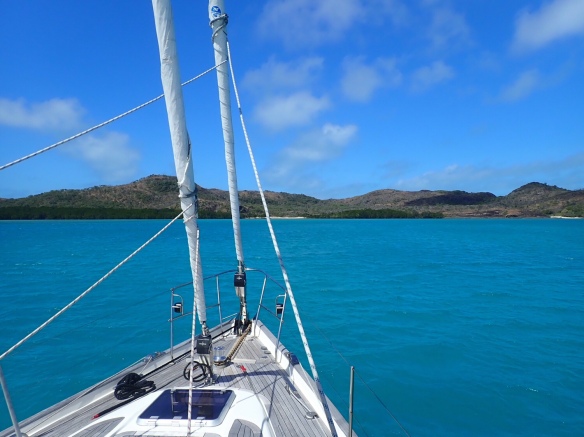 We still had no internet so I still had no Navionics on my iPad, I was dependant on the guys on True Blue and Matt on his computer in the U.K. to work out the tide times for us. With their help Raya was whisked along by a 3kt current into the anchorage at Horn Island. 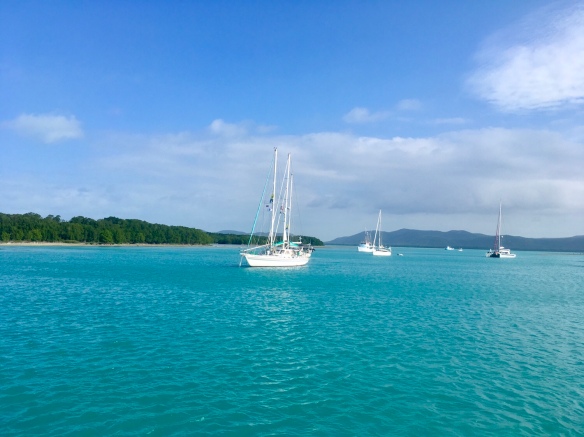 Anchored with the rally fleet off Horn Island

The promise of a bigger supermarket and a couple of restaurants, meant yesterday we took the ferry to Thursday Island. It’s a great system with the ferry Captain also being the bus driver. Once the ferry docks, everyone moves to a mini bus and is dropped around the small town and island as required. To return, you just call for the bus who picks you up and delivers you back to the ferry. With the security of the driver of both being the same person you know the ferry can’t leave without you.

Being only 10 degrees South of the equator we are deffinatly back in the tropics and we had to remind ourselves to slow down in the humid heat. With only one main street and the sea front, we easily found our way around and although bigger and a bit smarter than Horn Island, it still felt a very long way away from the Australia we had left behind in Cairns.

Harry the local croc lounging on the banks of the anchorage