Hanging on, precariously against the messy seas and high winds, a masked booby taking a rest from the buffeting of these gusty conditions, perches on our dingy. I, in a similar state, sit huddled in the corner of the cockpit, his presence breaking the monotony of my night watch. The predawn sky gradually lightens to reveal another day of rough seas. The best thing that can be said about our passage from Lombok to Cocos Keeling is that it’s been fast, we covered the 1141nm in just a few hours over 6 days. 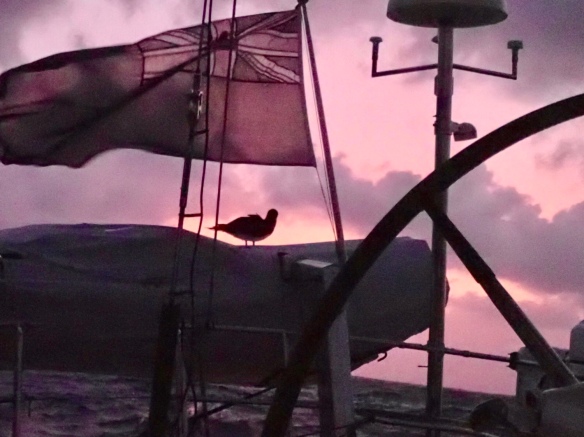 Masked Bobbie resting on the dingy

You would think that after 25,000nm, the milestone we reached a few days ago, that we would be better at reading weather forecasts and that we would realise that 12kts really means 8kts ie not enough to sail by, which is what we had for the first two days and that 20kts actually means well over 30kts, producing the rough seas that plagued us for the rest of the journey.

It’s not that these rough seas were scary, even as large waves loom over us, Raya copes with these conditions as if they are all in a days work but it is really uncomfortable. Eating and other essential tasks become difficult and sleeping is near on impossible. On our off watches we roam the boat, steadying ourselves between handrails, dragging a quilt, trying to find the best place to sleep in the current conditions. Some times diagonally across the main bed works, or perhaps wedged into a bunk bed with a lea cloth or maybe the best spot is in a nest of pillows on the sofa. Often there isn’t anywhere that works and it’s just a matter of closing your eyes and trying to get what rest you can.

The captain clinging on while he catches up on some sleep

The big waves also brought us less welcome visitors. Flying fish flew on to the deck and into the cockpit in shoals, their frantic flapping leaving scales all over the place and making them impossible to pick up and throw back into the sea. One hit Rick square on the head, others bounced off the Bimini which must amazingly be 4 or 5m above their watery home, while others we found caught in the halyards on the mast.

We left Marina del Ray last Thursday for an anchorage away from the islands and pearl farms that surround Gili Gede to make for an easier get away the next day. We wanted to tackle the strait between Lombok and Bali in the lighter, early morning, breezes. It was still a challenge to avoid the worst of the overfalls but the 5kt current whisked us quickly out from Indonesia into the Indian Ocean.

The Indian Ocean, we really are on our way home now. With only seven or so weeks left before the cyclone season hits this area and with nearly 5000nm to cover we will for the first time on this trip be sailing for as much as we are at anchor. As we watched the turbulent water around us, discussed whether it was worth fighting the elements to make a cup of tea or sat through a chilly, drizzly night, the prospect of weeks at sea didn’t really appeal.

However this morning the sea had calmed a little and with just 10nm to go we spotted the last of the Oyster rally fleet leaving the atoll of the South Keeling Islands. Our spirits rose as we chatted on the radio to our friends on True Blue who gave us their top tips for enjoying our stay. And as we rounded Direction Island and entered the lagoon we were greeted with clear, calm, turquoise seas and three small black tip sharks. We were promptly checked in by the friendly Cocos Keeling police, washed our salt covered decks and drank our ‘got here beer’. This life’s not so bad, as they say, no pain, no gain.

Motoring in to the lagoon off Direction Island