Sitting atop a sea mount rising from the sea bed 5000m below, Cocos Keeling is 600nm SE of Java and over thousand miles NW of Australia, it is the very definition of the middle of nowhere. Two stunning coral atolls comprising of 27 white sand islands, topped with palm trees and of course surrounded by turquoise seas. 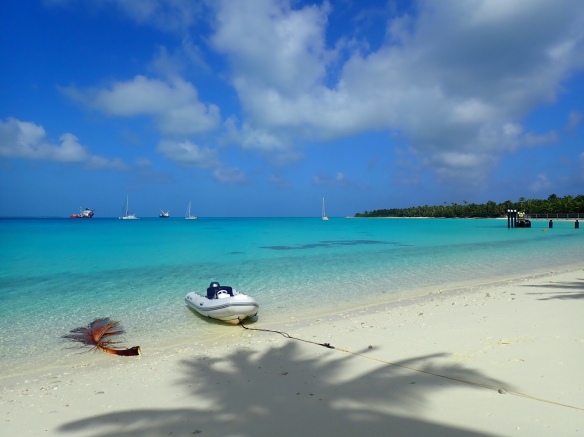 The anchorage off Direction Island

For such a remote spot we have discovered it has a lively history. The inside of the Southern Atoll has provided, in the aptly named Refuge Bay, protection for passing ships for centuries and we in that long tradition are anchored in its lagoon off Direction Island. It was first put on the map by a whaler from the Scottish Clunies-Ross family, who in the early 19th century settled here, bringing in hundreds of Malay workers with whom he set up a successful coconut plantation.

At the beginning of the 20th century things began to change. As telegraph communications become more important, in 1901 a cable was laid from Perth in Australia to a repeater station on Direction Island and then on to Singapore and Mauritius providing a link from Australia to London. With the coming of the World Wars the islands strategic position became even more clear to the Australian government and in the 1950s, it would appear rather underhandedly, the Governor of the the time John Clunies-Ross was accused of practicing slavery, shamed and bankrupted. Cocos Keeling became part of Australia.

Oceana House the grand family home still stands on Home Island. After years of neglect it was bought by an Australian couple Avril and Lloyd and just in time its expansive teak panelling, wooden floors and ornate terraces are beginning to be restored.

Home island, a very wet 2nm dingy ride away from the anchorage, has that sleepy island feel that we have found in many isolated ocean islands. It is home to the majority of the Muslim Malay population and with only short distances to travel in their small town they get around slightly incongruously in golf buggies. There is a small museum, a supermarket, island administrative buildings and a brand new cyclone shelter. But our destination is almost always, the pavilion, here overlooking the beach and lagoon is an internet hotspot, every couple of days we sit, dripping from the journey, catching up with our emails and downloading the weather.

Connecting with the rest of the world

West Island, that forms a large part of the western lagoon edge, houses most of the Australian residents, a further supermarket, a cafe and the airport. Saturday our friend Richard was flying in from the UK to join us on the leg to Mauritius and Reunion. With the demise of our Bimini and sprayhood earlier in the year, we also had a large box of replacement canvas work, very efficiently supplied by Dolphin sails in the U.K. to pick up. Add on the fact that fresh groceries had arrived on the island that day, which I with seemingly the rest of the population, rushed to snap up before stocks dwindled, meant it was three very ladened sailors that made the convoluted trek back to Raya. First step was to take a shuttle bus from the town to the ferry dock, then it required two ferry crossings from West Island to Home Island, one for people and one for cargo and then being too loaded down for the dingy, we had to arrange a water taxi back to the boat. It took a while but we made it and Richard is unpacked, the new sprayhood up and the fridge full.

As we wait for the rather windy weather to calm down before we head off on the two week passage to Mauritius, we have been enjoying this rather special place. As well as learning about the islands history we have been following trails through land thick with palm trees, socialising with the World ARC boats that have gradually being filling the anchorage and snorkelling ‘The Rip’.

The Rip is a channel cutting through the coral at the end of Direction Island, the current runs at about 3kts and it is full of large grouper, trevally and white tip sharks, all enjoying the fast flow of nutrients. The coral walls either side provide overhangs, crevasses and bommies crowded with smaller fish. The dingy firmly in tow it made for a great, if rather quick, drift snorkel. 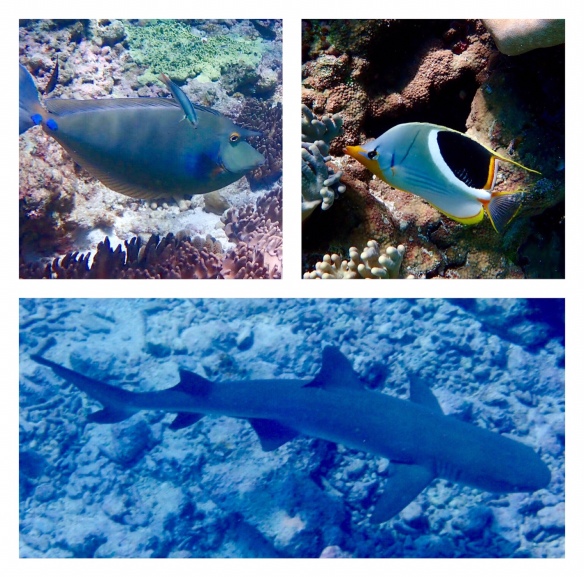 Inhabitants of the Rip

Today the wind is stronger than ever, the fetch across the lagoon forming white horses, we have put on our swimmers to make the crossing to the pavilion and are temporary connected to the world.