Marigot Bay became much more fun with arrival from the UK of Phil and Julia and then three more Oysters, two of whom were celebrating the finish of their circumnavigation as they sailed into the bay.

Undeterred by their long journey Phil and Julia were happy to get straight into the Caribbean vibe, we took the dingy across the bay in time to watch the sunset with a rum punch. Doolittle’s restaurant, is named after the 1967 movie Dr Dolittle that was partly filmed in the bay. The rum punches turned out to be extremely strong and although there are no longer any animals here to talk to that didn’t stop us from trying.

It was four groggy passengers that joined our driver for a short tour of the island at 9am the next morning, the steep, windy roads testing our constitutions. The views were spectacular despite the succession of showers that were passing over the island. Near the coast we looked down on a sparkling blue sea full of yachts, beaches where rows of local fishing boats sat back from the often black sand and valleys full of tightly packed colourful roofs. 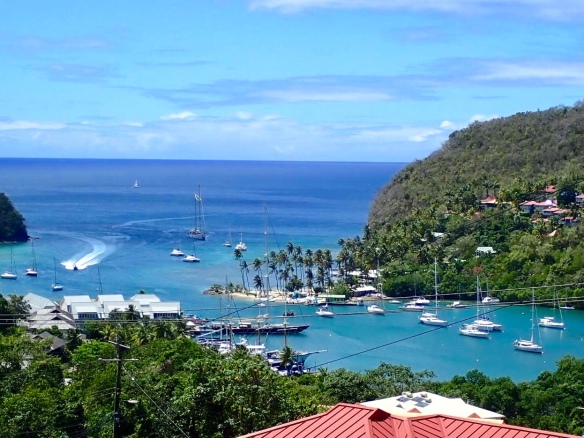 Marigot Bay from the cliff top

Inland we climbed high into the rainforest, the air became humid and the smell of the undergrowth thick and peaty. Huge ferns, leaves the size of a child, jostled for space in the thick undergrowth with fruit trees and large clumps of 15ft high bamboo. Deep valleys like gashes in the landscape made for precarious drop offs right next to the road.

The Pitons, two, tall, narrow peaks are the symbol of St Lucia and stand in the middle of a still active volcanic area. We gave the crowded natural hot springs a miss and went straight to see the centre of the collapsed caldera with its pools of boiling mud and steam vents. We didn’t stay long a combination of the sulphurous air and darkening skies sent us scurrying back to the car.

Our final visit was to the botanic gardens, an oasis of lush greenery and a feast of exotic flowers. We marvelled at the incredible shapes and colours of the blooms, it hardly seemed possible that they had evolved naturally. A tiny iridescent humming bird hovered enjoying the nectar, a waterfall cascaded over a cliff and a stream, coloured grey from volcanic minerals, meander downward.

Monday still feeling a bit tired and with the weather against us, we decided to spend one more day in Marigot Bay. The showers had turned into longer periods of rain but with the temperatures still warm we headed for the pool. The sun beds were covered with puddles of water and the towels sodden but the restaurant was open and a very talented singer was in full song. We spent a pleasant couple of hours swimming in the rain and drinking beer at the swim up bar. 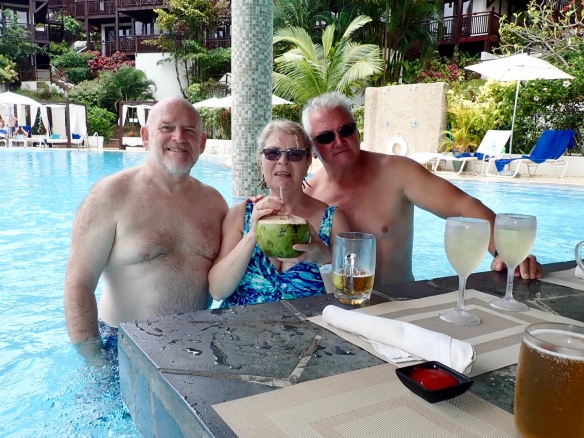 What else is there to do on a rainy day

During the day the bay had become crowded with Oyster yachts, five in total. For our friends on Vela, whom we’d last seen in Richards Bay South Africa, Marigot Bay marked the completion of their circumnavigation. So that night they invited us all onboard to celebrate. With a lot of the round the world yachts reaching their completion points in the Caribbean it looks like a few more reunions and bottles of champagne are still to come.

8 thoughts on “Rum, Rain and Reunions”