We had a fabulous berth in Baiona. it was protected from the wind and the wake from passing traffic but had great views over the town. On the marina side of the headland the water was calm and blue, but on the beach just a few hundred meters away, the other side of the headland, the waves were crashing on to the rocks. The best of both worlds. 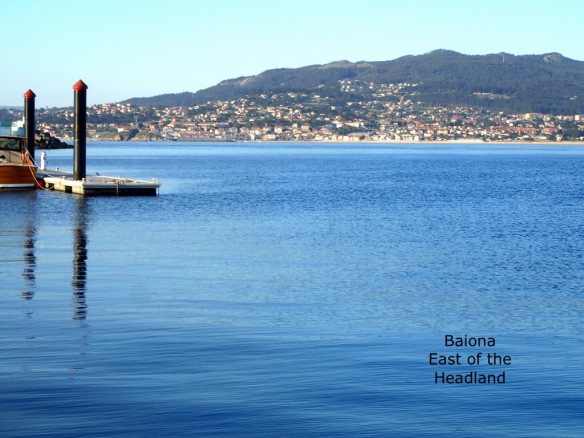 Duncan and Brad arrived on Tuesday to sail with us on the overnight passage from Baiona to Cascais in Portugal. We took Wednesday to familiarise them with the boat and do last minute preparations. This included erecting the Bimini (a canvas roof over the cockpit) as with the improved weather we needed some shade. We washed the last of the Southampton grime from the hull and enjoyed the excellent local wine. The crew proved their worth early on. Brad helped a scooter rider who’d fallen off his bike while we were enroute to the supermarket and Duncan who had taken our dingy for a fun ride around the bay ended up rescuing a fisherman stranded with no engine and needing a tow back to the dock. He was rewarded with a bundle of razor clams, we didn’t really know quite what to do with them, so decided to cook them as we would muscles. We steamed them in butter, garlic, lemon juice and white wine. Unfortunately the result wasn’t as good as expected and being conscious of the state of our stomachs for the journey ahead most of them ended up over the side.

We set off early, struggling with just a small breeze that was directly behind us. The boat is not brilliant in light airs, so we turned west on a track that took us a bit further offshore, in search of wind. And we found plenty, as the day came to an end we had around 30 – 35kts of it. The sea got quite big too with a large swell coming in from the Atlantic. Raya as before took it all in her stride and with a stricter pill regime I didn’t get seasick, a huge relief. We again came across plenty of traffic, cargo and fishing, demanding our concentration and ensuring we stayed wide awake. In the early hours we clocked up our first one thousand miles, just another thirty odd thousand to go.

As we got further offshore we passed over a ridge in the ocean floor where our chart told us the depth went from 200 to an amazing 4000m deep in just 5nm. That’s quite a steep cliff by any standards and probably contributed to the rough conditions. However it was a beautiful clear night with a bright 3/4 moon, for a while it was directly in front of us and its light created a silvery path for us to follow. As it set at about 3.30am the stars came into there own, millions of them filling the sky. Unfortunately it was hard to easily appreciate them in their full splendour as we have a ‘no leaving the cockpit’ rule at night and now with the Bimini up it blocks our view, a conundrum yet to be solved.

To our delight, another highlight of the passage, was the arrival of Dolphins, during the 36hr sail we were joined by three pods. I don’t know if there is an official explanation as to why Dolphins swim with boats but from the deck of Raya it seemed obvious they had come to play, they swam fast next to our hull, surfed in the waves and dived under our bows.

As we approached Cascais we had to sail through a minefield of fishing pots, which for reasons best known to the fishermen are marked with sticks bearing blue, green or black flags, ie the colours of the sea and almost impossible to spot. The crew were put on lookout duty and we managed to get through without hitting any although it was very close with a couple of them. 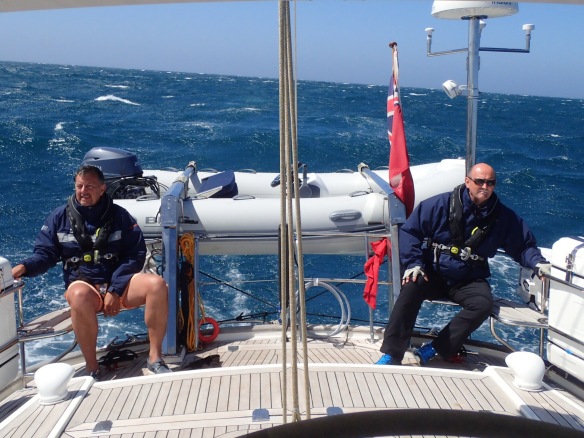 Despite our offshore detour, we arrived in Cascais an hour ahead of schedule tying up to the waiting dock at 5pm. All feeling a bit weary we were rather dismayed to be directed to a berth in the corner of the marina with limited room to manoeuvre. We have been dreading the stern to parking that is common in the Med but knew we would have to do it at some point and this was that moment. Rick a little stressed, did a great job, with restricted depth and a huge concrete marina wall looming over us, he reversed into our berth without incident.

Next came what’s becoming the customary cold beer, then a shower, food and a night without lea cloths.

8 thoughts on “Dolphins, moonlight and miles”