Our week in Palma has whizzed by and we have achieved most of what we wanted to do. I am discovering that on a boat not only does the jobs list never get shorter but there is rarely a clean tick in the completed column.

For example, we did a lot of cleaning, including both bathrooms which were scrubbed top to bottom, chemicals were flushed generously through all the systems but alas we still have, occasionally, a rather unpleasant odor lingering from somewhere.

Rick mended 2 of the 3 wobbly stantions, the screws to which are, like much of the things on a yacht, around a corner, under a panel, at the back of a cupboard and require a contortionist to reach them. The third one proved just too difficult and has been left for another time.

He also cleaned and blew through all the air conditioning units and now they are working, most of the time, sort of, when they want to. Also to keep us cool we have for the first time put up our large canvass awning, created with the idea of anchorages in the South Pacific in our heads but equally good in Palma. It has been great keeping the whole cockpit and a lot of below shaded and funnels the breeze through where it is needed. We haven’t quite got it as tensioned as it could be but it is 95% done. 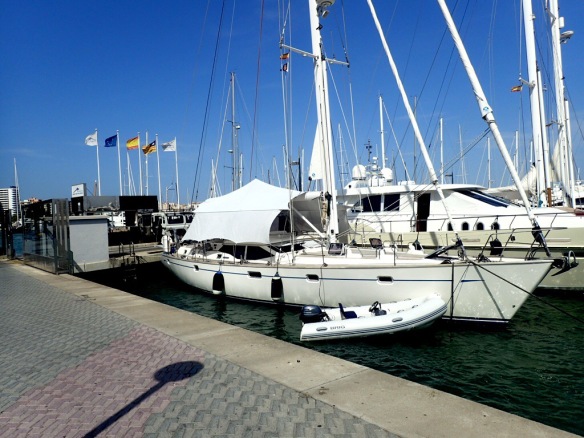 We have had the freezer people here all week, the freezer being as temperamental as always working one minute, failing the next. They have run nitrogen through all of the pipes to remove air bubbles and moisture from the system and recharged it with gas. Looks good at the moment, could this be one completely completed tick, maybe, but I’m not convinced enough to refill it quite yet.

Also, rather annoyingly for such an upmarket Marina, the wifi they provide is so weak as to be unusable. I was banking on this week to catch up on some admin especially on the rental house in Southampton. So I have given in and bought a Spanish 4G sim for my IPad, however I am eating into my data limit rather quickly so must ration myself. It has been surprising, firstly how difficult getting good wifi has been and secondly how much I miss it. Not just for the essentials of email, weather forecasting and admin, I miss keeping up with my friends on Facebook, reading the BBC News website, looking up information about things and places we come across on our journey and of course publishing this blog.

The deck lockers, which were on my list to sort out, still remain in a jumble, only two thirds of the shopping list was acquired at the Chandlers and I have yet to do the big stock up at the supermarket, but hey, we did get the laundry done.

6 thoughts on “Never quite done”