It is Friday the 13th and our destination was the village of Terror, this is not an ARC trip for the superstitious. As we wind up the steep narrow roads our coach seemingly oblivious to the oncoming traffic the name becomes more and more literal. I was on my way to help plant trees with a group of other ARC participants joining for the morning a project to reforest a section of Grand Canaria. The Canaries despite its volcanoes and large areas of urbanisation is in fact a bio diversity World hot spot and I was doing my tiny bit to help keep it that way.

It was great to be surrounded by green instead of the concrete of the marina and despite the mist the views were good. However my tiny bit turned out to be extremely hard work, the planting area was at the top of a very steep hill and we were then presented with a cross between a hoe and a pick axe. One aching body later I had managed to plant six or seven trees and as a group we managed 190 between us. 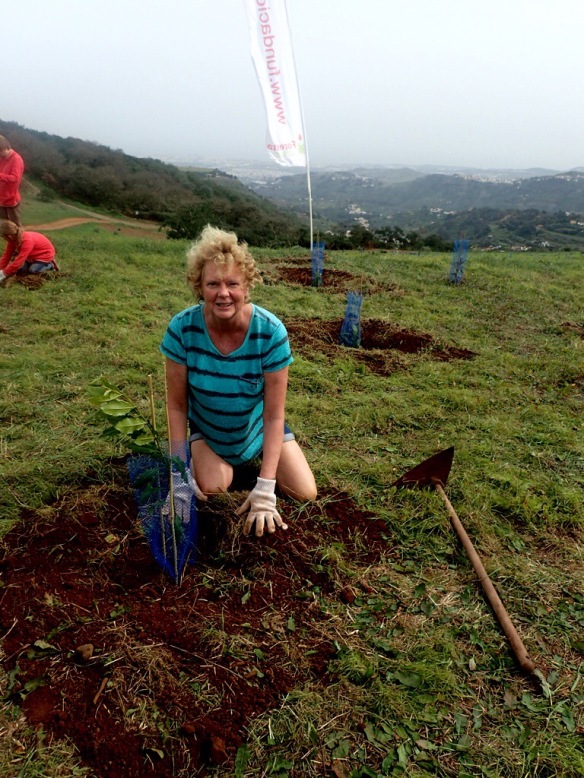 On Sunday we went on a friends boat to see the start of the ARC+. It was nice to get out of the marina and get some fresh air and to wish our friends, old and new, fair winds as they headed off to the Cape Verdi Islands.

The start line of ARC+

Their departure immediately seemed to put the pressure on the rest of us and now everyone is busy busy here in Las Palmas.

We have taken Raya for a run to test her engines. We ploughed up and down the shore taking the revs up as high as they would go and the good news was – no bubbles in the coolant. We have been to lectures on everything from managing emergencies at sea to provisioning, cooked the first few meals for the freezer, worked down the long list of stuff to check on the boat, done two more big shops and continued to party most evenings.

Tuesday we “dressed the boat overall” this means flying a string of the International signal flags from the front of the boat to the top of the mast and down to the stern. All boats are asked to do it to add to the overall feeling of celebration in the marina. Each flag represents a different number or letter and often has a further meaning, for instance the blue and white A flag means ‘diver below please keep clear’ or the yellow Q flag means ‘this boat is healthy can I clear into port’. I had spent a concentrated afternoon in Lanzarote stringing them carefully together being especially vigilant to make sure they were all in the specified order and would all appear the right way up. Looking at some of the other boats there seems to be some debate as to which way up is correct, but the overall effect is very colourful.

Flags are not the only thing to be hauled to the top of the mast this week, yesterday I attempted to get Rick up to check our rigging. We had practiced it a few months ago using the winch on the bow, but this time decided to try with one of the electric winches in the cockpit. This turned out to be a bit of a mistake as the angle of the line entering the winch which we thought would be just about OK, turned out not to be and instead of flowing seamlessly around it tangled up. So there we were the winched jammed and Rick hanging about ten meters above the deck, after a moments panic all was well, luckily he had rigged a safety line and with the help of a friend he was easily dropped back down to earth. Lessons learnt and to ensure we got straight back on the horse, I winched him back up by hand much more controlled but a lot harder work!

All the boats have been lent a yellow brick transmitter that will transmit our location right accross the Atlantic – our AIS can only locate us to within about 50 miles of a beacon most of which are on land. If you would like to follow us and the rest of the fleet you can do at – http://www.worldcruising.com/arc/eventfleetviewer.aspx
Make sure to select ARC 2015, not ARC+ 2015.