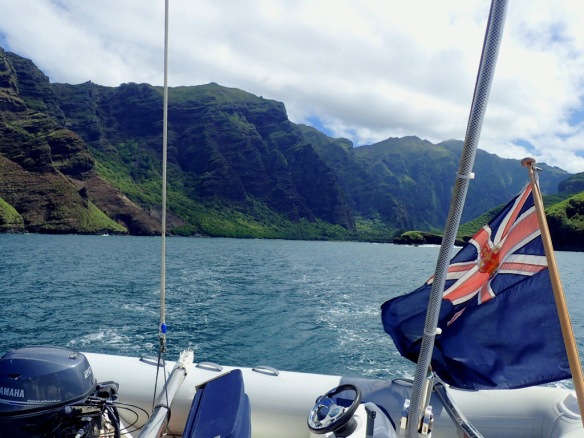 It was with a twinge of sadness we said a final farewell to the Marquesas. Impressing us to the end, the dramatic scenery continued as we sailed past the final island, Oa Pou, with its 3000ft spires of rock thrusting up into the sky it made a magnificent sight on the horizon. The Marquesas has to be one of the most visually stunning places we have ever been to, add to that the friendly cheerful people, the cleanliness and order of the towns and villages and the incredible flora and fauna and the rest of the Pacific has a lot to live up to.

Friday we finally left Anaho bay and returned to the main town Taiohae to stock up the cupboards, top up the petrol in the dingy tank and connect to the Internet. The plan was to leave Nuku Hiva early Monday morning, hopefully catching the promise of wind to take us the 520nm to Tuamotu.There was quite a bit of swell in the bay making the anchorage rolly and uncomfortable so we set to getting everything done as quickly as possible so we could move one bay down to Anse Hakatea or Daniels bay which looked more protected for our final couple of days.

The town dingy dock was full, we pushed ourselves between the crowds of other boats to reach the vertical ladder that takes us up the 6ft of concrete above us and the only way ashore. The supply boat had not been for a couple of weeks so the shelves at the shops were quite bare but our expectations are lower now and we felt happy with our purchases. To escape the rolling in the evening we went back ashore to the only restaurant in town, a pizza place, so used am I to spending evenings on one boat or another, as we approached the dock Rick noticed I wasn’t wearing shoes, to return to Raya would be bouncy and difficult, so in true Polynesian style I went to dinner barefoot.

We were up at six the next morning to see what we could find at the market and then went over to the fuel dock. Flush with tomatoes, Marquesian grapefruits, bananas and baguettes we set off. It was yet another beautiful and dramatic location, on one side of the bay the wall of rock rose vertically thousand of feet straight up from the sea. There was another pretty beach and the guide book tells us a 2-3 hr walk up the valley would bring us to a waterfall – the third highest in the world. Hot and tired from our busy few days we decided trekking could wait until tomorrow, turned on the AC and relaxed below.

Sunday morning however, found us fighting off a swarm of tiny flies, they were everywhere, in our breakfast, up our noses, covering every surface. Time to leave we decided, so instead of going ashore we readied the boat for departure. A manta ray with a 6ft wing span cruised by a few feet away to wish us farewell and by 10.30 the anchor was up. 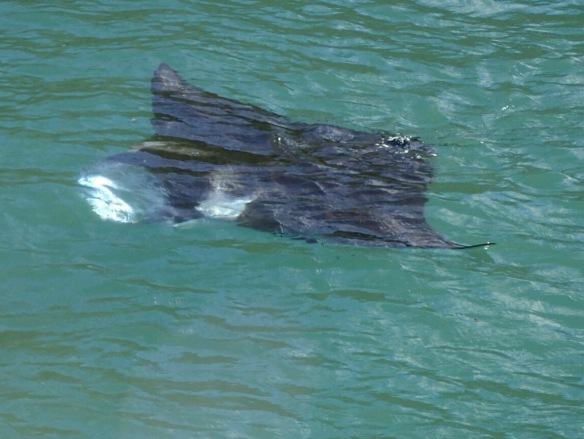 It is now 3am on our second night at sea, clouds are building low in the sky making it difficult to identify the horizon, I assume that if another boat appears it lights will be obvious in the blackness. We have seen nothing since leaving Nuku Hiva. We are trying out four hour watches tonight, more difficult for the person on watch but a larger lump of sleep in between might help keep us more rested.

We have had some great sailing with the wind just behind the beam in calm seas. At present we are doing between 7 and 8 kts in sixteen or so kts of wind but with the occasional gust in the middle twenties we have reefed the Genoa. Jupiter our constant bright companion since we entered the Pacific is setting to the west, the moon a wafer thin slither of light is about to rise in the east.

For the past week we have been gathering information and discussing with other cruisers the best time to enter the passes of the coral atolls. The atolls are rings of coral, on top of some areas are sandy islands but mostly the coral barely rises above sea level. Occasionally there is a break in the coral big enough for a boat to pass through. Most of the water that enters into the lagoon also comes in and out of these passes so it is important to go through them at slack tide. We are trying to time our arrival at Kaueli atoll, our first landfall, to between 9 and 11 am on Wednesday morning. With light winds forecast it is going to be touch and go.