As Tuesday night went on the wind gradually dropped, a marvellous sunrise filled Rick’s watch. We mulled over the old rhyme – red sky at night shepherds delight, red sky in the morning shepherds warning, did that only apply to shepherds or was it relevant mid Pacific Ocean? 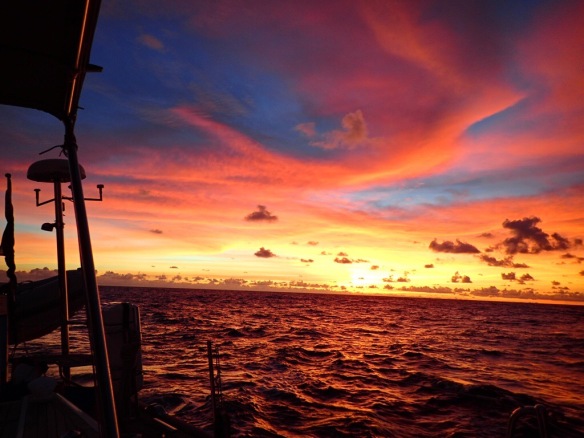 To reach our first destination, the atoll of Kauehi, at 9.30 the next morning and the slack tide to enter through the pass, we would have to average nearly seven knots which would mean motoring through the light winds. We spent an hour studying charts and guides and discussing our options. This is not that easy, unfortunately there is no definitive guide to the Tuamotu Archipelago and so it is a matter of cross referencing from the five or six different sources we have collected. To make things even more difficult we didn’t want to arrive at night or navigate through the inside of the atoll in low light. The lagoons are only roughly charted, coral heads abound, they are best crossed with the sun high in the sky and preferably behind you, when sea floor is most visible.

It quickly became clear that the likelihood of satisfying these optimum conditions was extremely low. Our alternatives were to, try to keep the speeds up and stick to the original plan, hoping we could make it in time and the cloud would lift. Sail pass Kauehi to the next atoll, Fatarava, the second largest in the group with a large northern pass that was apparently OK in almost all conditions and states of tide. We could turn north and go to one of the northern atolls which should have slack tides later in the morning or we could enter Kauehi on slack high tide at about 3pm and risk crossing to our anchorage in fading light. Finally we could slow right up spend another day at sea and aim to arrive Thursday morning.

We decided to stick with plan A, we turned on the engine, optimised the sails as best we could and motor sailed towards Kauehi. The rods were out, the day before we had hooked a tuna that escaped just metres from the boat, we were hopeful in the calm sea that we would have fish for supper. It was not to be, we did catch something but it was much bigger, it quickly snapped the line taking yet another of our diminishing selection of lures. It was a shame the engine was disturbing the peace, Tuesday turned into a fantastic day. The flat sea sparkled a deep blue, frequent fluffy white clouds gave us respite from the sun, all was well with the world.

Wednesday night however proved to be a different matter, during my watch in the early hours of the morning the non existent winds picked up a bit and moved around to the west. We haven’t see winds west of south since we left Las Palmas, I reset the sails and pushed on. When Rick took over the watch the winds had died down again, he noted in the log book for 4am, winds of 1.4 knots. Suddenly the breeze picked up and reverted to the SE, the sails came out, the engine went off. Within ten minutes everything went bonkers, the wind was gusting up to 36kts and the calm sea turned messy. There had been no warning, no rain and no obvious darker clouds, as we sailed on the weather turned squally I guess we had been passing through a front. Luckily it was Rick on watch, he reacted quickly, all was ok.

There was one upside to the change in conditions we were now storming to our destination. As we approached the atoll the weather had improved slightly and we spotted the AIS of another boat about to exit the pass. We watched him carefully and called him on the VHF, he confirmed there was still an outgoing tide and he had been spat out by a 4kt current. Half an hour later and dead on our guesstimated slack tide we motored through the pass in calm water with the help of a half knot from the new incoming tide.

Once inside we had two choices, the well trodden, charted path to the only inhabited part of the atoll or a couple of waypoints that we were assured lead safely to an idyllic, protected anchorage in the deserted SE corner. The sky was cloudy but bright, buoyed by our easy entry through the pass, we decided to take the adventurous path and headed south. We met no obstacles and are now anchored in 10m on sand, clear of coral heads that may snag our chain, off our very own desert island. The conditions have continued to be stormy but the sea is dead flat and Raya is stock still, not such a bad place to wait for a change in the weather.

1 thought on “Timing the Pass”