﻿As I said in my last post, seemingly at every turn in New Zealand there is an amazing vista

And some are especially amazing 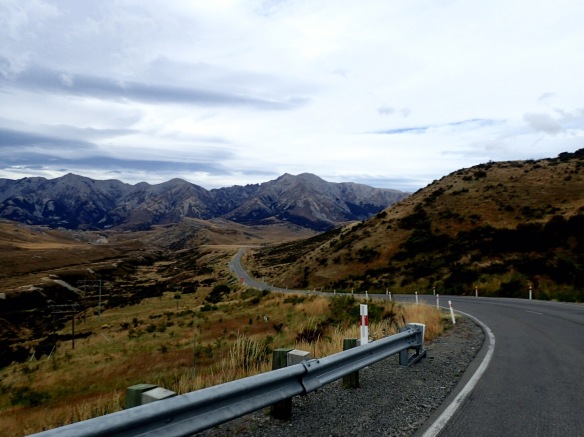 But today we came over the brow of a hill and swept around a bend to the view to challenge all views. 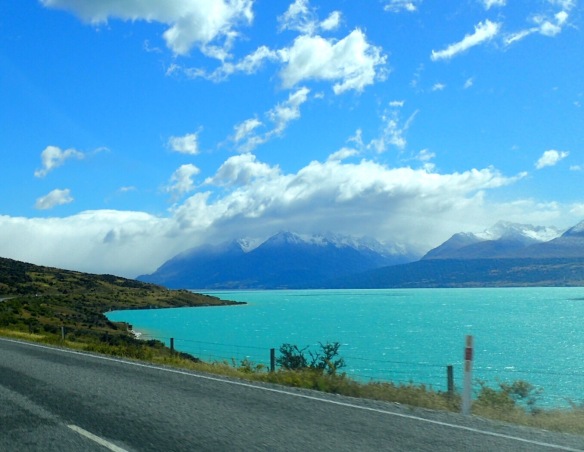 We set off Saturday morning south towards Murchison and on to Brunner Lake. This is logging country and the steep hillsides are lined with pines, areas of cut trees scar the otherwise rich scenery. Cutting through the hills are deep canyons worn by fast flowing rivers, impressive even at this time of year, the vast dry river beds indicated how powerful they must be during times of high rainfall. The Buller is one such mighty river and like the rest of the area has a history of gold prospecting, early in the twentieth century a daring plan was implemented to build a bridge to reach the untouched potentially gold rich rocks on the opposite bank. The longest swingbridge in New Zealand it’s modern version is a tourist attraction. 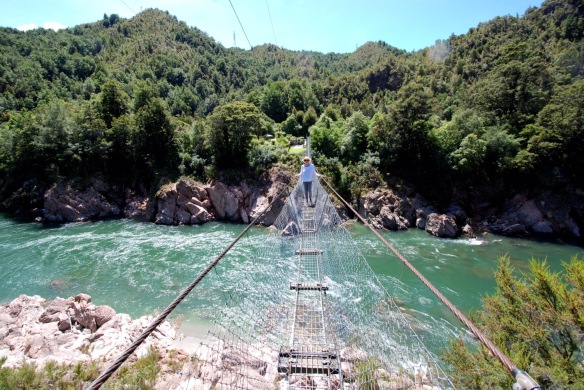 We woke the next morning to drizzle and temperatures of just 11 C. We were crossing the Southern Alps driving through Arthur’s Pass and as we approached the mountains loomed threateningly through the gloom. Somehow the scenery still delivered, the pines had been replaced now by native mountain beech, the tops of the mountain above the tree line was of sheer grey rock and the valleys rough browning grassland. The road climbed steeply to its highest point of 920m before dropping down more slowly towards the east coast following wide winding river valleys.

As we descended the weather began to improve and we decided to stop off to explore the huge sandstone boulders at Castle Hill. Reminiscent of Stonehenge, these were natural artefacts of the areas mountain building past. Up close they were much bigger than we appreciated, they were great fun to clamber round and very photogenic.

As the weather had dissuaded us from stopping at the top of Authurs Pass we had a bit of extra time and decided to take a detour into Christchurch. We were surprised to see the centre of town is still in ruins from the large earthquake that hit the city six years ago. It was sad to see the extensive damage and continued deterioration of the Cathedral and surrounding old buildings, it appears that wrangling between the Church and the City council has led to years of inaction.

We have spent the last two days back in the Southern Alps and sorry to repeat myself but the scenery is just incredible. High plains of varied grasses and gorse like shrubs, backed by snow capped mountains, the tallest of which is Mount Cook at 3754m and punctuated by large lakes created by the damming for hydroelectric power of the many rivers flowing out of the mountains. If that wasn’t enough theses lakes are a remarkable blue, a result of ‘rock flour’ – finely ground particles of rock brought down by the glaciers and suspended in the melt water. After the clouds of yesterday we woke to a view of Lake Tekapo with Mount Cook in the distance.

Todays plan was to walk right up in the mountains. We drove around another ridiculously turquoise lake, Lake Pukaki, oohing and aahing as the peaks came closer and closer, up to the base of Mount Cook.

The weather in the mountains is very unpredictable, we had a glorious morning, chilly but bright and sunny, in the thirty minutes it took us to walk towards the Glacial lake that feeds the Tasman River, however, the clouds had descended and the rain started. We took a few pictures of the icebergs that break from the glaciers in summer, zipped up our waterproof jackets and headed back to the car. Much fitter and braver people than us walk for days on the tracks that crisscross these mountains, wet and cold we felt like we had experienced a miniscucle bit of their adventures.

5 thoughts on “Into the Mountains”