We continue our zigzag across the South Island leaving the high Mackenzie country to head back to sea level at Dunedin and then return to the Southern Alps further south at Te Anua. As always there is plenty of interest and variety to keep us entertained as each day we pass another three or four hours in the car.

The hydro electric power developments of the upper Waitaki River provide a significant amount of New Zealand’s power. As we descended from the mountains towards the coast the dammed lakes run parallel to the road. Theses dams run out from the large lakes at the foot of Mount Cook where we were yesterday up in the mountains, the stored power is awesome and evident as the water thunders from one dam to the next.

After nearly a week inland the smell of the sea hits us strongly, we gravitated to the water front of Oamaru to stretch our legs and find an interesting stop for lunch. Oamaru is a pleasant seaside town with more than it’s fair share of the stone buildings that are so rare in New Zealand. Mostly built towards the end of the nineteenth century from the pale, local sandstone, they give the town a more familiar look to our European eyes and a sense of permanence that many of the other towns we have been through don’t seem to have.

When researching accommodation for each nights stay, it was usually a compromise between convenience, price and availability but in Dunedin I spotted the place I should pick immediately – Roslyn Apartments, sitting in the hill suburb of Roslyn Village looking down on Dunedin. They weren’t our most luxurious stop but did the job, unfortunately the owners weren’t impressed enough with the coincidence to give us a discount. A discount we could do with, news from the boatyard is good in that they aren’t finding any unexpected problems but, as is always the way with boats, the costs are turning out to be way above what we expected. Rick sits studying the jobs list looking for savings, what can wait, what could we do ourselves?

Our main reason for coming to Dunedin was to see the Albatross colony, the only mainland colony in the world. Ever since we glimpsed them soaring above us as we sailed towards New Zealand last October, I’ve been keen to see them a little more closely. You can see the nests and watch them from land but we were advised you get a better experience from the sea, so we bit the bullet and took a tour, an hour long boat trip around the end of the Otago peninsula where the birds nest. It didn’t disappoint we were surrounded by half a dozen different types of Albatross including the large Southern Royal Albotros with its 3m wing span.

On the peninsula, a haven for coastal wildlife, we also spotted fur seals and plenty of other birds including the aptly named Royal spoonbill, spotted cormorants and white faced heron. 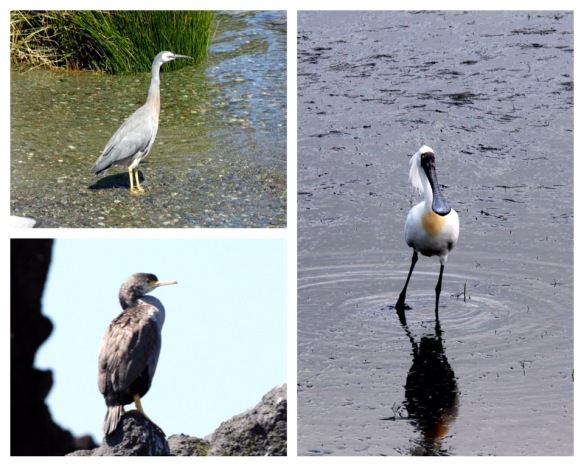 Loving the sea birds as always.

Today we left Dunedin to head fo Te Anua, we had a choice of roads, the main state highway or the scenic route. Rick has a cold and is feeling a bit under the weather so we decided on the easier and faster option. This took us across a large stretch of farmland. Amongst the odd field of crops were fields of sheep, cows and more sheep. We spotted fields of horses, even fields of deer and one field of geese and of course more and more fields of sheep. We passed signs advertising shearing equipment for rent, merino wool clothing straight from the farm, livestock veterinary services and the rather brutally named Southkill Abattoir

Gradually the hills steepened and we caught glances of snow capped mountains. Another day, another stunning lake. 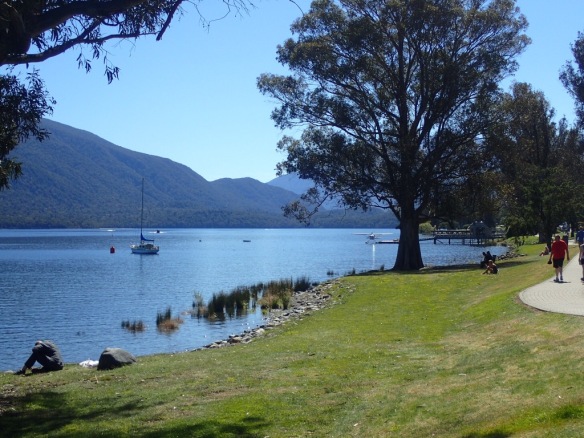 4 thoughts on “Otago and Southland”