Rick has spent much of the past week working in a variety of confined spaces, contorting his stiff joints around corners, down steps and inside small holes, undoing tight bolts and jammed screws, sealing leaks and changing oil, pulling out rusted in impellers and testing batteries. We are tied up back at the Cruising Yacht Club Marina and working our way through a long list of jobs before we leave for Perth tomorrow.

Fixing a fuel leak on the generator

With the generator oil changed and a drip from the fuel pipe sealed, next on the list was changing the engine impeller, unusually for Rick this job defeated him, not able to squeeze into the right position to apply all his strength he just couldn’t get it to budge. What was needed was an engineer who knew all the tricks of the trade and someone perhaps, dare I say, a little younger and more flexible. Fortunately we found one such person that could pop in that day and after much huffing and straining he finally freed it and put in a new one,

Not wanting Rick to suffer his aches and pains alone, Thursday I somehow managed to trip on the pontoon. My fall was particularly ungainly as my main concern was to ensure the backpack I was wearing, that contained as well as groceries a years worth of contact lenses, didn’t end up in the water. Gratefully no one was around and I could escape with, if not my body, at least my pride intact.

So it was that Friday morning found us hobbling up the hill to the station, Rick with tired knees and a stiff back, me with grazed knees and bruised ribs. We were off to catch the train for the 2 hour journey out to the Blue Mountains. Near the top of my list of things to do in Sydney it had been pencilled in for a while, so despite the jobs still to be completed and our rather battered bodies, we decided to carry on with our plans.

The views were incredible. The high plain of sandstone has been eroded over millions of years to create a large canyon like valley. Cracks in the rock and intermittent layers of claystone, coal and shale, that are more easily washed away, have caused the sandstone sides to collapse forming vertical cliffs and striking pillars. 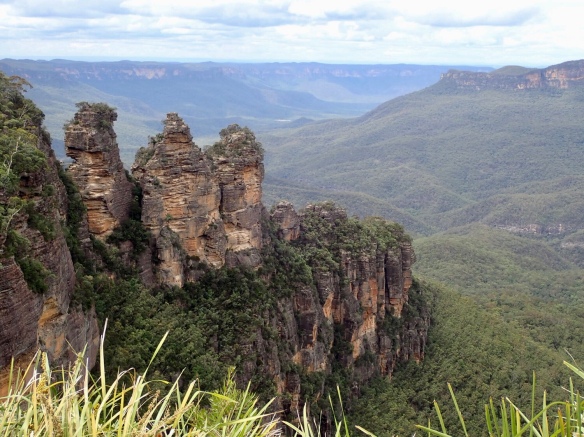 Pillars of rock known as the Three Sisters

We made the mistake of starting our day at the crowded Scenic World. A tourist attraction offering cable cars, skyways and the steepest railway in the world. It would have been a good introduction to the area had it not been full to bursting with coachloads of tour groups. It wasn’t until we escaped along the Prince Henry Cliff Walk that we could really appreciate the full grandeur of the views and the tranquility of the eucalyptus forests. If we were to do this trip again we would start with this dramatic walk giving ourselves more time to enjoy the waterfalls, cascades and trails further along the escarpment.

Walking along the Prince Henry Cliff

However as we had paid for the tickets we returned to Scenic World and took the small train, descending almost vertically into the valley. Protected by the surrounding cliffs from the harsh drying winds and extremes of hot and cold, the valley has its own unique microclimate and is home to a rain forest. We wandered along a boardwalk through tall trees, thick vines and thousands of wonderful large tree ferns, peering up through the canopy to the sheer rock above us. Thankfully there is a cable car back to the top and a hop on hop off bus to return you to Katoomba and the train home.

Wonderful tops of the tree ferns

Back onboard it was back to work. When sailing towards the marina last week the starboard primary winch suddenly started to make a horrible screeching noise. Rick, happy that he could work in the open and especially not on his knees, carefully took it apart, cleaned each of the 27 components, regreassed and oiled as appropriate and put it all back together again. Still the winch screeched. With stoney face and a certain amount of muttering, off it all came again, eventually he traced the noise to the gear coupling to the motor. He was in for another afternoon working in a tiny space, balancing on one leg, bending around the toilet and stretching past cables to remove first the ceiling panels, then the motor. The motor is very heavy and unfortunately his assistant has more brains than brawn and couldn’t reliably take the weight while he battled with the bolts. As luck would have it, in between being engineers mate, I was defrosting the freezer and with the available freezer baskets and books of varying thicknesses we managed to construct a tower to support the motor as it was removed and reattached. After a top up of oil and a thorough clean of the coupling, thankfully it ran perfectly.

Today’s big task was to take down all the canvas work, so it could be sent to the trimmer for a few bits of repair and two zip replacements. We are so use to being cocooned by the sprayhood that it is very odd to sit with a 360 degree view totally exposed to the elements. Luckily the day is pleasant and with just the watermaker to pickle, the bathrooms and kitchen to clean, the decks to tidy, etc. etc….. tomorrow we off on holiday.

5 thoughts on “Mountains of Maintanence”