We are feeling rather frustrated. After we and the antifoul crew have worked our socks off, dodging showers and running from pillar to post, to ensure Raya is ready to return to the water at 3pm today, we have just been told that they have messed up and our berth in the marina is not available. So here we are stuck high and dry, 15ft in the air until Tuesday. 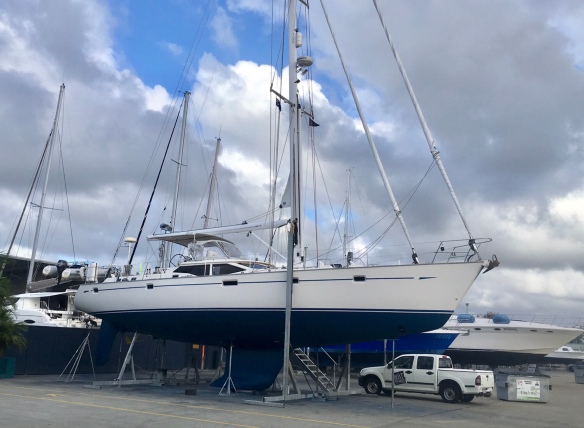 Ready to be lifted back onto the water

I think it’s fair to say it’s not been one of our most restful weeks. Things started well with a drama free overnight passage up from Coffs Harbour. There was little wind, the large swell, lingering from last weeks storm, undulated gently across a calm sea. Stars shone brightly in the dark moonless sky and as we are gradually creeping back north, the night watches have become pleasantly warm.

The easterly swell did make the Gold Coast Seaway entrance a little lively however and things were not helped by having to share the constricted space with a fleet of racing sailing dinghies, several returning small fishing boats and a group of mad jet skiers. We headed expectantly into the calm of the inner channel – the Broadway, only to find it full of more jet skiers and dozens of fast motor boats. It was Saturday and everyone and their dog was out enjoying the sunshine. The anchorage, just north of Southport Marina where we five months ago had checked in to Australia, is charmingly known as Bums Bay. It was also very busy, especially the blue buoyed area directly in front of us, that turned out to be a jet ski practice course!

We were tired from our trip, we put on the anchor alarm, turned on the cabin fans to block the noise outside and went to sleep. We only had to cope with all the activity until Monday morning when on the high tide we would make our way up the Coomera river to Boatworks, Raya was to be hauled out for her yearly once over.

Sunday morning dawned fine and bright and soon the crowds began to reappear. We had anchored next to our friends from Paw Paw and decided to go ashore together to escape the noise and increasingly choppy waters for a few hours. It’s nice in our transient life to revisit places occasionally, having a bit of local knowledge from our previous stop in the area. We returned to the waterfront Thai restaurant for lunch and walked back along the expansive Main Beach.

Walking on Main Beach with Elaine and Roy from Paw Paw

At seven the next morning while doing his normal pre-trip engine check, Rick noticed a leaking coolant pipe. While lifting the anchor I discovered the anchor down switch wasn’t working and with a very tight schedule on the tidal river we had the potential of the perfect storm – an overheating engine, no ability to anchor and quickly swallowing waters. Our normal cautious selves nearly abandoned the trip but we really wanted to make our hard won appointment with Boatworks. With the judicious use of tape to slow the leak, I steered us through the shallows of the river while Rick worked to sort out emergency use of the windless so if necessary we could drop the anchor. Two hours later with a sigh of relief we tied up to the dock and prepared Raya to be lifted.

We were last antifouled, just over a year ago and were hoping the hull might be in decent condition but it was definitely in need of redoing. 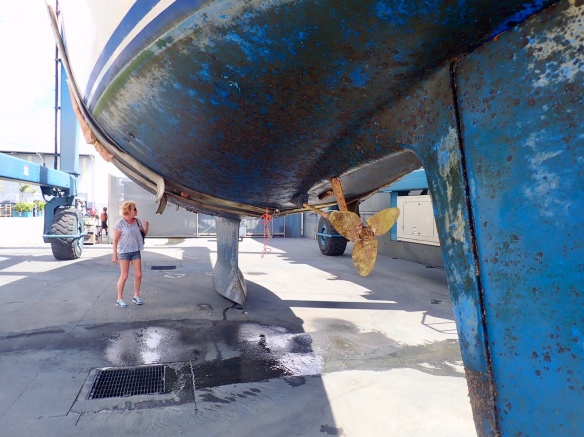 Our time on the hard was tight, particularly with plenty of rain in the forecast, it was full speed ahead. As Rick fixed the leaking coolant pipe, checked the seacocks, replacing one, greased the prop and investigated the windlass. Complete Antifoul services, cleaned and repainted the bottom, cut and polished the top sides and replaced the cutlass bearings. I organised for the life raft to be serviced, battled to keep the water cooled fridges from over heating, started filling the numerous forms required for entry into Indonesia and ordered new lenses for my damaged varifocal sunglasses – who knew that eyelashes could be so abrasive. 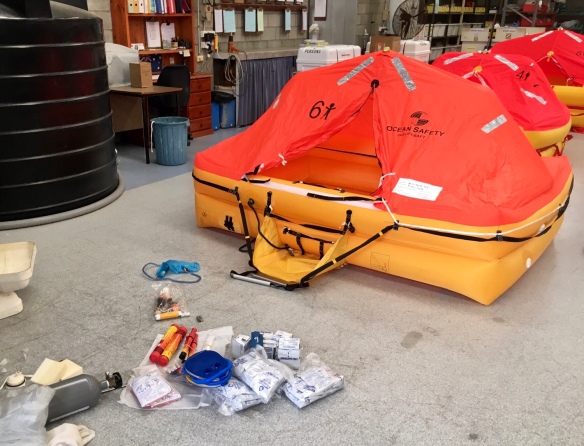 Watching the life raft being checked

So here we are clean, shiny and ready to go back into the water but with no berth to go into it looks like it’s going to be a further few days of washing up in a bucket, lovely.

5 thoughts on “High and Dry”