We are circumnavigators, on Tuesday morning we sailed into Port Louis Marina on the Caribbean Island of Grenada, where 3 years and 45days ago we had set sail for the Panama Canal and the Pacific. We have been swamped by messages of congratulations and have been toasted with champagne but I’m not sure our achievement has really sunk in.

We are being very kindly treated to a week in a luxurious villa, with Jonathan our sail mate, his wife and my sister and husband. Slowly we are unwinding but the last few months of continuous sailing have taken its toll and we feel pretty tired. 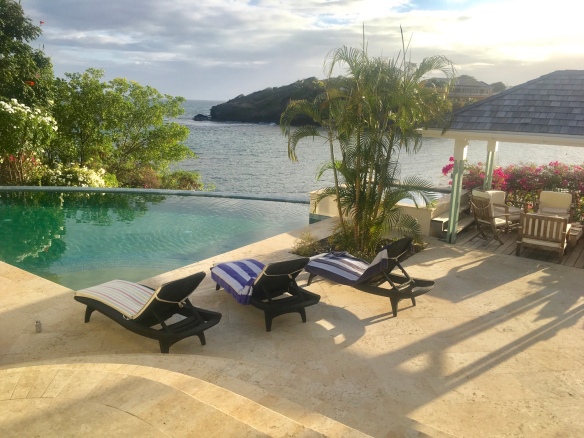 The pool at our lovely villa in Grenada

The second half of the passage from Ascension was much windier than the first half. Having cleared the squalls the sea calmed down and for a day or two we enjoyed perfect trade wind sailing. With the sea flatter Jonathan put the rods out and we finally had some fishing success catching a small tuna and a few days later a Mahi Mahi.

The days rolled by, sleep, watch, eat, read, eat, sleep, crossword, eat sleep, watch……. We sailed on in our ever changing disc of blue, some days calm others a mess of conflicting waves, the oceans colour varying with the sky from deep ink blue to somber grey. The moon gradually reduced to a slither that rose later and later each night and as the nights grew darker we were treated to skies of a trillion stars.

We were mostly completely alone, the occasional brown booby flew close catching the flying fish we disturbed with our wake and a few AIS targets passed by on the chart plotter but too distant to appear on our horizon. So it was rather a shock when, with our waining vigilance, we spotted a fishing boat less than half a mile away. It had no AIS, in fact, covered in rust, it’s waterline thick with algae, for a moment we thought it may be abandoned but no, tossing wildly in the waves it’s crew valiantly fished on.

Ever since the equator we had been sailing through increasingly large patches of free floating, bright orange Sargassum seaweed. With no engine running it wasn’t a problem for the propellor, but we sat aghast trying to imagine how many acres of ocean it must cover, hoping that it was at least using up lots of carbon dioxide to help the atmosphere. 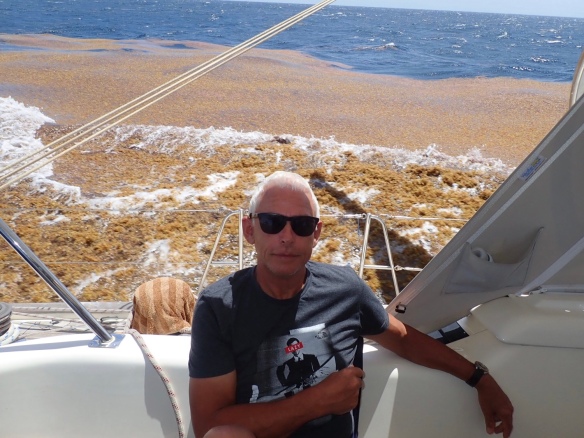 We were sailing fast which meant our eta had us arriving the morning before the arrival of our welcoming committee, who were flying in from the UK Tuesday afternoon. But after 15 days the thought of slowing up and spending an extra night at sea didn’t appeal to us, we pushed on. Until suddenly, and against every chart and source of information we had for this area of water, we encountered a negative current and for 36hrs we stared depressingly as our speed over the ground struggling to reach 7kts. Thankfully about 200nm from Grenada the current firstly went neutral and then positive, at times we screamed along at 10 knots towards the finish line.

The traffic had increased also, not only more fishing boats, with and without AIS but tankers and cargo boats, plying their way between the Americas and Africa or the Far East. The radio sparked into life with a large drilling platform calling up to ask us to leave them a minimum perimeter of two miles as we passed. On our final night we had to call up two cargo boats to ensure they were aware of our presence and as always they were happy to change course to give us plenty of space.

Tuesday morning we arrived off the SE corner of Grenada, land ahoy was excitedly written into the log. But we weren’t quite there yet, blackening skies and high winds built as we approached the island, overfalls tossed us about and we had to slow to let the rain pass so we could prepare the boat for docking. Then we faced the challenge of the complicated mooring system at Port Louis Marina, it was with a sigh of relief we secured the final line.

The ‘got here beer’ tasted good but not as good as the Champagne we shared with our friends that evening. We’d made it, we’d sailed all the way round.

24 thoughts on “All the Way Round”