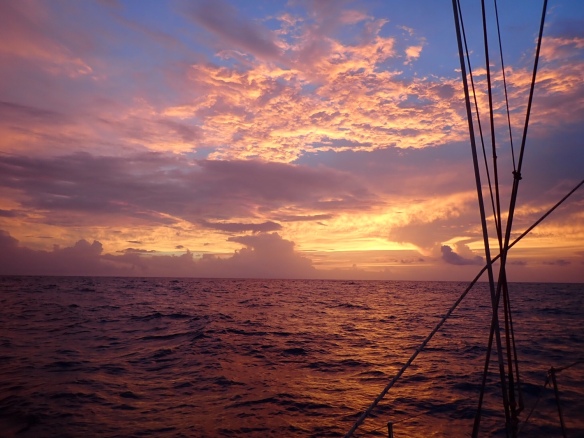 Raya is back in the Northern Hemisphere. We crossed the equator about 400nm off the Brazilian East Coast heading for the Caribbean and celebrated the event with four glasses of bubbly, one each for the three of us and, as tradition dictates, one over the side for Neptune. Strangely it is almost to the day exactly three years since we crossed the equator going southwards in the Pacific. 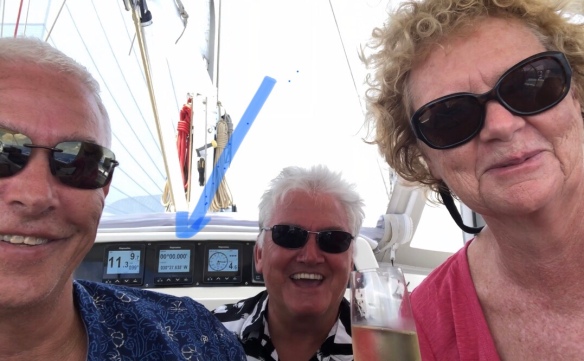 We left Ascension Island under blue skies, with light winds and calm seas. A nice easy start while we settled into the pattern of eating, sleeping and night watches that would be the rhythm of our lives for the next 18 days or so. The going was a bit slow but we were saving our fuel to help us through the Doldrums.

Either side of the equator in the tropics run the trade winds, winds generated by the rotation of the earth that blow from the NE in the northern Hemisphere and SE in the Southern Hemisphere, we have been enjoying their consistency for most of our trip and they are the reason for our westerly circumnavigation. Running around the equator however is the intertropical convergence zone, the ITCZ. Here the winds drop dramatically, historically the doldrums were dreaded by mariners as they could become becalmed for days on end. These days with most yachts equipped with an engine it is more a matter of motoring through them as fast as you can to pick up the winds on the other side.

We motor sailed for a couple of days before the wind picked up a little and we managed to sail for a while. Friday evening however the wind dropped again, but when we turned on our engine, we were assaulted by a loud and worrying banging from the prop. As we crossed the equator we had thought of taking a mid ocean dip but decided there was a bit too much swell, now it looked like Rick would be getting wet after all. We sailed slowly through the night until at first light, equipped with his mask and a knife he went to investigate. For the past few days we had been passing through dense patches of weed, and to our relief it was this that was entangled around our prop and the simple act of stopping the boat freed it up. Rick stayed down to check things were ok before we continued on our way.

Where the trades meet the ITCZ there is often an area of unsettled weather and unfortunately as we sailed through the northern boundary we had 36hrs of squally conditions. Ominous dark clouds would continually build on the horizon and we’d watch as they either scooted past, missing us or relentlessly approached. Each squall brought high winds that backed northwards and torrential rain that fell for about half an hour. With light winds between them the trick to not getting continually soaked was to reef the sails with the wind increasing just before the rain arrived, this was not always that easy. On the upside our decks that were still covered in dirty South African dust have been cleaned beautifully. 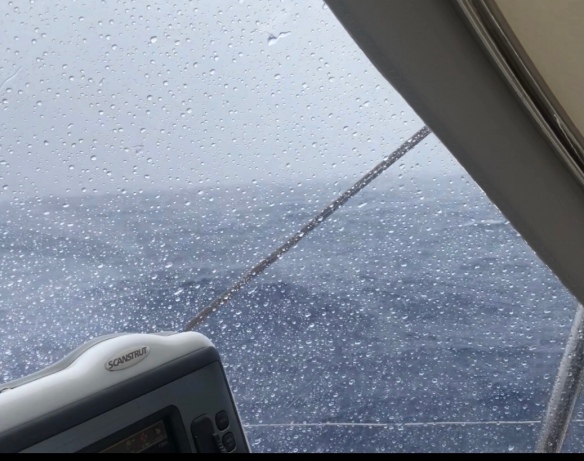 Another squall comes through

Thankfully we are now through the squalls and are picking up the northeasterly trades which, with an accompanying current, are whisking us quickly towards Grenada. Just over three years ago we took off form Grenada for the Panama Canal and the Pacific Ocean, as we arrive back we will cross our outward track and unbelievably our circumnavigation will be complete.

For now however we have another week or so of sailing to do. We are pretty low on fresh fruit and veg but have plenty of frozen meals, we are all swapping Kindles to ensure everyone has plenty to read and we are becoming better and better at the four o’clock crossword. Raya as always is preforming well and our spirits are buoyed by a continuous stream of entertaining emails from home. The sight of land however will be very, very welcome.

11 thoughts on “Back in the Northern Hemisphere”