Ascension Island turns out to be a place that is far more captivating than first appearances would lead you to believe, from the tropical cloud forest covered peaks to its pristine beaches, from the large Greenback turtles to the land crabs, even the sun sets have been special.

The passage from St Helena was very slow and rather frustrating. The winds were light, under normal circumstances we would have resorted to the engine but obtaining fuel in Ascension is difficult and with a further 3000nm to go until Grenada every drop of diesel is precious. Ever since our return to the boat at the beginning of the year we have had one date that has been driving our schedule, the 9th February. With only one flight a month into Ascension Island this was the day, our good friend Jonathan, would be arriving to join us for the trip to the Caribbean. With little tourism there are no hotels on the island so our arrival to pick him up on time was particularly important. We sailed into Clarence Bay the anchorage off of Georgetown, the capital of Ascension, at first light on the 9th just a few spare hours before Jonathan’s arrival that afternoon! 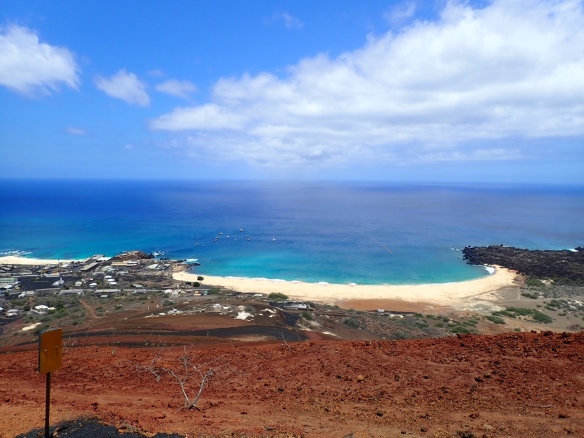 When I describe Georgetown as the capital of Ascension I should point out that the population of Ascension is only about 800 people. There are only four areas that could be classified as towns, the American base, Georgetown and two small villages. Georgetown has a few houses, a shop, a church, a bar, a police station, the main government offices and little else.

And when I say that the Island receives few tourists, I should explain that so rare is their presence that when we checked in to all the normal authorities not only were we expected but everyone knew Jonathan would be flying in to join us.

Further the shop mentioned above is not exactly Tesco’s, its few short aisles are rather bare and any hope of finding fresh food were quickly dashed. Our diet for the next few weeks will be interesting to say the least. The bar, and our access to internet, has turned out to have rather erratic opening hours and the lasting memory of the much talked about cafe on the American base that we visited last night, will be the delightful aroma of deep fat frying that lingers on our clothes.

Despite all this we have had just the best time, we are so glad we stopped. The people, all in some way employed by the military or the island government, couldn’t have been more helpful and friendly. And the scenery and wildlife have been really special.

Ascension unlike St Helena has some spectacular beaches. The central peaks of the island are surrounded by barren lava fields, and industrial signs of the islands military status are everywhere, oil storage tanks, radar domes, huge arial fields, secret Sam type warehouses etc. etc… so it is wth surprise that you suddenly find yourself enjoying the sight of a stunning beach, the turquoise of the sea and the white of the sand exaggerated by the blackness of the rock.

Its not only humans that enjoy this coastline every where there are warnings that sharks frequent these waters. Intrepid as we are and avoiding the high risk times of dawn and dusk we have swam and snorkelled most days. 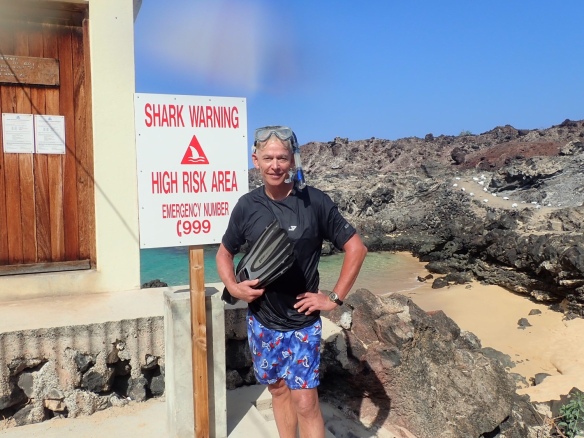 Visitors of a more gentle nature are the large Greenback turtles that incredibly swim the thousand or so miles from their feeding grounds in Brazil to lay their eggs in the soft sand, particularly on Long Beach right in front of the anchorage. By day they swim around the bay popping up next to us with the familiar puff as they breath out at the surface. By night the females climb up the beach and begin the laborious process of creating a hollow above the tide line, laying and then covering the eggs. Monday night we joined the conservation team, carefully making sure not to frighten the females climbing up the beach. They found, in red torch light, a female in the middle of laying, she weighed in at about 200kg and 115cm long. Once the nest has been dug, the turtles go into a trance like state and are not disturbed by an audience, so we were able to watch for half an hour before leaving her as she began to shovel sand to cover the eggs and gradually wake up.

Tuesday found us walking near the 859m peak of Green Mountain. Now a lush rain forest it has an interesting past. Seen by some as an innovative ecological terraforming experiment and by others as the worse type of man made biological invasion, over the past couple of centuries the mountain regions have been transformed from a sparsely vegetated arid area to the luxuriantly green landscape that gives the mountain its name today. In 1836 Darwin visited the island and noted the lack of vegetation and the complaints of the British marines that the island was “destitute of trees” on discussions with his friend Sir Joseph Hooker, later to become director of the Royal Botanical Gardens at Kew a plan was hatched to increase the vegetation. Plants and seeds from all over the world were planted and the survivors remain to create this unique environment.

Walking on a Green Mountain

The islands other highlights include the bright yellow land crabs, crisp horizons that gave us a brilliant ‘green flash’ one sunset, clear rich water from which Jonathan supplied us with an iridescent green Dorado for lunch, amazingly caught from the dingy and donkeys that seem to require refuelling at the local petrol station.

Only customers at the petrol station

Tomorrow we leave for the Caribbean and will be at sea for nearly 3 weeks. Follow us on the tracker.

5 thoughts on “Green Highlights in Ascension”