Stunning views all around St Helena

St Helena, just a speck on the chart of the South Atlantic Ocean, is home, for a few month each year, to magnificent 10m long whale sharks. Nobody knows why they gather here or why for hours on end they come up to near the surface of the water and seemingly just float about. But for the few visitors to St Helena this behaviour means we get to see them up close and personal.

We arrived in James Bay at 3pm last Thursday and were almost immediately summons to the authorities so they could process our papers before the end of their working day. St Helena, at least when there are yachts moored n the Bay, has a very convenient ferry service that runs between the boats and the yacht every hour. Stepping off the ferry that surged up and down about a metre next to the dock, on legs that had been at sea for over nine days was not easy but we made it. We cleared customs and Port control filling out the normal raft of forms and then in the afternoon heat trudged up the hill to immigration sited at the police station.

We needed refreshments, in town we spotted an Edwardian hotel with, on its first floor, behind wrought iron filigree railings, an inviting breezy balcony. We sat and took in our surroundings over a very welcome cold beer. Jamestown is a thin strip of urbanisation running down a gully between high steep cliffs. The majority of buildings and houses which mostly seem to date from the late 19th century, cluster around the one main street, whilst the newer developments perch on the cliff tops high above. 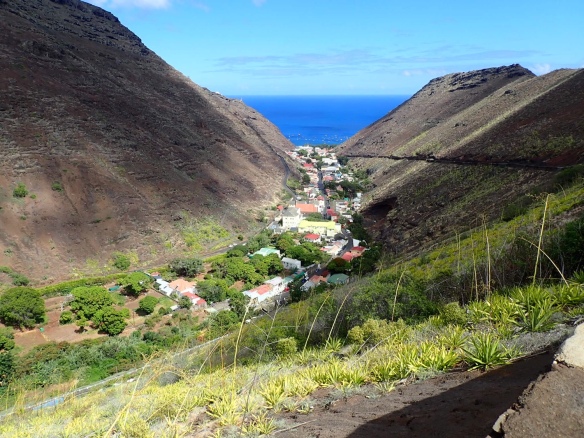 The islanders are a rich mix of ethnic backgrounds, reflecting the history of the island as an important staging post for shipping heading east and west around the Cape of Good Hope. Everybody seems to know everybody else and life is led at a slow island pace.

Running impossibly steeply up the hillside is the infamous St Helena ladder, an almost vertical set of nearly 700 steps that rises straight up from the town, challenging visitors to climb it. I’m so glad we decided against it, if my vertigo thought climbing up would be difficult, standing at the top, a couple of days later when we visited it as part of our whistle stop island tour, it looked to plummet straight down.

As is the way in small communities the ferry man turned out to be the man who also ran the whale shark trips, so on the return run to the boat we booked to go out the next morning. The dive boat retraced our track, following the sheer rock faces that we sailed past on our way in accompanied by lively spinner dolphins the day before but this time it was the telltale shadow in the water of two whale sharks that caught our eye. Their fins and tail tips cut through the surface Jaws style, but unlike Great Whites, Whale Sharks are plankton eating placid creatures. We slipped in and they seemed happy to just swim along with us. The trip was very well regulated with no more than 8 swimmers per shark and a limit of 40mins with them each day. It was such a privilege to be able to interact with them so closely, these amazing animal encounters are without doubt for us the highlights of this trip.

Raya, with the pressurised schedule we’ve had for the past month, has become rather high maintenance and the weekend turned out to be no different The high pressure hose that feeds the watermaker has starting to split . We quickly filled our tanks with as much water as we could before Rick dismantled the offending piece and with the help of what appeared to be half the island tried to find a solution. They almost got there but were one connection short, luckily he had time to order what hopefully will be the right bits to be delivered to Jonathan who flies out to meet us tomorrow.

We couldn’t visit St Helena without seeing a bit more of the island, so putting down his tools for a few hours, we took a quick tour of the Island. Our guide had spent almost all of his 82 years on the island and was extremely knowledgable. St Helena’s greatest claim to historical fame is as the place of exile for Napoleon. Napoleon spent the last six years of his life, surrounded by members of the French court, in a large villa with exquisite gardens and extensive views. In fact the views everywhere on the island are fantastic, steep green valleys, forest covered peaks and dramatic rock formations all surrounded by a sparkling blue sea. Not too bad a place for a prison cell.

Napoleon’s residence while in St Helena

In between times I was trying, mostly unsuccessfully, to buy some fresh supplies. Luckily we still had some fruit and vegetables left from CapeTown, but that after another 5 days at sea is now almost gone, fingers crossed we will find more on Ascension Island for the 3000nm passage to Grenada.

7 thoughts on “Swimming with the Whale Sharks”